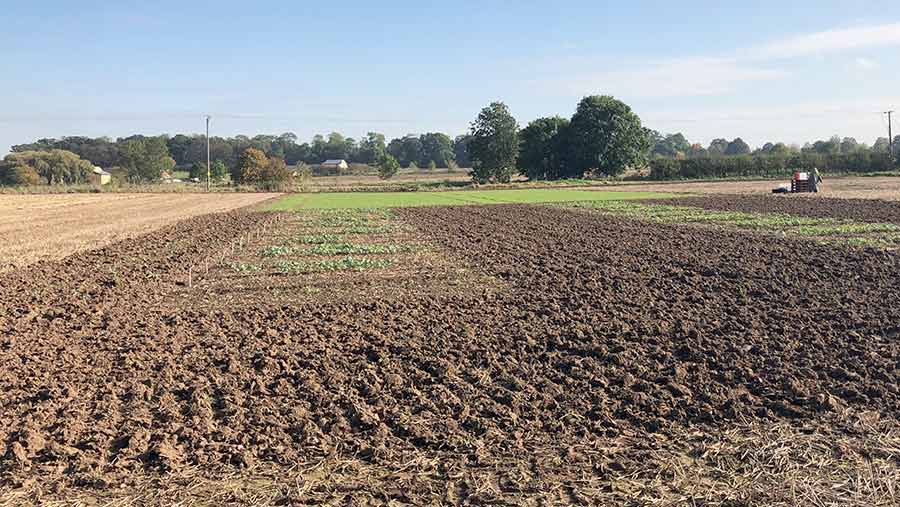 From www.fwi.co.uk: A soil-borne pathogen found in wheat and oilseed rape crops can cut rapeseed yields by up to 50%, and experts suggest growers need to look at longer rotations and cultivation techniques to control its spread.

Crop pathology expert Rumina Ray, from the University of Nottingham, explains that the pathogen has been underestimated and is now a clear problem for UK oilseed rape growers.

“Rhizoctonia solani is an overlooked soil-borne disease and its effect on oilseed rape crops has been ignored. Crop losses attributed to establishment failure due to pests or other soil-borne pathogens could, in fact, be the effects of rhizoctonia,” she warns.

The pathogen damages the developing root system in oilseed rape crops, reducing taproot length, lateral roots and root surface area. Seedlings are most susceptible to the disease, and as the crop matures, plants become more tolerant.

Damping off is the most obvious symptom due to poor emergence, plant survival and establishment. Other early symptoms include thinning and stem elongation, known as “wirestem”, where roots become infected and stems appear brown in the middle.

Where there is high disease pressure, the pathogen can cut establishment by more than 80%, and also reduces plant  vigour and delays development, resulting in uneven and late flowering.

The pathogen containing the AG 2-1 isolates that infect rapeseed crops is commonly found in soils across England, with higher pathogen concentrations found in the North than in the South.

“AG 2-1 isolates are prevalent in 63% of wheat fields across England, and concentrations remain consistent throughout the season,” explains Dr Ray.

Soil moisture, texture and structure can also have an effect on the pathogen’s development.

“Dry, healthy soils with good porosity are most at risk of infection, as the pathogen spreads faster under these conditions,” she adds.

A project run by the University of Nottingham and agrochemical firm Syngenta has investigated in-field effects of the pathogen, while also examining potential oilseed rape genetics and new seed treatments that would mitigate crop yield losses.

Visit our Know How centre for practical farming advice

“We want to understand how the pathogen affects the host, while determining the effect of different soils and seed rates on disease development and seed treatment,” says Dr Ray.

The agrochemical group’s technical support manager, Michael Tait, says soil-borne diseases are more challenging to research than foliar pathogens, but despite this, a clear link between wheat and  oilseed rape crops and soil-borne disease has been found.

A further issue identified by Mr Tait is that rapeseed varieties are available on the market for relatively short time periods, which makes integrating crop protection to a range of cultivars difficult.

In addition, cabbage stem flea beetle damage is found to be greater in crops grown in infected soils, as they show reduced emergence and vigour, allowing time for flea beetles to take their toll. The risk from both the pathogen and flea beetles is increased under dry conditions.

With limited cultural control and no registered seed treatments currently available, AHDB resource management scientist Amanda Bennett explains how a strategy based on integrated control methods will be most effective at controlling the disease.

“It’s important to extend and diversify the rotation to include non-host crops, while being particularly careful with brassica cover crops such as mustard, which can act as potential hosts,” says Mrs Bennett.

Rapeseed should not be grown more than once in every four years. Ploughing or deep tillage to 8-10 cm should be used once within the rotation to disturb hyphal networks and reduce inoculum.

“Cultivation practices must be balanced within the system, as min-till oilseed rape has greater establishment rates,” she says.

Although there are no oilseed rape varieties that carry resistance to the pathogen, selecting varieties with high seed viability and vigour will reduce the risk of the disease.

“There is no soil test available to identify the R solani pathogen, but raising awareness of the disease, allowing farmers to address potential problems and think ahead is essential,” she says.

Seed rates can also be increased to reduce the effects of the pathogen, especially for later sowings in higher-risk situations.

Syngenta is currently developing a seed treatment to combat the pathogenic fungus Rhizoctonia solani in oilseed rape, which is expected to reach the UK market by 2021.

The group’s seed care technical expert, Brigitte Slaats, explains how a three-way mix of sedaxane, fludioxonil and metalaxyl-M could target a range of soil-borne diseases.

“The three modes of action provide control of damping-off diseases and downy mildew, helping the crop to reach its genetic potential while building more resilient plants,” she explains.

Sedaxane gives good control of the R solani pathogen by enhancing vigour and crop establishment. This SDHI fungicide is already used as an autumn cereal seed dressing and is expected to cost £9-£10/ha for oilseed rape.

The seed treatment was tested on the four oilseed rape varieties that were infected with the pathogen, and it increased development uniformity under high disease pressure over a range of seed rates.

The biostimulant Epivio was found to have negative impacts on yield, establishment and seed treatment in infected soils, as the compound increases soil pathogen concentrations.

Inplant activation of rootspecific expression of a cytotoxic gene disrupts the development of the rootknot nematode, Meloidogyne javanica

The BSPP Newsletter for autumn is out now! https://www.bspp.org.uk/bsppnews/

This image is of Clubroot on Oilseed rape, Germany, 2016 and was taken by Geoffrey Dixon - read his biopic in the newsletter to find out about his explorations in plant pathology. #Plantpathology #news

Endocytosis plays a key role during infection by plant-pathogenic fungi.

But its regulatory mechanisms are still largely unknown...

Find out more about how endocytic protein Pal1 regulates appressorium formation in this study from @MPPjournal: http://ow.ly/AFIw50GtZfz