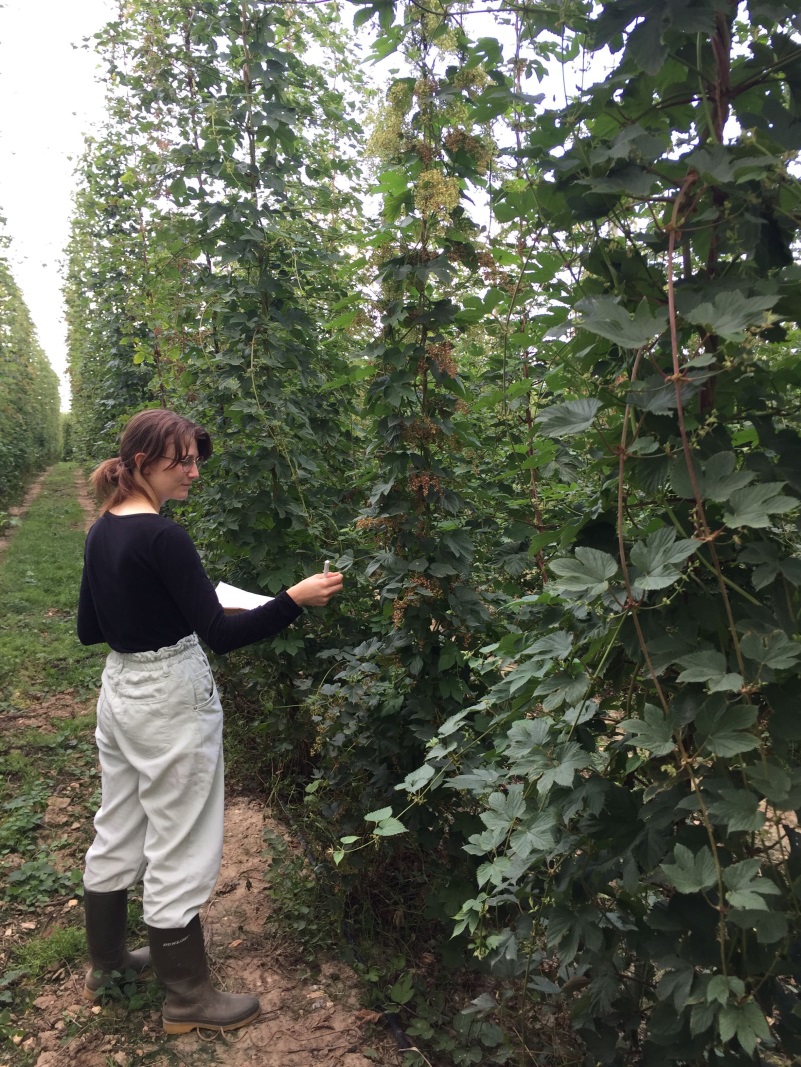 Written by Carla Hazel Finn. This is the report from a BSPP Undergraduate Summer Vacation Bursary. Click here to read more/apply for one yourself.

Verticillium wilt (VW) is a soil-borne progressive disease caused by the root invading fungal pathogen Verticillium nonalfalfae. Use of disease-resistant hop cultivars has selected for highly virulent races of V. nonalfalfae, including the current most lethal form PV3 presenting an issue for UK hop growers especially. The methods to tackle this disease involve applying extreme phytosanitary measures, and also use of cultivars that are resistant to the progressively more virulent forms of the disease. Hence, this detrimental pathogen continues to challenge efforts to grow hops to a profitable standard in the UK. To shorten the process of resistance breeding, genome-assisted selection is an economically viable solution to aid the hop breeding process. I worked for 10 weeks at NIAB EMR, preparing for and carrying out wilt pathogenicity assays under the supervision of PhD student Klara Hajdu. This information will ultimately provide the phenotypic information for the subsequent VW resistance quantitative-trait loci (QTL) mapping.

This work builds upon previous research which used Sanger sequencing to identify and confirm V. nonalfalfae isolates isolated from hop farms in the UK. As part of this work, an isolate with confirmed PV3 race type was selected for consequent use in the large-scale pathogenicity assays undertaken in this project.

The experiment used plant material propagated for 182 genotypes, generated from a bi-parental cross using wilt-resistant and wilt-susceptible parents; six clonally propagated plants were artificially infected with V. nonalfalfae for each genotype. This amounted to over 1,000 plants which all required trimming, caning, and general maintenance to ensure good health before the inoculation. Once in good health, the plants were placed in randomised blocks across a class 2 licensed growing compartment.

The inoculation media containing V. nonalfalfae was grown in General Fungal Media. When a sufficient conidia count was confirmed with a haemocytometer, the wilt pathogenicity assays could proceed. This involved the uprooting of and shaking soil from the roots, artificial inoculation via root-soaking in inoculum, and repotting. The plants are currently awaiting phenotypic monitoring for disease symptoms using a 1-5 scale, from which a disease severity index (DSI) will be calculated for each individual plant. This data will then be used to give an average disease severity of each genotype, which can be used for QTL mapping.

Validating pathogen presence in the plants involves re-isolating V. nonalfalfae from the roots. I was able to perform this using priorly-prepared trial tests, which gave promising results. This also requires the making of over 1,000 agar plates to allow screening for each respective plant in the experiment, which I produced.

Throughout the project duration, I learned valuable insight into experimental design and a multitude of new lab skills and techniques. I have developed a better understanding of the paramount research conducted at EMR and have better appreciation for agricultural sciences. My time here has been usefully varied, including sexing adult hop plants (pictured) and collecting leaf material from all experimental genotypes for DNA extractions and subsequent genotyping. Perhaps most of all, my time here has irrevocably set me on the path of research, for which I am extremely grateful for.

I thoroughly enjoyed my time working with the team at EMR and hope to work with them again in the future. I’d like to thank the enthusiastic team there and extend this thanks to BSPP for the funding and hence opportunity.