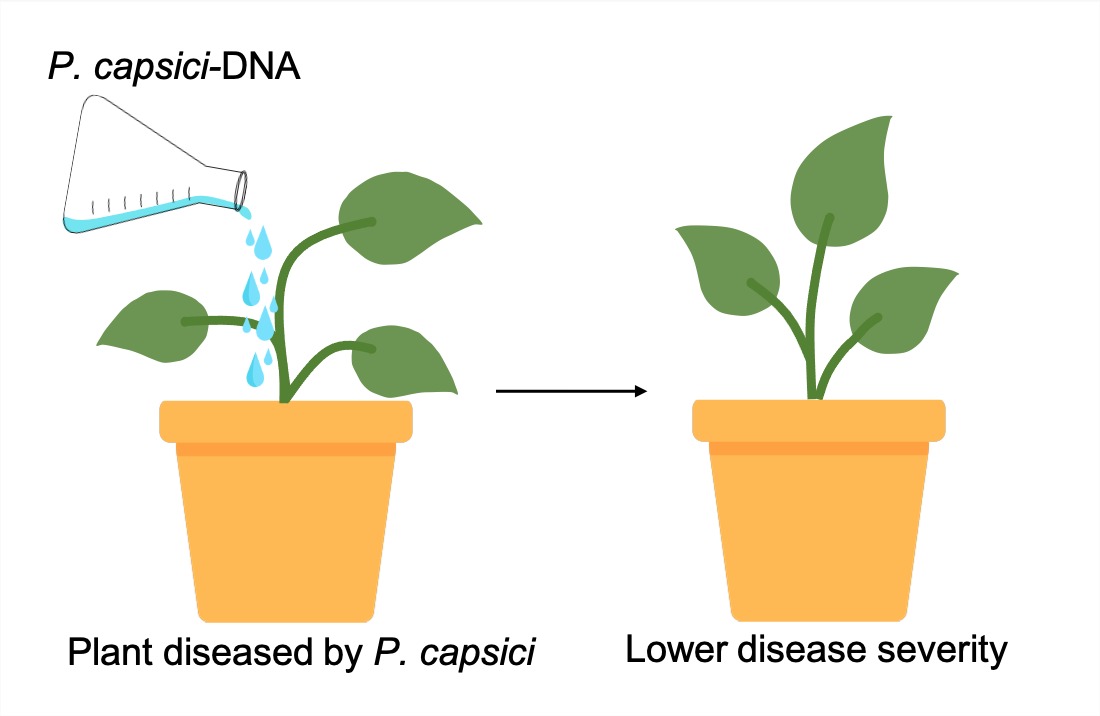 Phytophthora capsici is a highly destructive pathogenic oomycete of crops. It is found worldwide and contributes to a high percentage of food losses. It causes disease on chilli pepper, tomato, cucurbits, eggplant and cocoa, among other crops. Fungicides are the traditional strategy to control this pathogen, but other strategies such as biological control, resistant cultivars, and crop management have also been used to counteract this pathogen. However, these strategies have failed to efficiently prevent P. capsici disease, so scientists are looking for new technologies to control this pathogen.

Phytophthora capsici is a relevant plant pathogen that can perceive its own damage by recognizing its genetic material (DNA), which could be referred to as “self-DNA”, that comes to the extracellular space when cells are damaged.

Interestingly, a group of scientists observed that the germination of P. capsici zoospores could be delayed by the application of self-DNA, possibly because the pathogen recognizes it as “severe damage”, so it “decides” not to develop.

This phenomenon could be explained by understanding that self-DNA behaves as a Damage-associated molecular pattern (DAMP), that is, a molecule that comes from the same organism and indicates that damage is occurring. In other words, DAMPs are molecules that are released when damage occurs and could be recognized by neighboring cells. Other molecules classified as DAMPs are ATP (adenosine triphosphate), cell wall fragments, and peptides, all of them secreted to the extracellular space when damage has occurred.

As reported by the scientists, the pathogen zoospores recognize self-DNA as a DAMP, and this signaling causes a delay in their germination. More studies are needed to figure out the whole molecular perception of this phenomenon.

Furthermore, the scientists observed that by applying a solution of P. capsici-DNA to the neck of diseased plants, these also respond by showing an improvement in their symptoms. Compared to very diseased plants, the plants treated with a low concentrations of P. capsici-DNA showed only slight stunting and very small lesions on stems. In addition, treated plants also produced secondary metabolites, such as flavonoids and phenolic compounds, which is indicative of plant defense response activation.

This has given rise to thinking about new strategies friendlier to the environment and other forms of life, which use molecules such as DNA from pathogens against themselves for agricultural disease treatment. Now is the time to think and act differently.