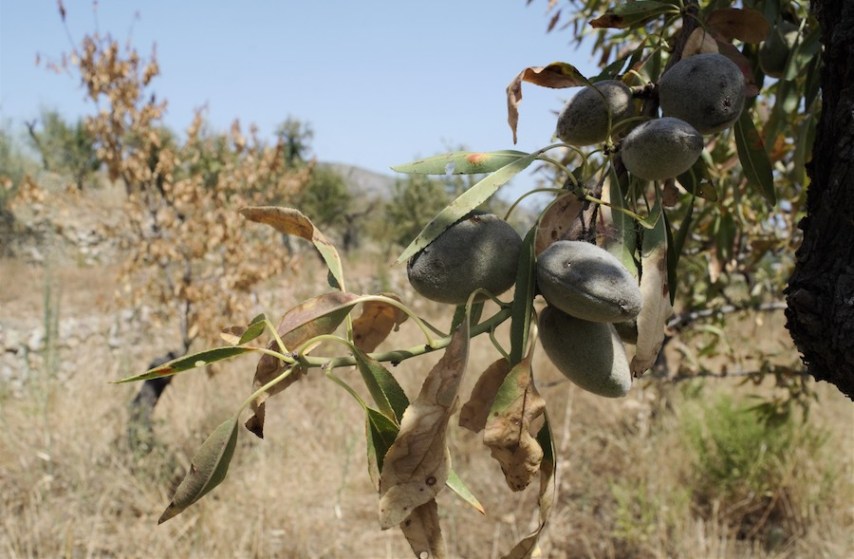 The rugged terrain of Alicante province is the tragic stage for a chain of events similar to what’s happening in southern Italy’s Puglia region, where tens of thousands of olive trees are dying from an infection by the Xylella fastidiosa bacterium. There is no cure for the disease, which is known in the United States as Pierce’s disease.

Almond trees mysteriously started to show signs of sickness several years ago and in 2017 scientists declared they had identified the cause as Xylella fastidiosa.

Since then, about 521 square miles in Alicante have been designated as affected. To contain the outbreak, the European Union is that demanding that infected trees and other trees within a 320-foot radius be cut down. So far, about 1,300 sick almond trees and thousands of surrounding trees have been cut down.

Spain is the world’s second-biggest almond producer, after the United States. Alicante’s big fat almonds are highly valued as nuts to eat and are used in a variety of dishes. They also end up in Spain’s Christmas nougat confection known as turrón and are made into a sweet milk.

On a recent summer morning, Elias Andres, a 42-year-old almond farmer and president of a farmers’ cooperative, walked over a terraced field where he had been growing almonds until all the trees were cut down this year due to Xylella.

“You can see the empty field, and before there were 300 almond trees — adults, maybe 20, 30 years old, in maximum production — and now there’s nothing here,” he said. Next to him was another almond farmer, Faustino Mestre.

Alcalalí is known for its almonds, and in late winter, when almond trees are covered in gorgeous blossoms, the town fills up with nature lovers eager to soak up the resplendent show.

Even though Andres’ trees appeared healthy, some were diagnosed as sick with Xylella. Tree owners who object to felling of trees face hefty fines.

“They send you a letter telling you they are going to come and cut your trees,” he said, speaking in English. “At the moment, there’s nothing we can do.”

Mestre too faced losing lots of his trees after he got a letter telling him he had a sick tree. “We didn’t know it was a sick tree,” he said.

The two farmers paced over the empty field as a cacophony of high-pitched insects pierced the summer air on a hillside in the Valle de Pop, a picturesque broad valley with vineyards, olive trees and lots of almond orchards.

Xylella is considered one of Europe’s biggest agricultural threats, with the potential of widespread devastation. The pathogen this year was found in two decorative olive trees in mainland France and it previously had been found on Spain’s Balearic islands and on Corsica. It’s also been found in Italy’s Tuscany region and in Portugal.

Its spread in Europe is being closely monitored and tracked. It is believed that Xylella entered Europe through importation of exotic plants. The bacterium is spread by sap-feeding bugs. It restricts a plant’s ability to absorb water, causing leaves to turn brown and the tree to die.

As in Italy, there is a lot of skepticism in Spain about whether sick trees are actually being killed by Xylella and whether the drastic measures to contain it, as dictated by the EU, are effective and really needed. In Italy, scientists and government officials are dismayed and angry at the refusal of many farmers and environmental activists to believe Xylella is the cause of the disease.

One of those expressing doubts was Juan Cuart, a 74-year-old pensioner who sat with other elderly men outside a community center in the main square of Xaló, a town neighboring Alcalalí.

He related how one man he knew was told his trees were sick with Xylella. But when he had his trees analyzed by a specialist, she determined that Xylella was not the cause of the sickness, he said.

“But they didn’t listen,” Cuart said. “Regardless of what you say, even if you object, they pull out the trees. You end up with nothing. No money, no almonds, with nothing.”

He sat under a banner over the community center that stated: “Xaló Says No To the Removal of Healthy Almonds.”

Cuart said a local butcher had 3,000 trees cut down even though the trees were well looked after, with regular pruning and fertilizing. “They came in and tore out all the trees,” he said. “It’s a tragedy.”

Despite his misgivings, he said the disease was a catastrophe. “It’s advancing, spreading. This is what is frightening. They say it cannot be stopped,” he said. “You can lose a whole life’s work when they cut down all the trees, even the healthy ones around you.”

Back in the fields, Andres wondered whether it was too late to stop the bacterium.

“This bacteria probably has been here for many years now because it is spread throughout the Alicante province,” he said. “So I don’t think it’s a solution to cut the trees because the bacteria is already in the place.”

Mestre said some experts believe Xylella has been present in the region for 30 years. “Thirty years ago cutting down infected trees would have been effective; now it’s too late.”

Making matters worse, farmers are forbidden to replace their almond trees for five years, and are told not to plant grapes and olives because they too could become infected with Xylella, the farmers said.

“I think it is almost impossible to stop the bacteria now,” Andres said. “We have to live with the bacteria, and the way you do it is to find trees that are resistant to the bacteria.”

That’s precisely what scientists are seeking to do. They are trying to identify varieties of plants immune to Xylella. In Puglia, scientists have found resistant olive tree varieties and the same work is being done for almonds in Spain.

“I lost all the money I invested in the last three years, and I’m not going to receive anything,” he said. A farmer gets a small amount in compensation for lost trees.

In a nearby orchard, Mestre pointed out a tree that looked potentially infected with Xylella. All its leaves were brown and dead — a telltale sign of Xylella restricting the flow of water and nutrients.

Dangling from a nearby olive tree was a notice someone had placed warning that pesticides had been sprayed there.

Mestre was in favor of relying on more pesticide use to kill Xylella-carrying bugs — the vectors.

“If they would attack the vector more, it would stop the spread,” he said.

Andres disagreed. “It’s not the vector’s fault,” he said. “Some people think it’s better to eradicate the vector, but that is almost impossible.”

He criticized a company hired to lead efforts in Alicante to stop Xylella’s spread. He said the company was spraying pesticides haphazardly.

“They spray on windy days, any day,” he said.

Both farmers said Xylella was making the precarious livelihoods of farmers in Alicante even more uncertain.

“It is quite hard to be an agriculturalist in Spain right now,” Andres said. “There are a lot of abandoned fields.”

Besides Xylella, he said local farmers have been hurt by competition that has led to a dramatic drop in price for oranges, a major crop in this part of Spain.

(Courthouse News reporter Cain Burdeau is based in the European Union.)