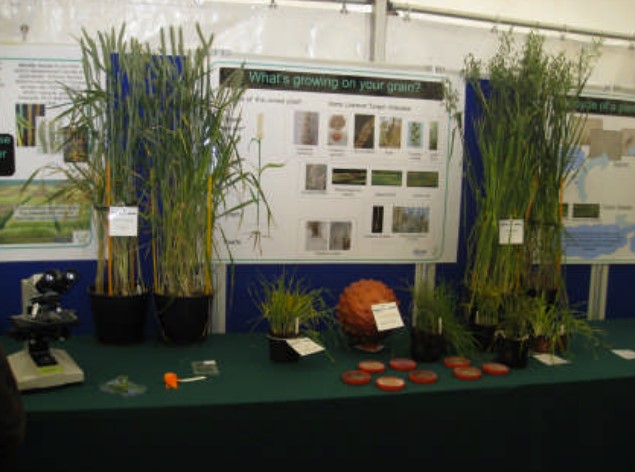 Written by Anna Gordon from NIAB. This was funded by the BSPP Plant Pathology Promotion Fund, click here to read more about this funding opportunity.

Hundreds of people attended the “Rooted in History” event in Cambridge in March 2009, organised as a collaboration by Plant Sciences at the University of Cambridge, the Botanical Garden and the National Institute of Agricultural Botany as part of the Cambridge National Science Week event . The BSPP – funded NIAB contribution to the day was focused on “Cereal Diseases – What’s Growing on Your Grain?” with an interactive microscopic view of the major fungal diseases of cereals. 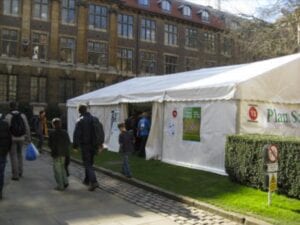 Healthy cereal plants including Wheat, Barley, Oats and Triticale were on show to illustrate the diversity of some of the grain eaten by people in the UK and to show just how impressive and majestic these plants in ear really are. Contrasted with these were sickly individuals infected by Take-all, Septoria, Powdery Mildew, Yellow rust, Brown rust, Rhynchosporium, Net blotch, and Bunt. On show down the dissection microscope were Septoria lesions on leaves and down the high powered microscopes were a range of mounted spores including Bunt, Septoria nodorum and Pyrenophora teres. Hanging above our heads for comparison were some papier mache versions. 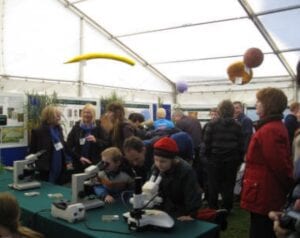 The backdrop to the display was a series of five posters looking at the major diseases of cereals, the life cycle of a plant pathogenic fungus, why diseases are bad, how to control diseases and finally a Timeline since Darwin, highlighting advances in science and agriculture and the major disease outbreaks that have occurred in17 parallel. The helpers throughout the day took people on a journey into their own favourite disease, the phenotypes they have on plants and the spores they produce, ending up with why diseases are bad and what effects they can have on our health. 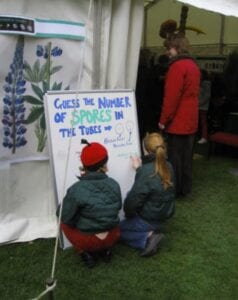 We had a “Guess the number of spores in a tube” competition on a large whiteboard for both Yellow and Brown rust, with winners of all ages being chosen every half hour to those with the closest guess. Prizes were supplied by the BSPP, and the joint most popular prizes were the Eco shopper bag and baseball hat, with the mouse mat coming a close second. Interestingly the intervention of embarrassed parents to s top too “outlandish” guesses sometimes did a disservice to their kids as the true spore numbers were outstanding at 80 billion brown rust spores and 240 billion yellow rust spores. The Plant Doctor Carrot Bugs were a real hit – every time they were scattered onto the tables they were quickly nabbed by eager putative plant pathologists.