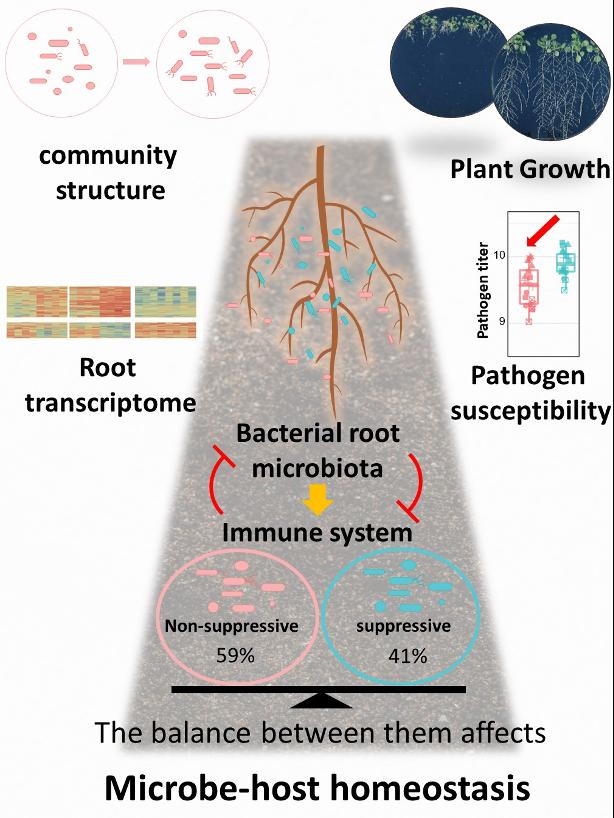 Plants have evolved an innate immune system to protect themselves against pathogens, including the recognition of microbe-derived MAMPs by pattern recognition receptors (PRRs) that reside on the surface of plant cells. Recognition of MAMPs by PRRs leads to MAMP-triggered immunity (MTI), which results in the restriction of pathogen proliferation. However, left unchecked, chronic MTI can also lead to plant growth inhibition, a phenomenon known as growth-defence trade-off. Pathogens have evolved diverse mechanisms to supress MTI, a property that has, surprisingly, also been detected in a subset of non-harmful commensal bacteria of the root microbiota. These bacteria have been coined ‘immune-suppressive’ microbes, in contrast to ‘non-suppressive’ commensal microbes that cannot suppress MTI. Now, it has emerged that the presence of immune-suppressive microbes in the plant microbiota can suppress part of the host immune response, while favoring the colonization of opportunistic pathogens – infectious microorganisms that are normally harmless to their host but can cause disease when favorable conditions arise.

To first assess the ability of plant root commensal bacteria to interfere with defence-associated root growth inhibition (RGI), first-author Ka-Wai Ma and colleagues made use of a systematic collection of bacterial strains isolated from the roots of Arabidopsis thaliana. The authors demonstrated that after three weeks of co-culturing the bacteria with Arabidopsis thaliana in the presence of flg22 – one of the most studied microbe-derived molecules known to induce plant immune responses – 41% of the bacterial strains in the collection were able to interfere with RGI. This ability did not seem to be specific to a certain type of bacterium in the plant microbiome, as it was detected across the whole spectrum of plant microbiota associated bacteria, including Actinobacteria, Proteobacteria, Bacteroidetes and Firmicutes.

The authors’ findings strongly suggest that in order to achieve a healthy balance between plant growth and plant defence, and therefore maintain microbe-plant homeostasis, the plant root microbiota needs to contain both immune-suppressive and non-suppressive bacterial strains in balanced proportions. Having too many or not enough of either type of bacteria in the plant microbiota could be detrimental to plants, as it could result in increased disease susceptibility and poor plant growth. According to first author Ka-Wai Ma: “Although plants are known to have an intimate association with their microbiota, surprisingly, we still do not have a full understanding of their influence on the plant immune system. This study serves as a good example of how a balanced microbiota is important to modulate plant traits of interest. From a translational perspective, these findings have potential if one can manipulate the microbiota in such a way to tip the balance for the benefit of the plants.”