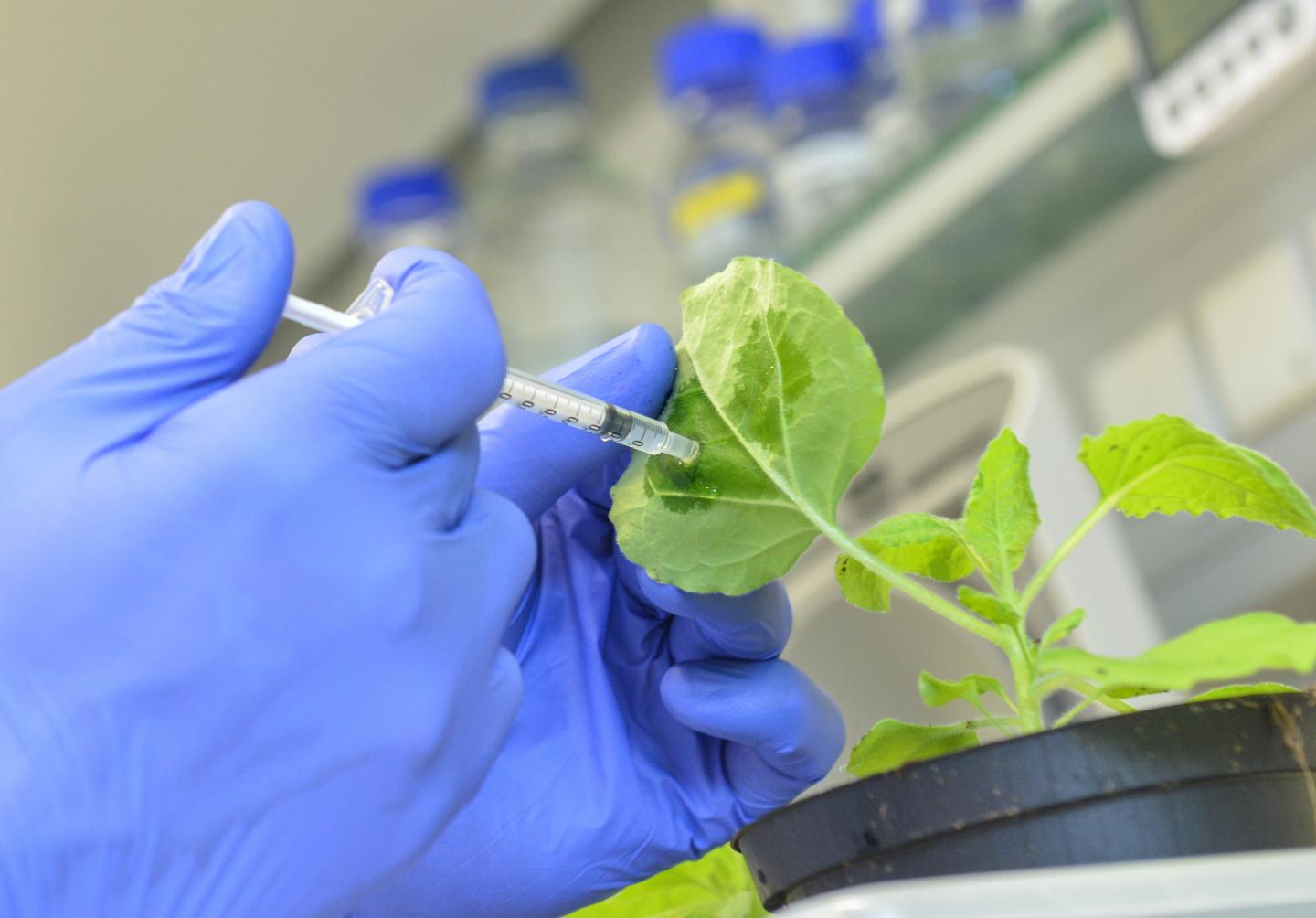 Simple, fast and flexible: It could become significantly easier to vaccinate plants against viruses in future. Scientists at Martin Luther University Halle-Wittenberg (MLU), the Leibniz Institute of Plant Biochemistry (IPB) and the National Research Council in Italy (CNR) have developed a new method for this purpose. It enables the rapid identification and production of precisely tailored substances that combat different pathogens. The researchers discuss their work in the next edition of the journal “Nucleic Acids Research“.

The new method is based on a molecular defence program of plants that is triggered, for example, by viral infections. During a virus attack, the plant’s cells serve as a host to multiply the virus, which results in the creation of viral ribonucleic acid molecules (RNAs). Plants can detect and cut up these molecules using special enzyme scissors. This process produces “small interfering RNAs” (siRNAs) which spread throughout the plant and may initiate a second stage of defence for the plant. Here, the siRNA molecules attach themselves to so-called Argonaute protein complexes and lead these to the virus RNAs, which then, in the best-case scenario can be dismantled and broken down into harmless compounds. “By implementing this two-stage process, the plant is trying to protect itself from the virus both at the site of the infection and throughout its structure”, says Professor Sven-Erik Behrens from MLU’s Institute of Biochemistry and Biotechnology.

The process is not particularly efficient, however, as the biochemist explains: “When a viral infection occurs, lots of different siRNA molecules are produced, but very few of them have a protective effect. The majority simply saturate the Argonaute complexes, rendering them inactive.” Behrens’ team has discovered a novel way to identify the few effective antiviral siRNA molecules for different viruses and harness them as plant vaccines. The scientists have developed a screening process based on plant cell extracts, which is being used instead of lengthy, complex breeding efforts. To qualify as potential vaccines, the siRNA molecules must have two key properties: On the one hand, they have to bind strongly to the Argonaute complexes. On the other hand, they have to lead these proteins to sites of the viral RNAs that are accessible for Argonaute-mediated degradation.

The team of scientists have already been able to prove the effectiveness of their new method in the laboratory. To achieve this, two groups of the tobacco plant N. benthamiana were infected with a model virus that attacks tomatoes and tobacco. Before being infected, one group was vaccinated with highly efficient siRNA molecules that the researchers had identified using the new method. The other group didn’t receive any treatment. The effects were striking: After six weeks, 90 per cent of the vaccinated plants did not show any signs of infection, but all the untreated plants had been killed by the virus.

The MLU research team’s method follows the modular principle. “If the pathogen changes or the plant needs to be protected against another virus, the established screening process enables suitable RNA molecules to fight the respective pathogen to be identified very quickly. This means we can be very flexible when it comes to combatting new pests”, Behrens concludes. A patent application has been filed for the method.

The researchers hope to continue exploring and improving their method in future. It is, for example, still unclear how long a vaccination will last in different species and whether drug depots can be created on plants. Further studies will clarify how vaccines can be produced in larger quantities and how they can be applied to or absorbed by plants. According to Behrens, a spray that can be applied in greenhouses is conceivable: “Tomato growers have to contend with whiteflies, for example, and these can transfer viruses from one plant to another very quickly.” Until now, pesticides have been used to kill off the insects. The new MLU development could prove to be an alternative that’s much gentler both to the insects and to the environment.

The research was funded by the Deutsche Forschungsgemeinschaft (DFG, German Research Foundation) as part of the Collaborative Research Centre 648 and by the Research Priority Programme of the State of Saxony-Anhalt.

The BSPP Newsletter for autumn is out now! https://www.bspp.org.uk/bsppnews/

This image is of Clubroot on Oilseed rape, Germany, 2016 and was taken by Geoffrey Dixon - read his biopic in the newsletter to find out about his explorations in plant pathology. #Plantpathology #news

Endocytosis plays a key role during infection by plant-pathogenic fungi.

But its regulatory mechanisms are still largely unknown...

Find out more about how endocytic protein Pal1 regulates appressorium formation in this study from @MPPjournal: http://ow.ly/AFIw50GtZfz