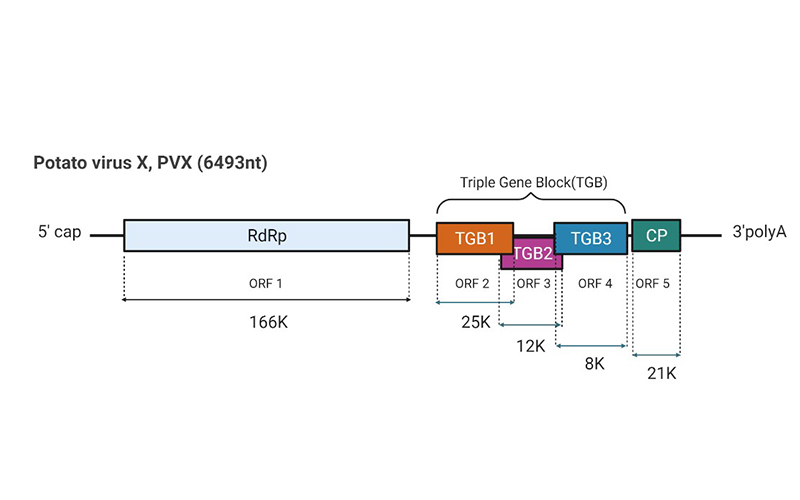 Potato Virus X (PVX) is the oldest known and is a common virus affecting potato production. Although PVX affects a wide range of crops including tomato, tobacco etc., it is more devastating to potato than other crops. It is globally distributed and is transmitted through physical contact with contaminated farm equipment and infected crop roots. PVX infection is intensified when other viruses, like PVY and PVS, are coinfecting partners causing severe necrosis and increased virus titre.

The PVX genome is a single stranded, positive sense RNA and is about 6400 bp in length. PVX belongs to the Potexvirus genus in the Alphaflexiviridae family. Virions are flexuous filaments with length of 460 to 480 nm, diameter of 13 nm and a helical pitch of 3.4 nm. The genome has 5’ methylguanosine cap and 3’ poly(A) tail. The five encoded open reading frames produce the RNA dependent RNA polymerase (RdRp); the triple gene block (TGB) movement proteins named TGB1, TGB2, and TGB3; and a single coat protein (CP). The RdRp is translated from genomic RNA, while three subgenomic RNAs are primarily responsible for expression of the TGB proteins and CP. When PVX enters a plant cell, virion disassembly is initiated by phosphorylation of an exposed N-terminal region of the CP subunits, at the end of a virion particle. X-bodies are viral replication centers, located in the cytoplasm and often near the nucleus. Cell to cell movement involves complex interactions among the TGB proteins. TGB2, along with TGB3, colocalize in the ER and recruit TGB1 and viral RNA, building the intercellular transport complexes. The TGB2 generates vesicles to protect the viral RNA from detection in ER membranes.

In the early 1990’s, genetic resistant and susceptibility of potato plants were probed using different PVX strains from Europe and the Americas. These fundamental studies were important for cloning the Rx resistant gene. An unconventional form of innate immunity to PVX is provided by JAX1(jacalin-type Lectin, discovered in Arabidopsis). JAX1 binds with RdRp and inhibit viral replication.

Many countries have national potato certification programs that use advanced diagnostic technology for screening seed potatoes for viruses. Routine diagnostic detection of PVX is carried out through multiplex RT-PCR, hybridization, and microarray technologies. The best method for management of PVX virus is using resistant varieties and through planting of certified seeds. Micropropagation and stem cutting to generate virus free stock has been developed.

TITLE IMAGE: Diagram representing the genome structure of Potato Virus X, provided by Binita Adhikari. All images used with permission of the author.