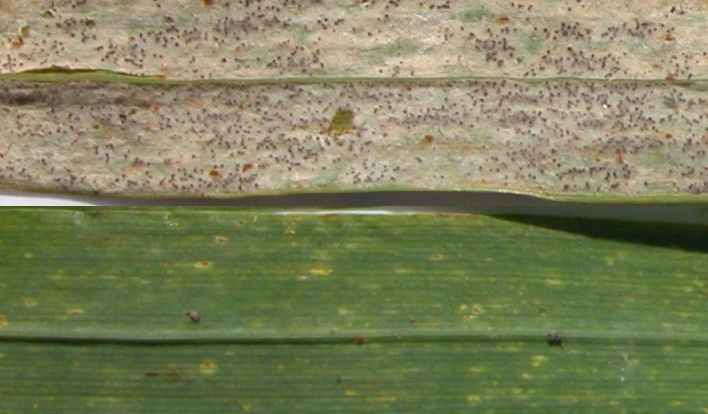 Gene editing using CRISPR-Cas9 has entered the news with approval of the technology for use in the UK by the House of Lords on 14th March 2022. But what is the background to using such technologies and can it really be useful in plant pathology? There are now two good examples where gene editing has been used to make transgenic disease resistant plants, at least in the laboratory. Both of these are based on well-established knowledge of particular recessive disease resistance genes. One confers resistance against powdery mildew in cereals, the other against Potyviruses in various dicots.

First a perspective: mutation usually has an effect. A gene gets changed and this is usually bad for its owner since the reason the gene is there in the first place is because it confers an advantage to the organism. In plant pathology, mutations can affect genes with roles in interfering or encouraging an interaction. These include genes in the host responsible for resistance and susceptibility to a particular pathogen. Almost all of these host genes affect interactions with biotrophic pathogens, which are usually obligate parasites. These genetic relationships have been the main focus for molecular plant pathologists for over 30 years, and these molecular genetic studies have taught us a lot about the interplay between host and pathogen, and the ways in which pathogens can manipulate their hosts. A vanishingly small proportion of the resistance genes identified are recessive (see Collinge, 2020c).

A mainstay of molecular genetic studies of plant-pathogen interactions is the ability to mutate specific genes – a strategy now termed “reverse genetics”. This has been routine for many bacterial and fungal pathogens, but for by no means all. In these systems, it is possible to “knock-out” the function of a chosen gene. This is traditionally achieved by genetic recombination, typically by replacing the targeted gene with a selective marker encoding e.g. antibiotic resistance. On the other hand, it has not been possible to manipulate specific plant genes in a similar way. The best bet for plants was RNAi interference or knock-down, where the expression of a gene can be de facto reduced by post-transcriptional reduction in the amount of translatable RNA (see Collinge, 2020b)

Gene editing has changed this. It is now possible to target quite small DNA sequences within a gene to “knock-out” function. There are two main gene editing techniques: TALEN and CRISPR. Transcription activator-like effector – TALEN – was the first gene editing technology to be developed. TALEN was first identified as an effector of plant pathogenic Xanthomonas bacteria, a promoter-binding protein (TAL Effector). This was developed as a tool for editing genes by fusing to an endonuclease. This technology has been superseded by CRISPR (Clustered Regularly Interspaced Short Palindromic Repeats)-Cas9 technology which is derived from bacterial defences against bacteriophage and is somewhat easier to use.

The first study concerns wheat, conferring resistance against powdery mildew by targeting the homeologous wheat mlo genes. In this landmark study, knowledge – and many decades of successful implementation – of recessive host resistance in barley, against the powdery mildew fungus Blumeria graminis in diploid spring barley, was applied to hexaploid wheat. Caixia Gao and Jin-Long Qiu’s group in Beijing actually used both approaches to mutate the three homeologous wheat mlo genes in the A, B and D genomes and then combine into single plants. They have subsequently developed plants which do not exhibit a yield penalty. As mentioned above, like all organisms, plants have specific genes because they serve a purpose and have been selected for over eons. Loss of these genes by mutation may prove disadvantageous. Indeed, the mlo barley plants, while exhibiting excellent resistance to the powdery mildew fungus, are susceptible to various necrotrophic pathogens. Time will tell whether mlo wheat is susceptible to, for example the emerging disease wheat blast. Cereals are not the only plants where mlo mutants occur (see Collinge, 2018). Natural mutants have also been seen in pea and tomato, and have been generated in tomato by CRISPR-Cas9  and in grapevine by RNAi.

The eIF4E mutations for potyvirus resistance

The second example concerns recessive mutations in  eIF4E genes, conferring resistance to potyviruses in tomato and pepper. In three independent studies, a series of host mutations in eIF4E were developed using CRISPR-Cas9 that resulted in expansion of the resistance to several virus species (Bastet et al., 2019, Yoon et al., 2020, Kuroiwa et al., 2022). It is unlikely that this could have been achieved using conventional mutagenesis. Another aspect of these studies is that, though the plants go through a transgenic event during development, the introduced genes are lost by genetic segregation. The final product is indistinguishable from a natural mutant. This is an argument for not treating the technology as a GMO, and regulatory authorities round the world are now taking this into account.

A further advantage of gene editing is that the technology allows the design of variants of genes which can improve the function of the product rather than just inactivating it. Indeed, that is the essence of the eIF4E studies described above. This exciting aspect of the technology is limited only by the imagination of the user!