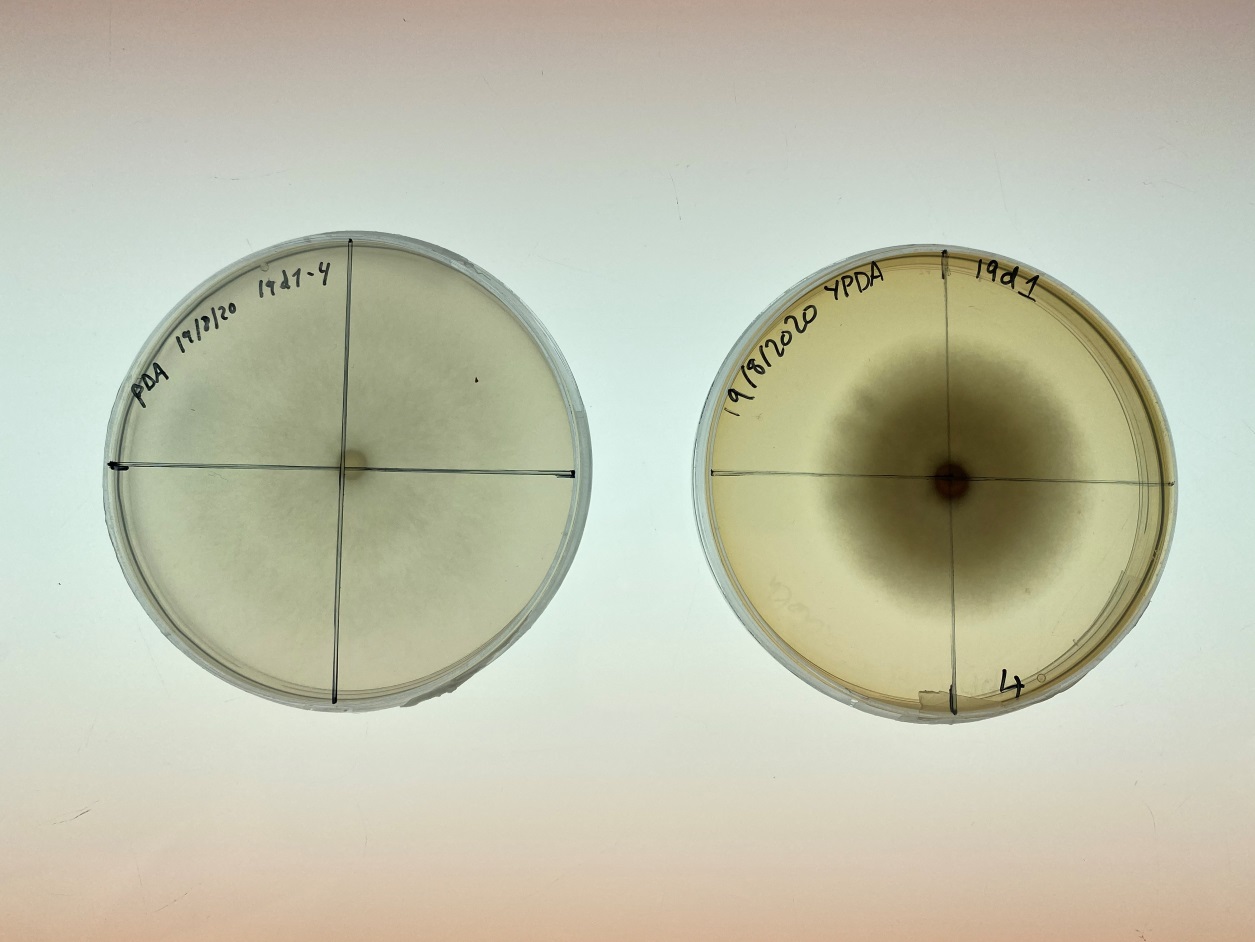 Written by Rosie Miller, Eden Project Learning. This is the report from a BSPP Undergraduate Summer Vacation Bursary. Click here to read more/apply for one yourself.

Take-all disease is caused by a necrotrophic soil-borne fungus Gaeumannomyces tritici (Gt) which is known as the most important root disease of Wheat worldwide. Gt causes 60% loss on wheat yield in the UK. This fungus causes stunting, premature ripening resulting in shrivelled grain which can largely affect crop health and yield. Gt can invade through the root cortex and colonise the stele this causes necrosis. This interferes with water and nutrient uptake. Although there has been extensive research an effective and economic control for this disease remains difficult to find. The take-all team at Rothamsted Research is obtaining full genome sequences for four selected reference strains, which are named 4e, 23d, 8d and 19d1. My project was profiling each of the four reference strains in planta and in vitro. I focused on virulence, rate of growth and finding the Minimal Inhibitory Concentration (MIC) for different antibiotics.

Rates of growth was conducted by using each of the isolates and growing them on potato dextrose agar (PDA), yeast potato dextrose (YPDA) and water agar (WA). For each isolate there was four replicates. They grew in the plates for 8 days and I measured every day two radius per plate. Each isolate growing on WA showed no growth throughout this experiment. By the end of the experiment all the isolates displayed a higher rate of growth on PDA than YPDA. 19d1 by the end of the experiment filled the PDA plate but on YPDA grew to an average of 3.1cm.

19d1 which is one of the reference isolate was chosen for testing the MIC of four antibiotics: Carboxin, Hygromycin, Benomyl and Triadimefone. The four different antibiotics which were added into PDA, at different concentrations. The stocks for each antibiotics was, Carboxin stock was 10mg/ml and dissolved in ethanol, Hygromycin was 50mg/ml in water, Benomyl was 2mg/ml in dimethyl sulfoxide and Triadimefone was 50mg/ml also in dimethyl sulfoxide.

Another experiment conducted during my time at Rothamsted was trying to get Gt microconidia to germinate. Gaeumannomyces hyphopodioides (Gh) was also used, this fungus is a non-pathogenic relative of Gt. This was done by placing 2ml of water into each plate for Gt and Gh, the mycelium and spores were then scrapped off. Both sets were then halved and placed through two different types of filters; one was a 5ul syringe filter and the other was miracloth. All the treatments were checked under the microscope for spores, which were present.

The filtered spores and mycelium were then placed into six different treatments these were, water control, potato dextrose broth (PDB), root exudates from seeds growing in petri dishes with water and root exudates from seedlings in vermiculite both were non-filtered and filtered sterilised through 0.2mm filters. After they were placed into an incubator set at 25 degrees, 175 RPM for 24 hours. Each treatment was then placed back under the microscope to check for germinating spores. Gt did not germinate in any of the treatments but Gh did, in all of the treatments. Successfully germinating Gt spores would help storing the fungus and could facilitate doing genetic transformations.

Investigating the virulence levels of the four strains was done by completing a pot test which involved growing sterilised ‘Chinese spring’ wheat seedling with each isolate. Falcon tubes were filled with vermiculite, one seed and 4 plugs of one of the reference isolates. There were 12 falcon tubes per isolate and one set of controls. After growing them for two weeks, the first 10cm of each root was assessed and checked for black lesions. Lesions show where the fungus has infected the plant. After making averages no significant differences were found among strains.

While at Rothamsted a new protocol was being tested for obtaining protoplast from Gt. This involved growing 3 19d1 plugs in PDB for 48 hours inside an incubator. Complete media which is nutrient rich was added to the flasks to encourage growth. The mycelium is then filtered through miracloth by using a vacuum and then washed with sorbitol, which is osmotically stable, this is so the cell can survive after removing cell wall. Then the mycelium was added to a tube containing lysing enzymes and incubated for 2 hours.

With removing the cell walls, this means DNA can then be inputted into the cells. This is called transforming the cells, if this can be done successfully then it could contribute to study gene functions in G. tritici.

My 4 week internship at Rothamsted has improved my lab practices, including sterile techniques, quantitative disease assessments, microscopy and results interpretation. I have learnt a great deal and I am eager to pursue a career in plant pathology after finishing my BSC degree in plant science. I would like to thank Javier Palma-Guerrero and PhD student Tania Chancellor for their teaching, patience and encouragement. I have really enjoyed my time at Rothamsted, and I really appreciate BSPP for the opportunity.