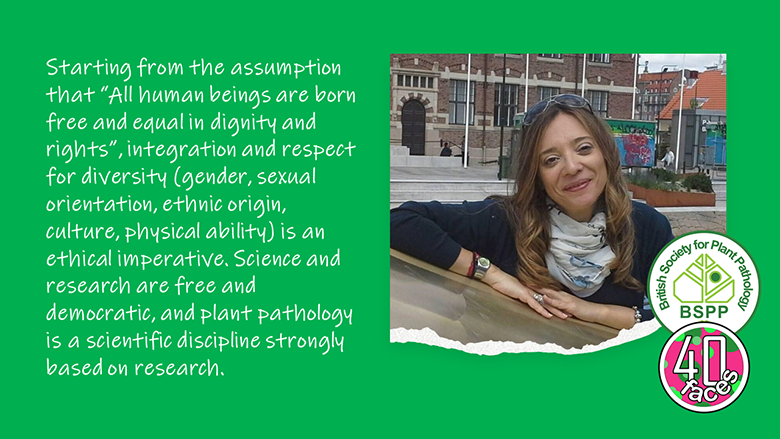 Sabrina Sarrocco is one of our ’40 Faces of Plant Pathology’

Biology, ecology and genomics of biocontrol fungi (Trichoderma spp.), and their application against mycotoxigenic fungi, mostly the causal agents of Fusarium head blight. Secondary metabolism in Trichoderma and in fimicolous fungi as source of compounds of interest for the management of plant diseases. Use of transformation techniques and of genome editing approaches (CRISPR-Cas) to improve performance of beneficial fungi and to study their mechanisms of action. Involved in the selection and development of Trichoderma isolates as active ingredients of new biopesticides to be released on the market.

Ecology and biology of Colletotrichum spp., particularly C. lupini and its interaction with host plant.

My first class in plant pathology was in 2004, when I was only few years older than my students!

The main challenge in the next years is to reduce the gap between developed and developing countries in terms of food safety and security, without losing sight of the need to render agriculture more sustainable. We actually have a plethora of new and exciting tools (from omics approaches to genome editing as well as cutting-edge technological knowledge and the capacity to forecast future scenarios) that could be used to reduce this nutritional gap, mostly by teaching to people living in developing countries how to improve their resilience, how to better use resources available in their environment and how to manage plant pathogens, especially those (mycotoxigenic) affecting staple foods that in many countries represent the only source of nutrition. Educating these populations to adopt better agricultural practices as well as give them eco-friendly approaches to manage these diseases is one of the problems in plant pathology I would like to solve.

Starting from the assumption that “All human beings are born free and equal in dignity and rights”, integration and respect for diversity (gender, sexual orientation, ethnic origin, culture, physical ability) is an ethical imperative. Science and research are free and democratic, and plant pathology is a scientific discipline strongly based on research. All young’s that decided to devote their life to plant pathology (as to other disciplines) should have the same chances to receive an adequate instruction and to have access at the same resources to become good scientists, no matter of their geographic origin or sexual/religious orientation.

An astronaut, to look for new “space” fungi!!!!