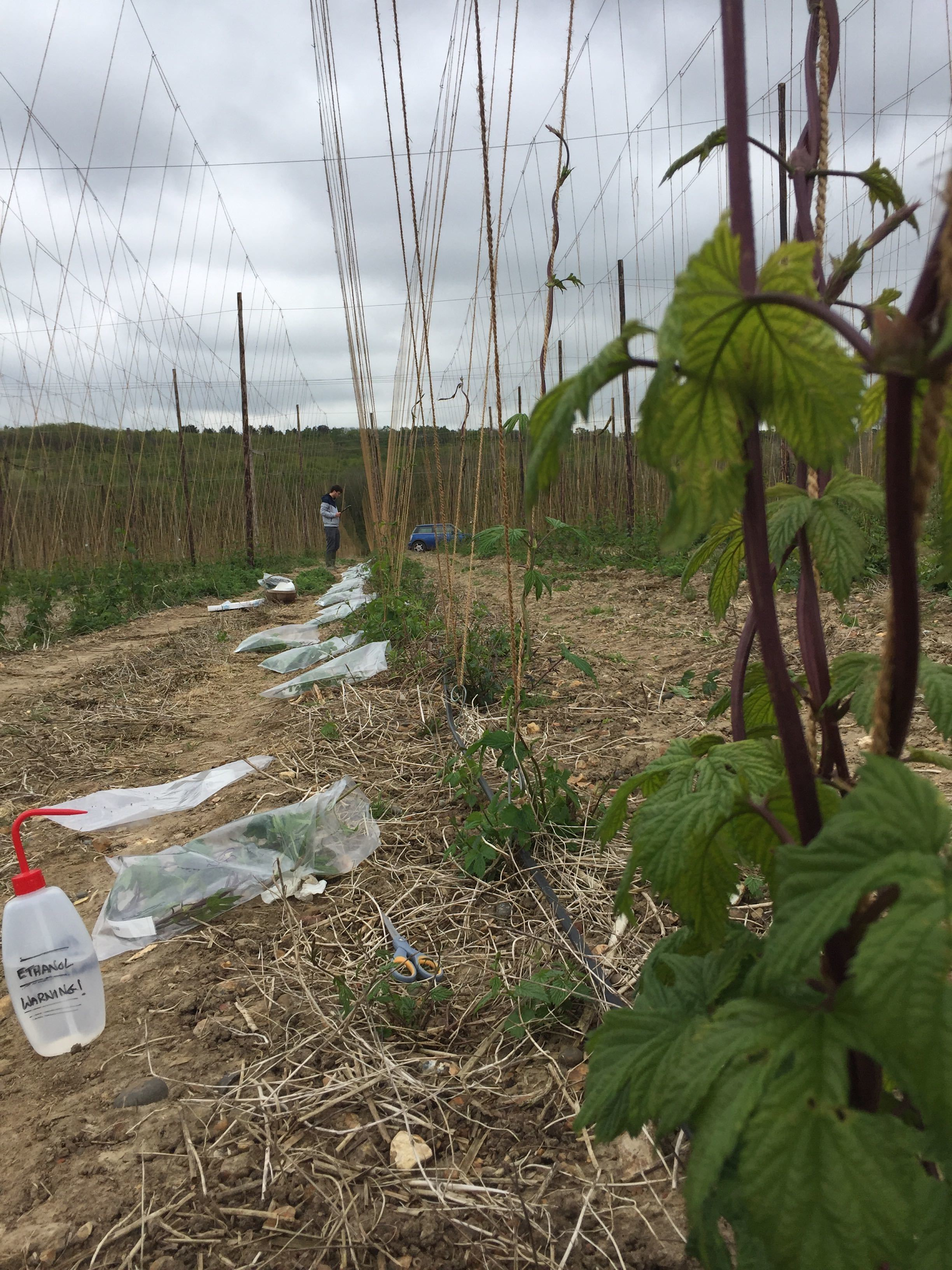 Written by Mr Giuliano Manetti at the The University of Tuscia. This is the report from a BSPP Incoming Fellowship. Click here to read more/apply for one yourself.

Highly virulent isolates of the soil borne fungus Verticillium nonalfalfae have had a significant impact on the UK hop industry. This detrimental plant pathogen has led to the restriction of UK hop plant movement, as this embargo aims to prohibit the spread of virulent isolates within hop material. Reports indicate that the use of Verticillium resistant hop varieties have led to an arms race that has resulted in the evolution of highly virulent races of V. nonalfalfae.

From March to July of 2019 we were happy to host Guiliano Manetti at NIAB EMR under supervision of Dr Andrew Armitage and Dr Helen Cockerton. This was made possible through an incoming fellowship award generously provided by the BSPP. Guiliano has an interest in hop pathogens and contacted us directly after his Masters project, which focused on abiotic stress in hop. This fellowship has been instrumental in kick starting pathogen work on V. nonalfalae. The project had three primary objectives; 1) extraction of high-quality DNA for four highly virulent races of V. nonalfalae, 2) library preparation for Illumina sequencing of Verticillium isolates, 3) development of robust small scale pathogenicity assays. This project centered on defining the pathogenicity of two race types, PV1 isolates that cause lethal wilt on ‘Fuggle’, and PV3 isolates that cause lethal wilt on the tolerant cultivar ‘Wye Target’. The highly virulent race PV3 is found exclusively in UK hop production. Ultimately, this work will allow comparative genomics to identify pathogenicity factors involved in breaking resistance in the cultivar ‘Wye Target’.

Work first began with culturing and characterising the historic Verticillium culture collection at NIAB EMR, containing many samples from hop. Taxonomy of the Verticillium genus has been revised since establishment of the culture collection. Through extracting DNA from over 30 isolates of Verticillium and sanger sequencing of the ITS barcoding region we were able to identify V. dahliae and V. nonalfalfae isolates for further investigation. This included four UK V. nonalfalfae isolates representing race types PV1 (11041; isolated in Staffordshire 1997 and 11055; Kent 1981) and PV3 (11043; Herefordshire, 1997 and 11100; Sussex, 2002).

Guiliano spent time generating plant material for pathology testing alongside the British Hop Association funded PhD student Klara Hajdu. Klara’s work is titled “21st Century Breeding in Hop” and is currently working towards identifying the genetic source of disease resistance to Verticillium nonalfalfae as well as other phenotypic traits. Pathology testing for Verticillium resistance needs to be conducted on perennial material, and therefore material needs to be propagated a year in advance. Plant material was propagated for pathology experiments that will be used to race type multiple isolates of V. nonalflafae in 2020.

Culturing of V. nonalfalfae required extensive optimisation to achieve high quality DNA for whole genome sequencing. The four selected isolates were grown in Modified Czapex Dox solution for 4 days in a rotary shaker at 120 RPM at 25 ºC in the dark. Mycelia was harvested by vacuum filtration, washed with sterile water and freeze dried for 16 hours. Freeze dried mycelia was ground using a pestle and mortar under liquid nitrogen before performing DNA extraction. A Mag-Bind ® Plant DNA kit was used to extract high quality and quantity genomic DNA for the four selected isolates.

Genome sequencing of the two successful PV3 libraries generated data equivalent to approximately 60 times coverage for each genome. Analysis of sequencing data was performed using in-house pipelines on the NIAB EMR high-performance computer cluster. Raw reads were trimmed using fastq-mcf to remove adapters and poor-quality sequence and genome assembly was performed using SPAdes. The assembly for V. nonalfalfae isolate 11043 totalled 33.6 Mb in 654 contigs (> 1 kb), with an N50 (median contig length) of 104 kb. Whereas, the assembly for isolate 11100 totalled 33.2 Mb in 590 contigs (> 1 kb), with an N50 of 117 kb. We determined that the assembled genome included a good representation of the gene-coding portion of the V. nonalfalfae genome. This was done using the tool BUSCO, identifying 3663 of 3725 (98.3 %) of core, single copy fungal genes (as characterised from fungal Sordariomycetes) present in the 11043 assembly and 3673 present in the 11100 assembly (98.6%).

Through confirmatory pathogenicity screens and comparative genomics we hope to develop diagnostics to distinguish between PV1 and PV3 pathotypes. Future work will seek to gather more data on PV1 isolates and use the existing PV1 genome to help distinguish race specific diagnostic primers. This work has developed a foundation of genomic resources for the highly virulent UK race PV3 and contributes to understanding UK race structure within the V. nonalfalfae hop pathosystem.

We are very grateful to the BSPP for funding this incoming fellowship. Time spent at NIAB EMR has allowed Guiliano Manetti to develop his skills in plant propagation, pathogenicity testing and molecular biology. Verticillium wilt is a major problem for hop production in the UK and this work has provided a platform for future research. Ultimately, diagnostic tests for highly virulent races of V. nonalfalfae will allow us to assess soil health and inform decisions in hop production.