I’m an MRes student at the University of the West of England (UWE) investigating the bacterial microbiome of Tilia trees (commonly known as lime or linden) located at Westonbirt Arboretum.

Lime trees have a limited occurrence in natural UK forests, yet they are amongst the most widely planted tree species in urban environments where they provide important ecosystem services. Westonbirt Arboretum was planted in the 19th century and today has about 2500 tree species, making it one of the most important Arboretums in the UK. Several bleeding cankers were observed on a Tilia x moltkei tree last year, and my research project has been focussed on identification of the bacteria isolated from the diseased material to help reveal the cause of the disease. 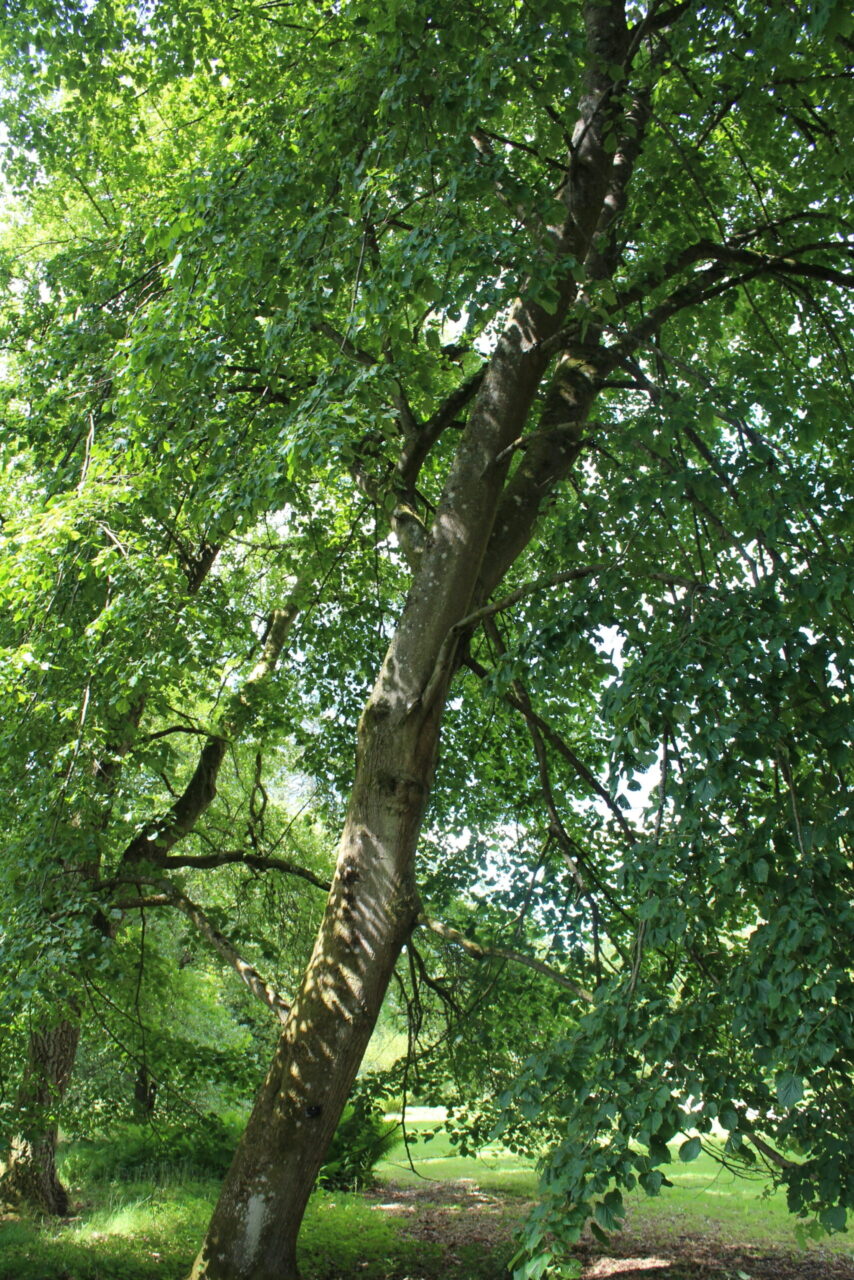 This shows a healthy Lime tree located at the Arboretum. 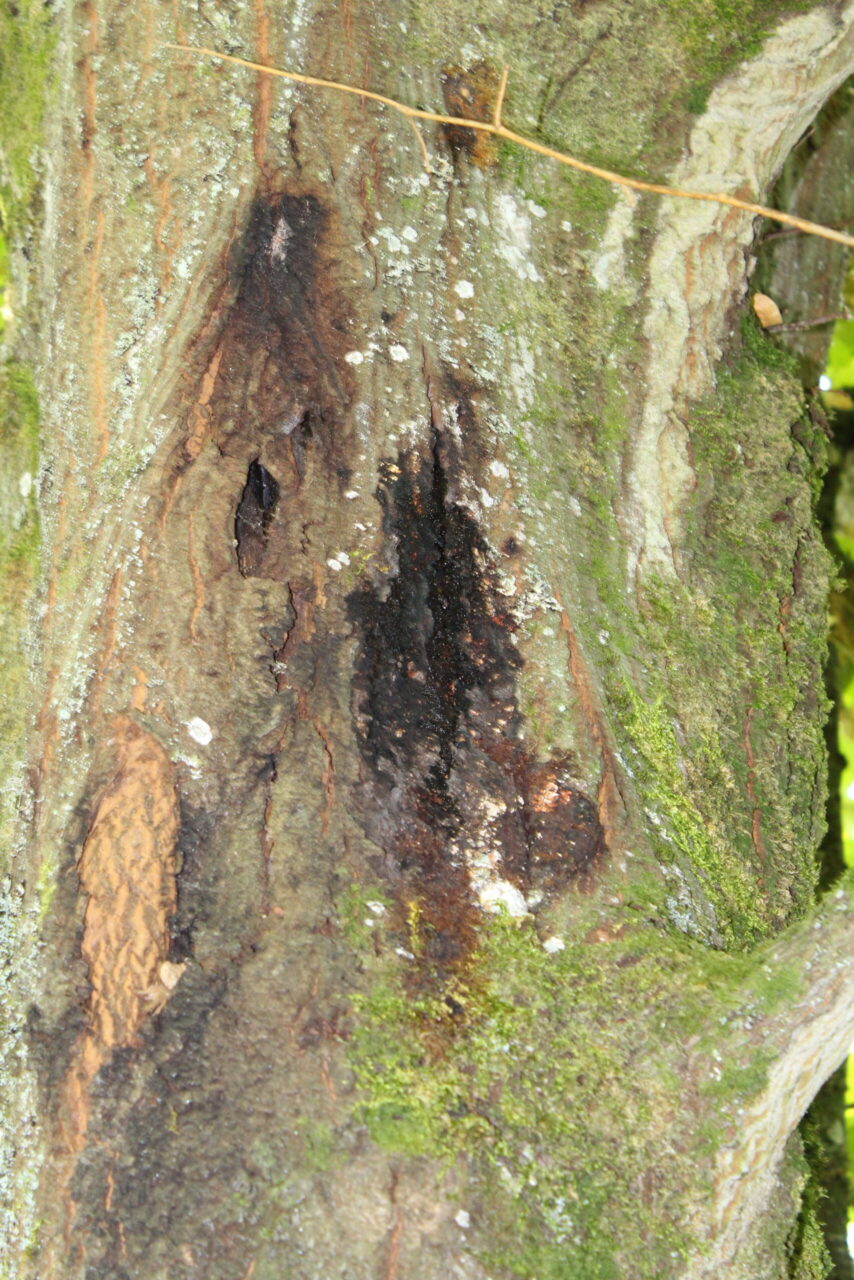 Close-up of the diseased Lime tree. Notice the dark exudate coming from the actively bleeding canker.

After working for several months in the laboratory to analyse samples taken from the diseased lime tree in autumn last year, the results were clear. A potentially new species of bacteria was abundant in both exudate and bark samples taken from the bleeding canker. The bacteria identified belongs to a genus of notorious tree pathogens, namely, Brenneria which contains species known for causing serious cankers of oak, walnut, alder and willow. A round of spring sampling at the Arboretum was now needed to check the health of the tree and to gather more material for analysis. Unfortunately, just before the trip, we received news that the tree had fallen over and would be removed after sampling. On a positive note, this allowed us to sample more vigorously. I was fortunate to receive some training on removing bark panels on a Forest Research sampling trip in Wiltshire the week before. 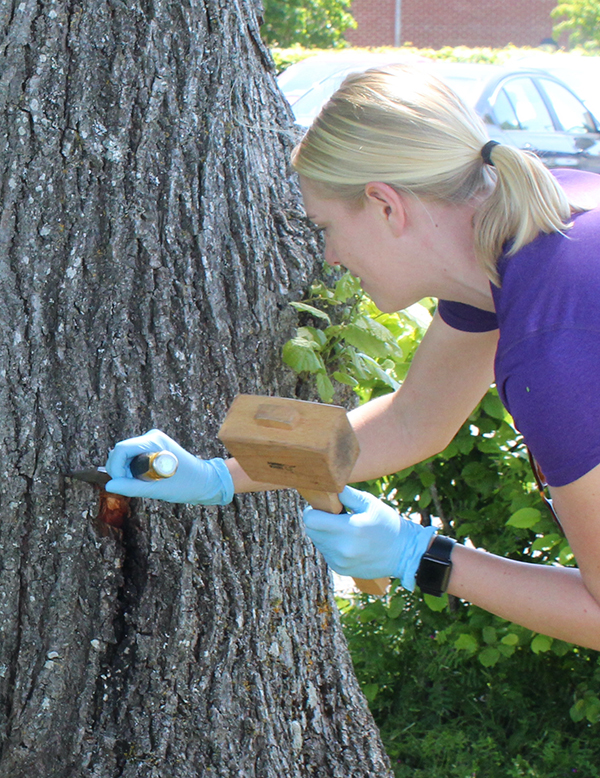 This picture shows the appropriate technique to remove the bark panels using a hammer and chisel. 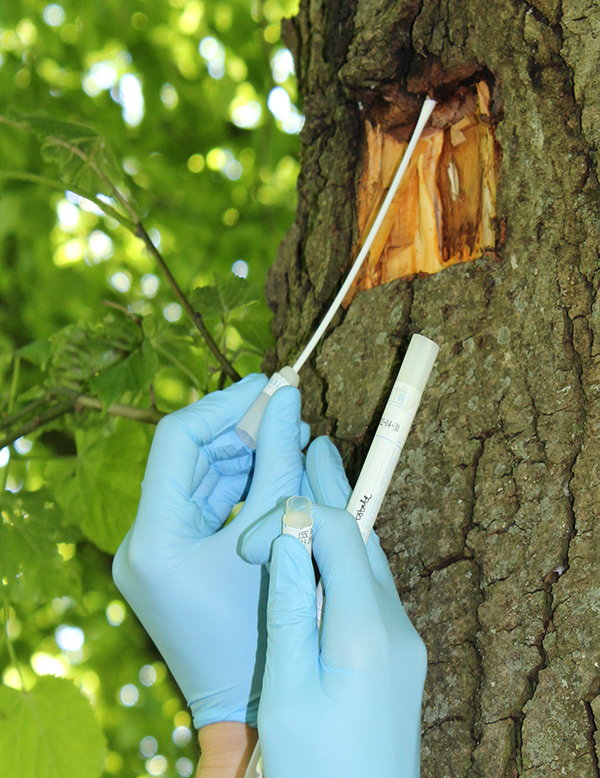 I am swabbing the bleed using a sterile cotton swab.

The day of the sampling trip was beautifully sunny and warm, showing off the Arboretum at its best. We started by locating and photographing all the cankers before removing the bark to expose the bleeds. The bark panels were placed in zipper bags for further analysis in the laboratory. 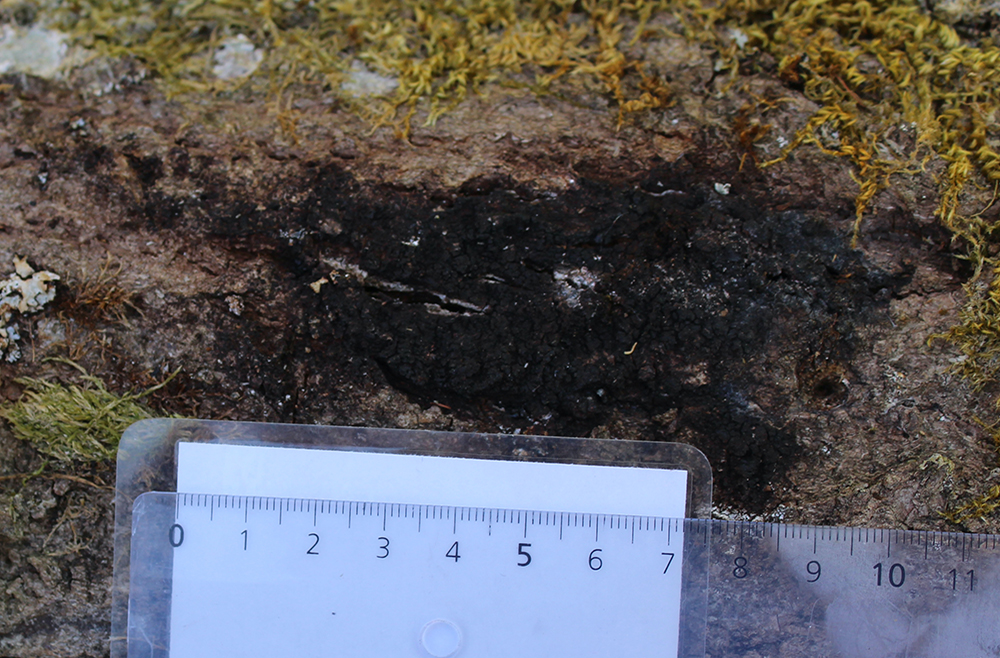 The stained outer bark of a Lime tree canker. This is a key symptom of disease. 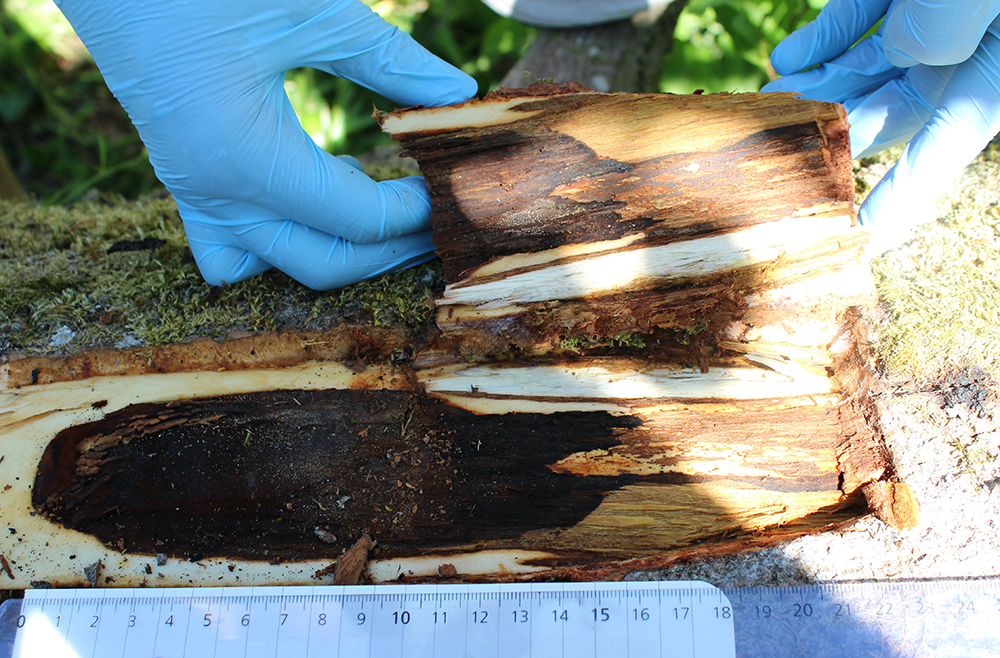 This is the same bleed after the removal of the bark panel. Notice how small the bleed appears on the outside (left image) compared to its true size after removing the bark (right picture).

We decided to uncover the entire bleed where the potentially new bacterial species was isolated from. The bleed was larger than anticipated with a total length of 110 cm.

After we finished sampling, the material was taken to the laboratory to be processed and plated onto nutrient agar for the bacteria to grow.

The next step will be to extract the DNA for PCR amplification and sequencing to reveal the identity of the bacteria growing on the agar plates, and it remains to be seen whether the potential new bacterial species are still present in the lime tree.

So far, my project has proven very intriguing and a great learning curve with many highlights like the sampling trip to Westonbirt Arboretum. The discovery of a potential new bacterial species took me and my supervisor by surprise, and completely changed the priorities of the project. In hindsight, I guess this truly demonstrates how unpredictable science can be and how we need to adapt to embrace unexpected results.  A great deal of work remains to answer important questions such as; whether the bacteria is causing the bleeding cankers, and whether other lime trees are affected. Despite not having the opportunity to sample this tree again, the vast amounts of material gathered have been frozen down and should be sufficient for future research.

I would like to thank Andrew Smith (director) and Andy Bryce (manager) at Westonbirt Arboretum for the collaboration and for being ever so helpful and accommodating throughout the sampling process.