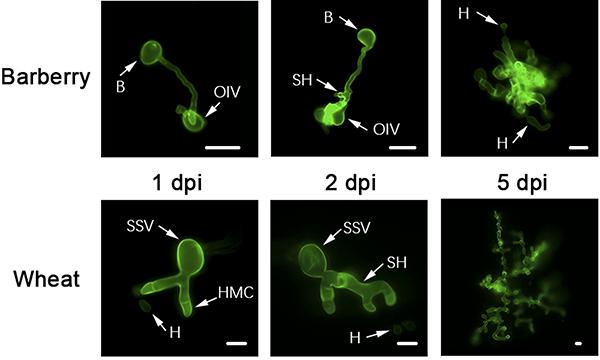 Wheat stripe rust is one of the most important wheat diseases and is caused by the plant-pathogenic fungi Puccinia striiformis f. sp. tritici (Pst). Though Pst is known to be highly host-specific, it is interestingly able to infect two unrelated host plants, wheat and barberry, at different spore stages. Pst infects wheat through its urediniospores and infects barberry with its basidiospores.

“This complex life cycle poses interesting questions on the co-evolution between the pathogen and the hosts, as well the different mechanisms of pathogenesis underlying the infection of the two different hosts,” explained Jing Zhao, an associate research fellow at the College of Plant Protection at Northwest A & F University in China.

In a recent study, Zhao and colleagues studied the co-evolutionary relationship between rust fungi and its hosts using genes specifically needed for the host infection at different spore stages. They comprehensively compared the transcriptomes of Pst during the infection of wheat and barberry leaves and were able to identify the genes needed for either wheat or barberry infection and the genes needed to infect both. They found a larger proportion of evolutionarily conserved genes in barberry, implying a longer history of interaction with Pst.

“As a matter of fact, the barberry family, belonging to primitive angiosperms and originating from 146-113 million years ago, is evolutionarily older than grasses, which means it interacted with rust fungi earlier. Thus, we postulated a hypothesis that barberry might be the primary host of Pst,” said Zhao.

Zhao pointed out that Pst cleverly applies distinct strategies to overcome various host defense systems. For example, the fungi are able to secrete different sets of enzymes to degrade different types of cell walls and cuticles based on perception of different chemical components.

Their work will contribute to a deeper understanding of the roles of barberry in wheat rust disease and sustainable control of stripe rust disease. It also provides a model to understand the evolutionary processes and strategies of different stages of a pathogen during the infection process on different hosts. Read more about this study in “Distinct Transcriptomic Reprogramming in the Wheat Stripe Rust Fungus During the Initial Infection of Wheat and Barberry” published in the MPMI journal.