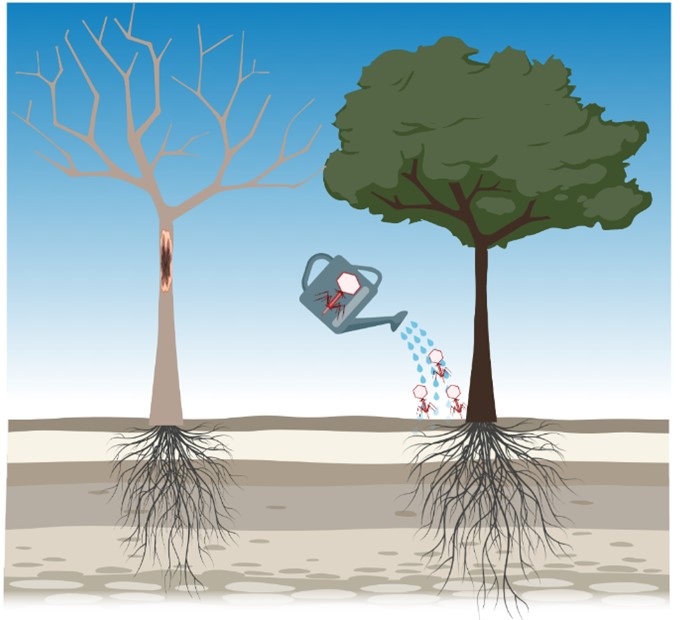 Phages are promising biocontrol agents and hold great potential as a treatment for tree bacterial diseases.

Despite the large economic and cultural importance of trees, bacterial tree diseases are becoming an increasing problem in a world of mass globalisation and climate change. Resistance to traditional disease treatments, such as antibiotics and copper pesticides, is a growing concern. There is therefore an urgent need for new biocontrol treatments. One such treatment is the use of bacteriophage (phage) viruses of bacteria that can reduce or, in some cases, clear bacterial infections.

There are multiple bacterial tree diseases that could be treated by phages in the near future. Two commercial phage treatments are already available for Erwinia amylovora infections, the cause of fire blight in pear and apple orchards. Several Pseudomonas syringae pathovars, which cause cankers of various agriculturally significant fruit trees, have been subject to extensive phage study, including: P. syringae pv. actinidae, the cause of kiwi canker; P. syringae pv.syringae, the cause of cherry canker; and P. syringae pv. aesculi, the cause of bleeding canker of horse chestnut. Moreover, phages have been isolated and characterised against several Xanthomonas species, Agrobacterium tumefaciens, Xylella fastidiosa, and Moko-disease causing Ralstonia solanacearum. However, many of these phages require further study and intensive field trials to assess their viability as a treatment in an agricultural setting.

Despite a significant increase in phage studies, there are multiple challenges surrounding phage treatment. It is vital to ensure a phage’s host range does not extend to beneficial bacteria within a tree’s microbiome, as this could decrease tree health. Use of certain phages can be limited by their survival in both storage and in the field; they are highly sensitive to environmental variables such as temperature and UV irradiation. Moreover, the parasitic nature of a phage means that bacteria can evolve resistance; the impact of this in both laboratory and field settings is subject to ongoing study.

Several studies have shown that phage treatments can be improved. Multiple phages can be applied in the same treatment, known as a cocktail, to greater reduce a bacteria population. Phages can be modified by coevolution or genetic engineering to become more infectious, resist environmental stress, or to reduce the likelihood of bacteria resistance. Phage treatments have also shown promise when applied alongside other biocontrol methods, such as antagonistic bacteria, in an integrated pest management approach. We conclude that phages are promising biocontrol agents that may prove to be highly effective in the fight against bacterial tree diseases pending further study on their persistence in the environment and methods of ensuring their virulence.

Seeing the forest for the trees: Use of phages to treat bacterial tree diseases.

TITLE IMAGE: Application of bacteriophages to trees as a treatment for bacterial diseases. Figure created with BioRender.com. All images used with permission of the author