For ten weeks this summer I worked on silencing the putative temporal regulators of parasitism in the potato cyst nematode Globadera pallida. I worked in the lab of Sebastian Eves-van den Akker at the University of Cambridge.

In background to the project, Dr Eves-van den Akker recently discovered the Dorsal Gland (DOG) Box: a 6 base pair non-coding DNA motif which is highly enriched in the promoters of effectors expressed in the same tissue, the dorsal gland. Despite that all these DOG-box containing effectors are expressed in the same tissue, they are not expressed at the same time. Therefore, there also must be temporal regulators that additionally contribute to the regulation of effectors in this tissue in particular, and in potato cyst nematodes in general. My role in this project has been to identify putative temporal regulators. Before my arrival Dr Clement Pellegrin identified and clustered differentially expressed genes to categorise different times of infection and to identify transcription factors within these categories. The goal for this project for me was to clone and silence the putative temporal regulators through exogenous application of double stranded RNA to juvenile (J2) nematodes.

The first step for me in this project was to familiarise myself with the project, the nematodes, and the genes of interest. We prioritised transcription factors based on their temporal expression profile and number of co-regulated effectors. I designed primers to clone these genes to confirm their annotation and to clone a ~400 bp fragment of coding sequence to be used for RNA interference.

In the beginning of the project I spent most of my time amplifying genes of interest using PCR in order to get enough DNA for reverse transcription. If there was a small amount of amplification I would then do a PCR product or gel purification, whichever was appropriate and use that as a template for my next PCR. If there was not amplification, which was the case for quite a few genes, then I tried changing aspects of the PCR including ordering new primers and using a higher concentration of template. I was able to get amplification of four of seven genes. One gene consistently amplified well, and became the focus of my future experiments.

I used the product from the successful amplification to create double stranded RNA. The next step after synthesising double stranded RNA is to soak nematodes in the double stranded RNA to perform the RNA interference. After some initial difficulties obtaining enough nematodes to carry out the experiment, I did eventually get enough to begin the RNAi experiment. After soaking in RNA, I extracted RNA, and synthesised second strand cDNA using equal quantities of RNA. Finally, I designed primers for qPCR to determine the level of knockdown for the gene of interest, determined the primer efficiencies, and carried out the qPCR. We were able to show a small reduction in transcript abundance of the target transcription factor, however, these soaking experiments need to be optimised to increase the level of knockdown before we can carry out phenotypic assays to determine the role of this transcription factor in parasitism.

This summer has been an amazing learning opportunity. This project has taught me that science does not always work the first time, and that perseverance is necessary. I learned what working in a lab entails, along with a variety of different lab work skills. On top of this I also learned more than I ever could have imagined about project I was working on including the nematodes and RNAi. Thank you to Cambridge University for hosting me this summer and thank you to BSPP for the funding which allowed me to work on this project this summer.

Greta working in the lab. 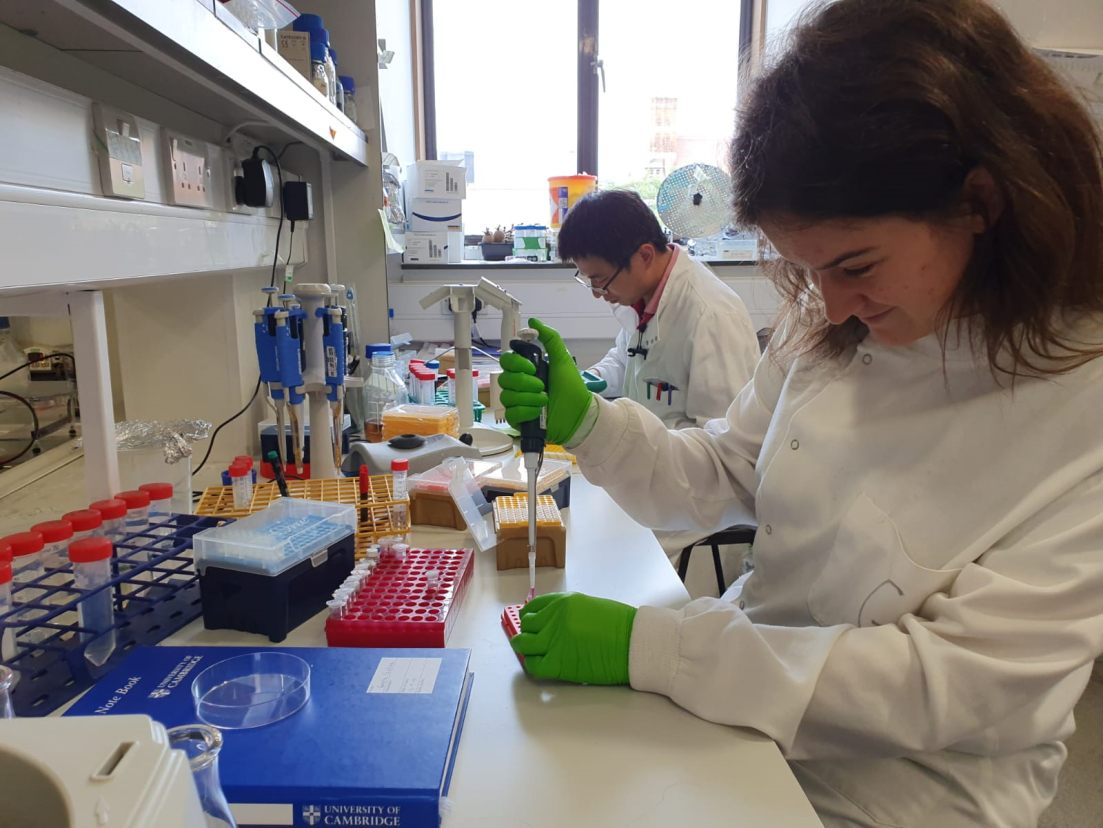