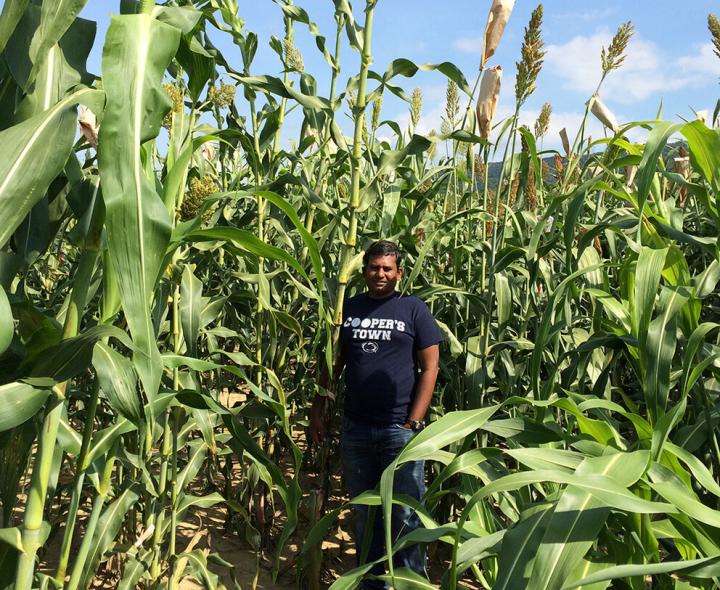 With sorghum poised to become an important crop grown by Pennsylvania farmers, Penn State researchers, in a new study, tested more than 150 germplasm lines of the plant for resistance to a fungus likely to hamper its production.

Sorghum, a close relative to corn, is valuable for yielding human food, animal feed and biofuels. Perhaps its most notable attribute is that the grain it produces is gluten free. Drought resistant and needing a smaller amount of nutrients than corn to thrive, sorghum seems to be a crop that would do well in the Keystone State’s climate in a warming world. But its susceptibility to fungal disease is problematic.

“In other locations where sorghum has been grown for a long time, it is attacked by a fungal pathogen that causes a disease called anthracnose leaf blight, which diminishes its yield,” said study co-author Surinder Chopra, professor of maize genetics in the College of Agricultural Sciences. “We conducted a three-part experiment designed to evaluate the likelihood that anthracnose will be a problem with sorghum production in Pennsylvania, and what plants might resist the disease.”

First, researchers carried out field surveys in 2011, 2012 and 2016 in six Pennsylvania locations to monitor the presence of the Colletotrichum fungus that causes anthracnose in commercial sorghum fields. They collected soil samples, plant samples and samples of the debris left by sorghum or corn, looking for the fungus at sites in Blair, Lancaster, Dauphin, Centre, Bedford and Lebanon counties.

Next, researchers grew 158 sorghum lines at Penn State’s Russell E. Larson Agricultural Research Center at Rock Springs and tested them for vulnerability and resistance to the natural strains of anthracnose fungus. They obtained plant material for many of the sorghum lines from the International Crops Research Institute for the Semi-Arid Tropics, better known as ICRISAT, India.

Other sorghum lines came from varieties Chopra’s research group has been breeding in plots at Rock Springs for years and are being tested for stress tolerance in another study. Still others came from sources such as the U.S. Department of Agriculture’s Agricultural Research Service stations in Griffin, Georgia, Lincoln, Nebraska, and Lubbock, Texas; the Grain, Forage and Bioenergy Research Center, Texas A&M Agrilife Sorghum Breeding Program; and the National Plant Germplasm System.

Lastly, researchers conducted experiments in greenhouses on the University Park campus. They chose 35 sorghum lines that demonstrated resistance to the fungus in field trials and tested their responses after inoculating them with the pathogen. The team evaluated and scored those plants for the severity of anthracnose leaf blight that developed.

In findings recently published in Crop Science, Chopra and colleagues reported that the anthracnose leaf blight symptoms were observed on the older and senescent leaves in Pennsylvania. After evaluating, in field and greenhouse tests, the performance of the 158 experimental lines and commercial hybrids, the researchers noted that they discovered sources of resistance to anthracnose leaf blight.

“Many of those sorghum lines we tested had been improved in several states in the U.S. and in other parts of the world,” Chopra said. “These should be useful in breeding programs targeted for Pennsylvania and for northeastern U.S. climatic conditions. Several lines received from ICRISAT showed the high level of resistance in the field.”

The research was done in preparation for widespread cultivation of sorghum in Pennsylvania, at which time anthracnose leaf blight is expected to become a problem for farmers, Chopra explained.

“Our study is the first to investigate the frequency, diversity and distribution of Colletotrichum fungi species on sorghum in Pennsylvania, and the first to look for disease-tolerant strains that will grow best in the Northeast,” he said. “Our findings will help develop better recommendations for sorghum growers so they can manage and proactively prevent the buildup of inoculum and resulting disease outbreaks.”

The U.S. Department of Agriculture’s National Institute of Food and Agriculture and the Fundacion Alfonso Martin Escudero for postdoctoral research provided funding for this work.

non commercial use only