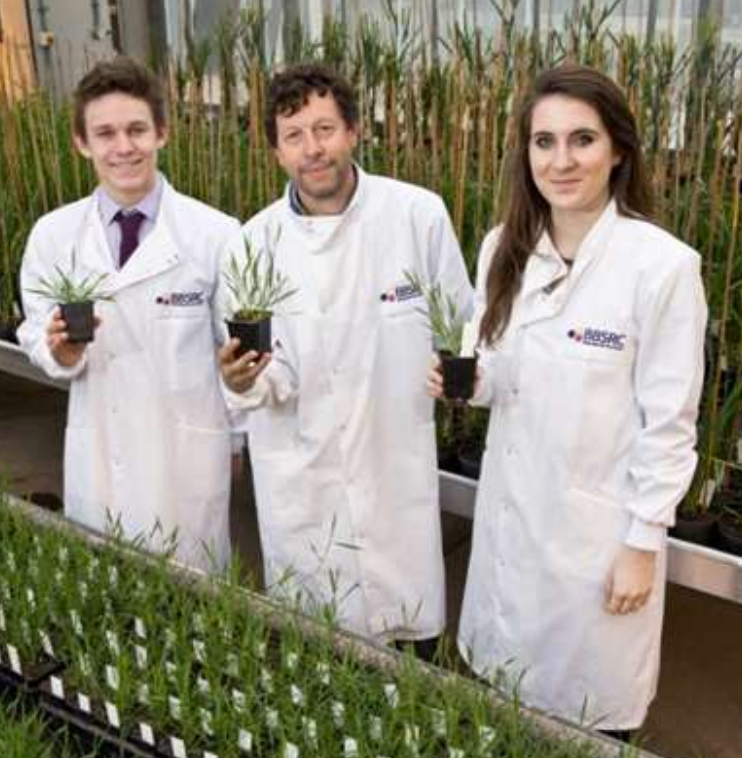 Food security is a major issue and plant diseases cause annual losses of 10% of global food production. However, pupils in secondary school have little knowledge of the importance of plant pathology and no practical experience relating to this topic.

Brachypodium distachyon (Bd) is fast becoming recognised as a new (super) model for studies of cereals including disease resistance. We have established a very simple bioassay to quantify resistance to the root pathogen Geaumannomyces graminis, causal agent of Take-all and also shown that Bd accessions differ in resistance. This project was designed to introduce secondary school students to plant pathology through a collaborative effort to screen Bd accessions for resistance to Take-all.

The simplicity of the experimental procedures makes this an elegant system with which to take plant pathology into the classroom. G. graminis produces characteristic blackening of roots making phenotyping quite straightforward.

The interaction between ourselves at the John Innes Centre (JIC) and Norfolk schools was initiated through the Teacher Scientist Network (TSN) that is coordinated from JIC. This project combined input from the BSPP (providing funds for workshops, teacher and student travel and distribution of materials), Royal Society through a Schools Partnership Award (providing funds for cameras, consumables and laboratory staff time) and the John Innes Centre (funding the multiplication of the Bd collection to provide seed for the project activities).

The project involved students collaborating between schools to identify differences in resistance to Take-all in a collection of Bd accessions obtained from around the Mediterranean. The project was intended to introduce students to plant pathology and enable them to gain skills in plant pathology, plant biology and microbiology. Importantly, due to the interactive structure of the project, they would also gain insight into the collaborative nature of much modern day research.

The project took place over several months and involved students from seven schools across Norfolk, ranging from Diss in the south of the county to Sheringham on the north Norfolk coast. An initial meeting was held at JIC to introduce the science teachers to the project. JIC provided them with hands-on experience of all the relevant techniques so that they could appreciate what would be required of the students.

Following a very positive response from the teachers, sets of core students from each school attended JIC for an ‘Introductory Workshop’. Students were introduced to the nature and importance of plant disease and plant pathology in general along with an outline of the project itself. Again, the students obtained hands -on experience in all the required plant husbandry and pathology techniques in the dedicated Chris Lamb training laboratory facility at JIC. The ‘core’ students undertook peer-education of others in their respective schools to expand the numbers of students involved in each school.

We also produced a video and document of the procedures to enable anyone to undertake these activities. A facility was also created to allow participating schools to share data files, including photographs, so allowing them to cross-reference results from different schools. Materials were delivered to each participating school and additional presentations on the project were made in schools.

Following completion of the practical work, a ‘Wrap-up’ seminar was held at JIC and all participating schools presented a summary of their findings. Members of the Royal Society outreach team attended the ‘Wrap-up’ seminar and conversed with the students. The project was successful in bringing plant pathology into secondary schools. Teachers getting to grips with the techniques involved in the ‘Supermodel’ project 17

In addition to bringing plant pathology to a network of sixth form students, there were additional opportunities to promote plant pathology and the BSPP. The project was communicated through the JIC web site and also through the Teacher Scientist Network. The project was highlighted in the JIC ‘Advances’ newsletter and on the TSN website (http://www.tsn.org.uk/Brachy.htm). It will be included in a future TSN newsletter (reaches 300 schools across the UK). The Royal Society provided details of the project on their website, providing an additional avenue for distribution to a wider audience and the project was also included on their ‘blog’ and featured interviews with students and staff. In addition, the project featured on Radio 4’s ‘Farming Today’ and in the local Norfolk Newspaper (The Eastern Daily Press).

This project brought the BSPP and plant pathology in general, to the notice of a wide range of sixth from students across Norfolk. The students gained insight into the importance of plant disease in crop production and the role of plant pathologists in assisting plant breeders and growers to combat the impact of these diseases. The pupils also gained practical skills for basic plant biology and plant pathology studies relating to an important crop pathogen through the use of a model plant species.

It was hoped that this project would inspire pupils to consider plant science as a degree choice at university and raise their aspirations about possible career choices. Notably, at the ‘Wrap-up session’ a large number of the students stated that they were including mention of their participation in the Brachypodium project in their ‘personal statements’ accompanying their UCAS applications.

The project had an additional and unexpected impact through students using the system as a base for Extended project qualification (contributing towards UCAS points) and Crest award projects.

At the outset of this project nothing was known about the extent of variation in susceptibility/resistance to Take-all in Bd populations. The project was successful in identifying Bd accessions that differ significantly in susceptibility to Take-all disease. The information gained within the project is new to science and, with extensive follow-up work in our laboratory, it is hoped that this will provide the basis for a peer-reviewed scientific publication that will acknowledge the contribution of the participating pupils.