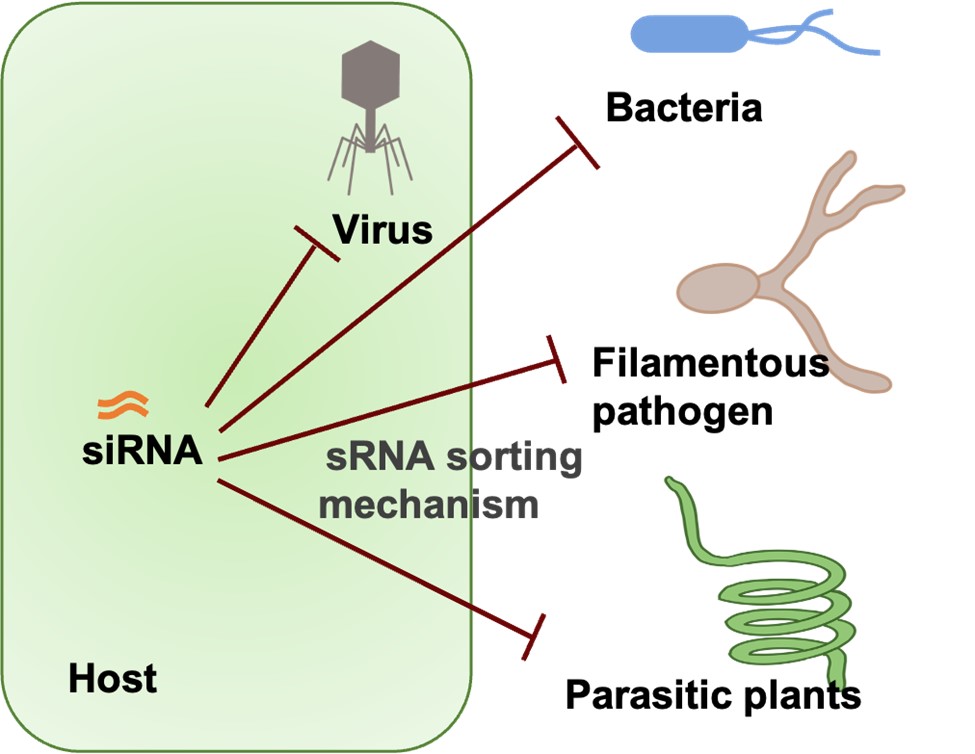 Humans and animals escape from enemies by moving to a safe place. Plants, however, are fixed to their habitats and are confronted with invasions from many kinds of parasites, including viruses, bacteria, fungi, oomycetes, insects, and even parasitic plants. Between 20 and 40% of global crop yields are reduced each year due to damage caused by these parasites. During the long time struggling with these intruders, plants have evolved complicated and fine-tuned defense mechanisms. Hence, better understanding and improving plant immunity is crucial to guarantee food security. In this review, we introduced a “small” player with a robust function in plant defense against all kinds of parasites, which is called “small interfering RNA” or siRNA.

siRNAs, one of the major classes of small non-coding RNAs, broadly regulate gene expression in eukaryotes. Based on nucleotide complementarity, siRNAs bind to and silence their target genes in a process termed RNA Interference (RNAi). The discovery of RNAi won the 2006 Nobel Prize in Physiology or Medicine. In plants, it has been revealed that siRNAs regulate plant immunity in three major pathways. The first one is the direct silencing of cytoplasmic pathogen genes, including the DNA and RNA of viruses. The second pathway is reprograming gene expression involved in plant immunity. For example, the signalling of phytohormones and the expression of cytoplasmic immune receptors are precisely regulated by siRNAs. The third pathway, which is interesting, has been uncovered that plant siRNAs move between species and silence genes in broad non-viral parasites.

Successful trans-species RNAi involves sorting of appropriate siRNAs and transportation of them from the donor plant to the pathogen recipient. In this review, we proposed potential routes of trans-species siRNA movement during infection, and discussed underlying mechanisms of siRNA selection. Beyond that, given the high abundance and diverse sequences of siRNAs, we provided the idea that plant siRNAs could be engineered and employed as a “shotgun” to defeat parasites and enhance crop yields. We hope this review can show you a detailed image of the master role of siRNAs in plant immunity.

The master role of siRNAs in plant immunity.

If you are interested in #plantviruses, #planthealth or #entomology why not join CONNECTED & be part of our Network of 1500+ members in 87 countries? It is quick and completely free! https://www.connectedvirus.net/about/join/