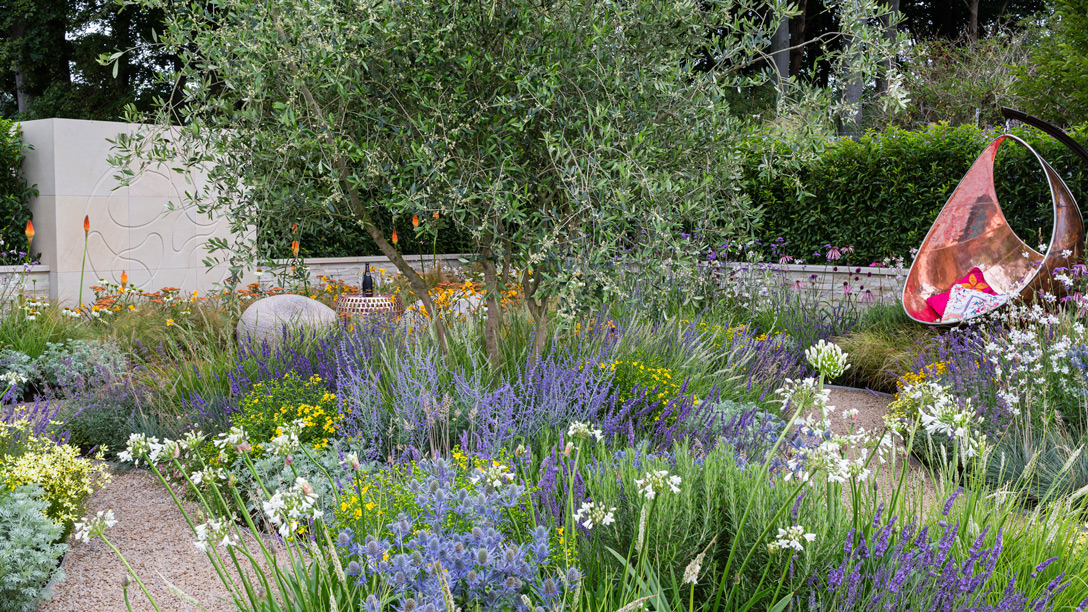 Today our food is grown on the other side of the world, the trees planted in our parks and gardens started life in European nurseries and the stone that paves our streets was likely quarried in India or China. As a garden designer this globalised economy allows for an incredible level of creativity and freedom in my work. However, with this freedom comes new challenges and hazards, of which the spread of plant pests and diseases such as Xylella may be amongst the most concerning.

In the summer of 2019, I was fortunate enough to be invited by the RHS to design a show garden for the young designer of the year competition at RHS Flower Show Tatton Park. It was important to me that the garden I designed promoted an important message to the public, as well as showcasing a beautiful and desirable garden space. The concept I chose for the garden centred around plant health, specifically Xylella, a topic that I am passionate about as a young designer starting my career and the idea of ‘The Phytosanctuary Garden’ was born.

I had noticed that Xylella was something being discussed in detail amongst professionals, but at the time the public were much less familiar with the topic compared with other garden pests and diseases such as box blight. I wanted visitors to the show to leave with a greater understanding of the risk from Xylella, and to feel empowered to help tackle the issue. As there is no viable treatment for the disease, prevention and raising public awareness are crucial to tackling this disease. The focal point of the garden was a graceful multistem Olea europaea (pictured below), a species of tree that has of course been devastated by the disease throughout southern Europe. Many of the other plants used within the design, such as Lavendula, Rosmarinus and Prunus lusitanica are also ‘at-risk’ garden favourites that have been severely affected by Xylella across the continent. One of the main challenges with the project was ensuring that we clearly communicated the message, and that by featuring ‘at risk’ plants within the garden we did not inadvertently contribute to the demand for imported plant material. All the plants in the garden were ‘UK sourced’ from responsible nurseries, with plant passports being supplied for all trees. This message of ‘responsible sourcing’ was clearly communicated to the public. We wanted visitors to consider where the plants in their garden come from and to promote more conscious consumer decisions, making the case for responsibly sourced, British grown plants.

Developing this theme further, the garden included a feature stone wall with engraved artwork (see front cover). The design was based on studies of Xylella under the microscope and explained to the public how the bacteria multiplies within an infected plants xylem. The other elements of hard landscaping such as the deck and paths picked up on this theme and were designed to reflect these flowing bacterial shapes.

So much of the control of Xylella will inevitably come down to international co-operation and governmental policy decisions, however I felt that it was important that the garden empowered visitors to the show to take an active role in protecting our landscapes for future generations. Building on the success of Defra’s “Don’t Risk It!” campaign, aimed at highlighting the risk of bringing home plant materials from foreign holidays, we devised the following ‘Plant Health Principles’ intended as practical steps gardeners could take to help tackle the issue.

The garden proved to be a fantastic backdrop to engage with the 80,000 visitors to the show and discuss the threat from Xylella as well as plant health in general. I was joined by a fantastic team from the BRIGIT project and the Animal and Plant Health Agency (APHA) who were on hand to answer any questions from the public. Additional scientific information was provided in an adjoining display which described the BRIGIT project and the Defra and APHA Don’t Risk It! campaign. The message was also discussed during the Gardener’s World coverage from the show which aired on BBC2.

I would like to thank the BSPP for their support of the garden and I am pleased to say that garden was awarded an RHS Gold Medal as well as the young designer of the year award. The feedback from members of the public was very positive and I am glad that the garden was able to help facilitate some interesting conversations regarding plant health and hopefully contribute to keeping our landscapes and gardens healthy and resilient.