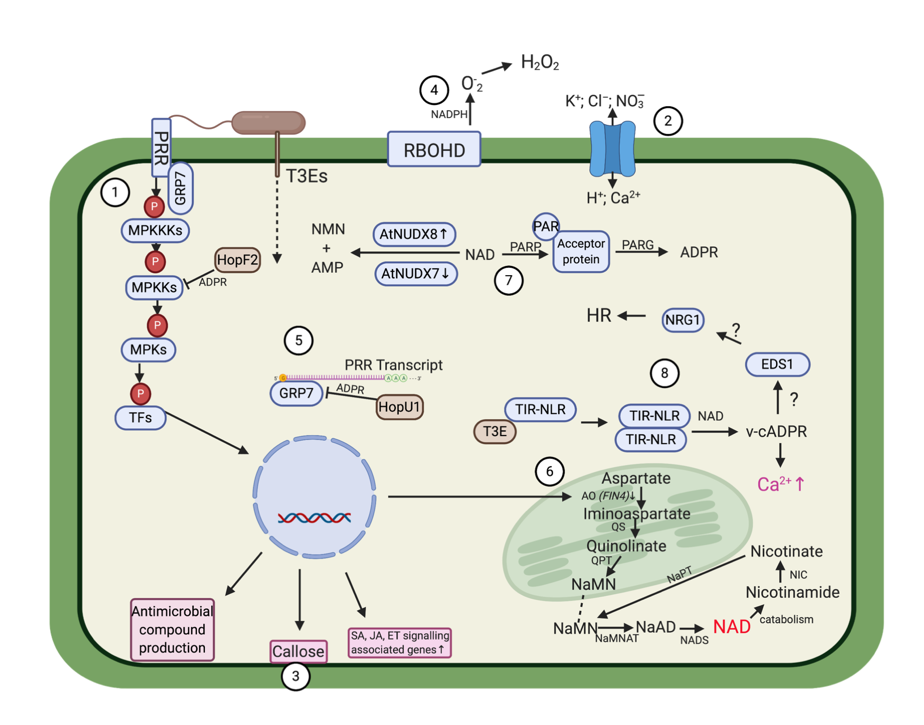 Written by Daniel Marcell Pap. This is the report from a BSPP Undergraduate Summer Vacation Bursary. Click here to read more/apply for one yourself.

Global crop production losses to pests and pathogens are estimated to exceed 30%. Understanding the molecular mechanisms behind plant defence could lead to novel ways to deploy disease resistance in agriculturally important species. Due to Covid restrictions my studentship evolved into a detailed analysis of role of NAD/NADP in plant immunity, which has to date been largely neglected. It further sought to investigate analytical methods to measure NAD/NADP related modifications with an aim to develop protocols to explore the impact of such modifications during disease and defence. I was able to provide compelling evidence from collective research over the past 20 years that NAD and NADP are not only key players in metabolism, but also play an important role in numerous parts of the plant immune system. I try to capture that in this brief summary.

In plant cells NAD mainly originates from the de novo biosynthetic pathway and the salvage pathways involved in the recycling of NAD used in catabolic processes. The first link of NAD with plant immunity was described in the late 1960s by Ryrie et al. who demonstrated that intracellular NAD levels are modulated during pathogen infection. Transgenic NAD-overproducing plants since have been shown to exhibit enhanced disease resistance against certain pathogens. NAD is most commonly associated with its key role in early PTI responses, as reactive oxygen species (ROS) bursts are mainly mediated by the membrane bound NADPase enzyme, RBOHD. NAD has also been shown to be capable of inducing an immune response by acting as a DAMP (damage associated molecular pattern).

Nudix hydrolases are clearly an important group of enzymes associated with plant immunity. The substrates of these enzymes include NADH, NAD+, coenzyme-A, ADP-ribose and other NAD associated compounds. For example, AtNUDT7 is thought to be a negative regulator of plant immunity, while AtNUDT8 is thought to be a positive regulator. Additionally, plant pathogens also utilise Nudix hydrolase type 3 effectors, e.g. Hpx26 from Ralstonia solanacearum.

ADP-ribosylation is an ancient posttranslational modification, which also plays an important role in plant immunity. PARPs (Poly-ADP-ribose polymerases) and ARTs (ADP-ribosyltransferases) use NAD as a substrate to transfer one or more ADP-ribose moieties to an acceptor molecule. ADP-ribosylation has been associated with functions in DNA damage recognition and repair, transcriptional regulation, chromatin remodelling, protein localisation and protein degradation. Potent and selective pharmacological PARP inhibitors could reveal further roles of ADP-ribosylation in plant immunity. Plant pathogen effectors also utilise ARTs to antagonise various plant defence mechanisms, e.g. HopU1 (inhibits GRP7) or HopF2 (inhibits MKK5). Strikingly, out of the 28 effectors of the hemi-biotroph Pseudomonas syringae pv. tomato DC3000, 2 are confirmed to be ARTs and at least another 2 are predicted to be ARTs. However, knowledge of their substrates is limited. While evidence is currently lacking, it can be hypothesised that the ADP-ribosylation of small molecules by pathogen effectors could play a role in metabolic reprogramming of host cells during infection. Indeed I found one paper describing ADP-ribosylation of small molecules, and in plants it has not yet been observe.

Renewed interest in NAD has been kindled by the recent discovery that Toll/Interleukin-1 receptor (TIR) class of R proteins, known as TNLs, homodimerize to form functional NADase and upon cognate effector perception this NADase activity is required to activate an HR. Interestingly, the NADase activity, which is dependent on a conserved catalytic glutamine, produces a cyclisation variant of cADPR called v-cADPR. The function of v-cADPR remains to be determined.

Thus, in summary, NAD and its derivatives appear to play important yet diverse roles in plant immunity and a better understanding of these processes warrants further investigation. 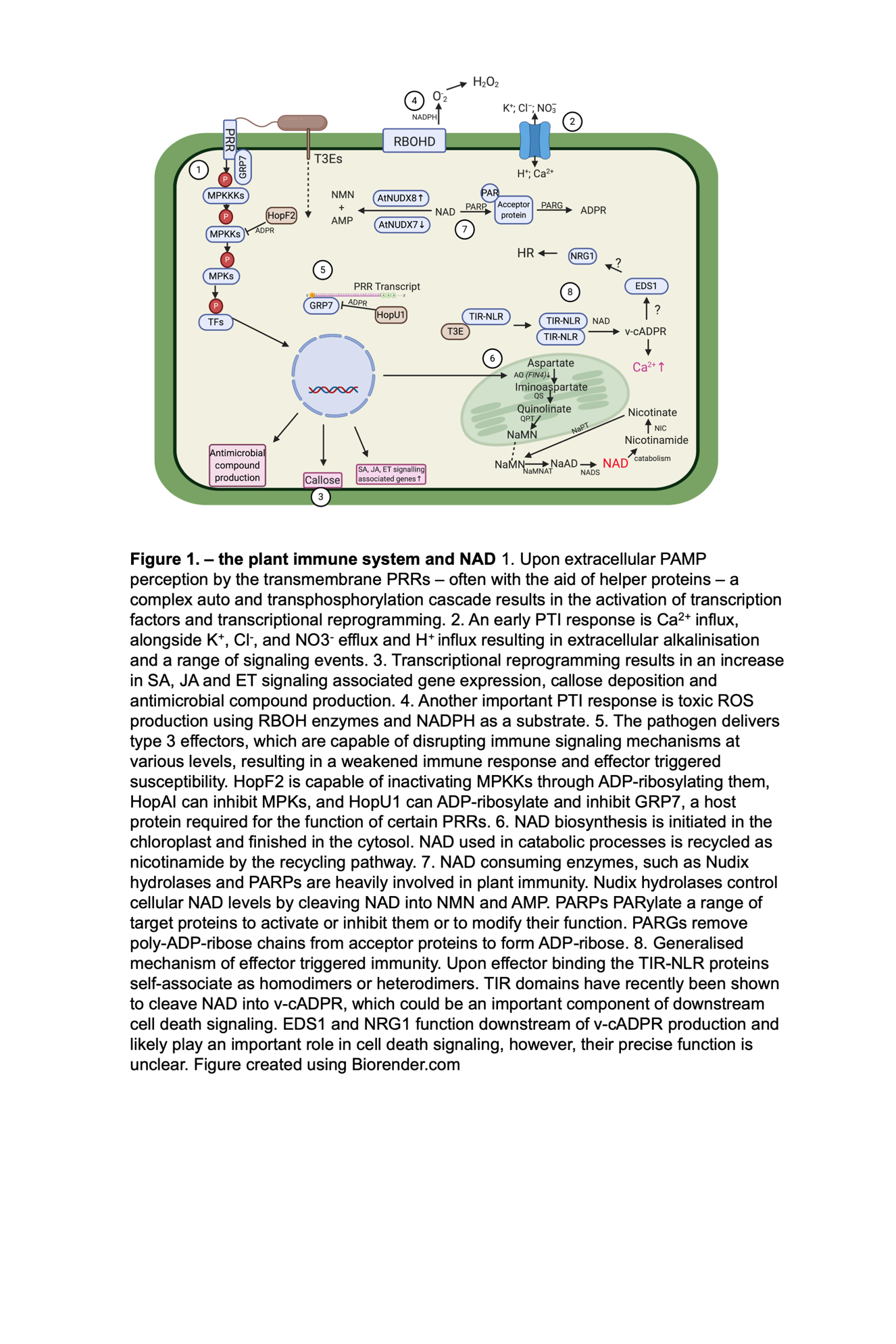