Plants have developed a wide variety of defence mechanisms against invading pathogens; one particular method is the production of R proteins. These are coded for by disease resistance genes, which are often characterised by a nucleotide binding domain and leucine rich repeat domain (shortened to NBL). It has previously been found that some plant promoters are specifically responsive to the gram-negative bacteria Pseudomonas syringae. Counterintuitively, four of these promoters were traced to an operon which encoded truncated versions of these NBL resistance genes. Why would the pathogen be inducing expression of the plants own disease resistance genes?

To study the effects of these genes on plant defences, conditional inducible lines of Arabidopsis thaliana were generated under the control of a dexamethasone (DEX; a synthetic glucocorticoid) inducible promoter which was used here to mimic effector induced NBL expression. My summer project in the Grant lab in the School of Life Sciences involved characterising DEX::NBL lines to see what impact, if any, induction of these NBLs had on plant defence.

The leaves were painted with a 10µM DEX solution the day before the experiment, in order to induce high levels of NBL gene expression within the leaves. The following day, Pseudomonas syringae pv. tomato strain DC3000, was infiltrated the leaves from four different DEX inducible lines (the insert at varying orientations in each). A Columbia (Col-0) was also infiltrated as our wild-type control. As a surrogate for bacterial growth curves, and a more quantitative method of looking at the impact of pathogens on plants, we used chlorophyll fluorescence imaging, specifically focussing on Fv/Fm which measures Photosystem II performance. The plants were placed in a FluorImager for 24 h, imaging leaves at regular intervals which allows us to measure the effect of conditional expression of NLRs compared to wild type virulent infections on chloroplast immunity. The figure (below) shows the results of one experiment; we found that DEX induction in the two independent transgenic lines (1 and 3) showed markedly more suppression of Photosystem II (shown by stronger blue colour in the leaves) compared with leaves on the same plant not treated with DEX, or lines 2 and 4 and the Col-0 control. This implies that NBL induction in these lines enhances susceptibility to DC3000. Thus, counterintuitively, this suggests that the prior expression of these truncated NBLs actually aids the pathogen in infecting the leaf of the plant. Future studies will address this finding in more detail. 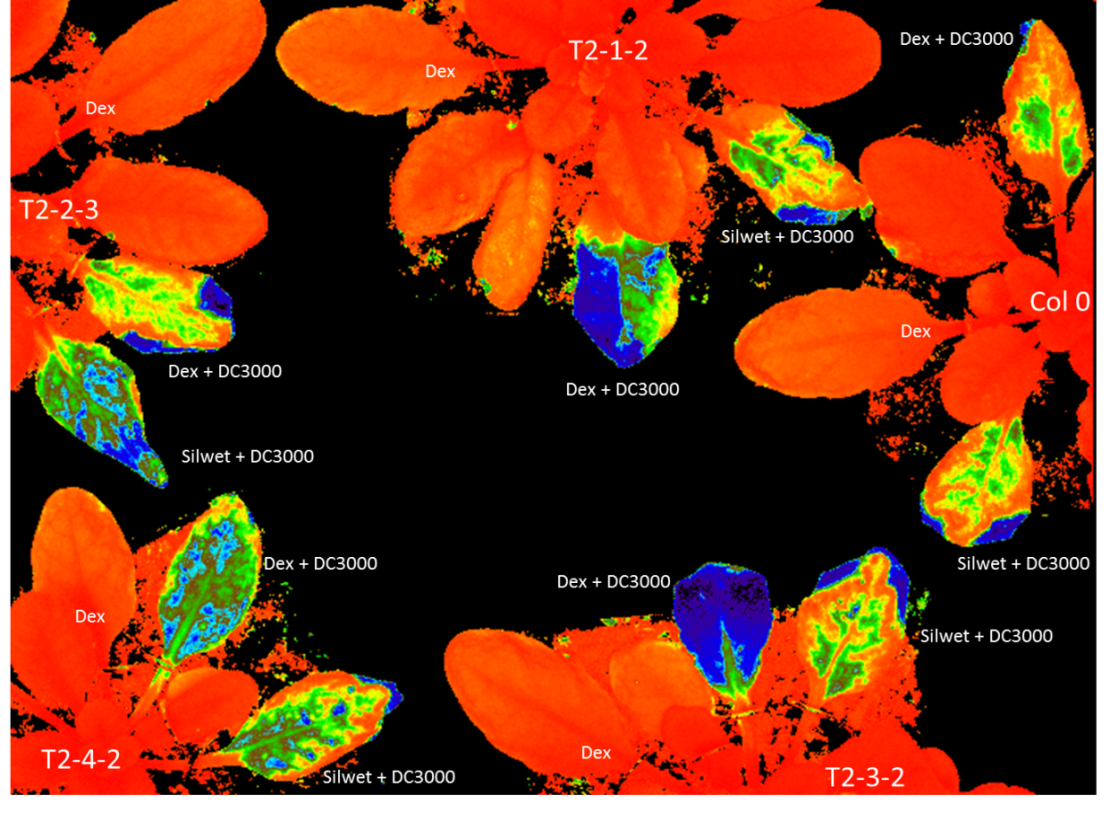 FluorImager data at 24 hours after initial infection. The blue colour represents the lack of chloroplast activity in the leaves.

Undertaking this summer placement project has significantly improved both my skills and confidence in the lab, whilst expanding my knowledge of plant pathology. The molecular techniques I have learnt will be invaluable for my future studies and hopefully, a career based within biological research. I would like to thank Professor Murray Grant and Dr Satish Kulasekaran for allowing me to gain first-hand insight into their research and guiding me through the lab. I would also like to thank the BSPP for providing the funding for this incredible opportunity.