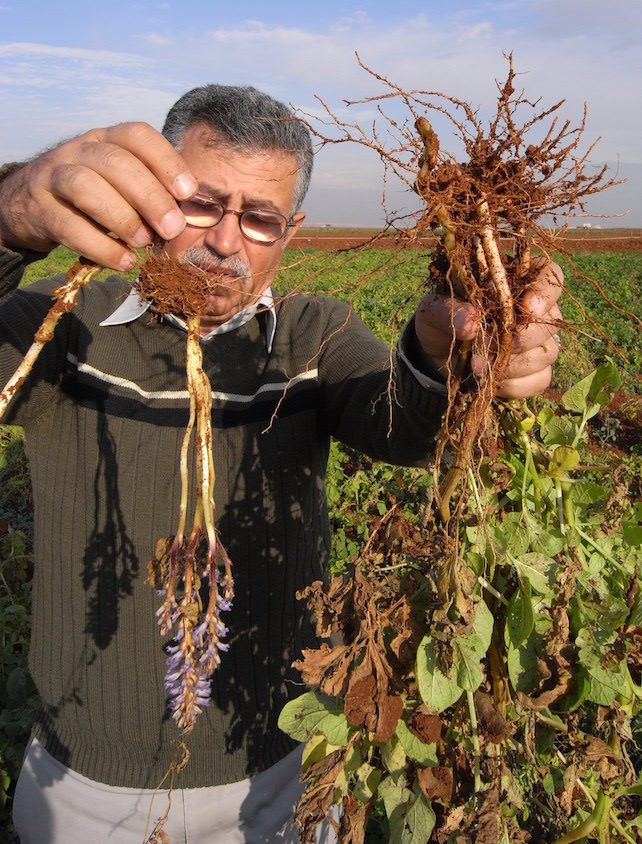 We take it for granted that major plant diseases – and insect pests for that matter – have a significant impact. But what does ‘significant’ mean and how do you measure impact?

The most common and simplest measure is to give a percentage reduction in production. Common, yet not always as helpful as it sounds. First, there is the challenge of extrapolating from trials, where plants are deliberately infected or exposed to inoculum (re photo from Kenya). Second, the full impact of a plant disease should consider value of losses and the cost of control measures (re photo of potato from Syria). Sadly, the quality of available data is variable, patchy and often missing, particularly for smallholders, who produce the majority of the world’s food.

A few years back late blight attacked the tomatoes in my London suburban garden. All five plants died sans tomatoes. It was a bad year for late blight, though the more alert growers will have sprayed fungicides and some will have escaped infection. So though it’s true to say that late blight can cause 100% losses the real production losses are much less.

CIP, the international research centre with an historical mandate for potato, estimates 15% production losses each year due to late blight. USAblight (a national project on lb on potato and tomato) says that (annual) global losses ‘exceed US$6.7 billion’. Knowing the financial costs of a plant disease tells you much more about its impact. It also makes for cogent research proposals, as a US colleague explained. A proposal to study a sugarcane disease was magically transformed when my friend and collaborators said they aimed to save industry tens of millions of dollars. Reducing losses by 3% sounded much tamer. They got the grant.

The economic costs of late blight have been estimated from fungicide sales in the US and Europe, elsewhere less reliably. There still seems to be much wagging of wet fingers in the air when estimating production losses and especially the economic costs of plant diseases to farmers. When market prices for potatoes are high, the loss of 15% production may not matter so much. When farmers in the UK were being paid around £60 per tonne for wheat, the marginal cost of spraying against aphids (which transmit viruses) rose hugely. You were damned if you sprayed, making little or no profit, and under greater risk from disease if you didn’t, tipping break-even into a loss.

Each year the World Health Organisation says how many people die from malaria and other major human diseases. I assume they compute the number from data supplied by Ministries of Health around the world. Try asking Ministries of Agriculture for similar data on plant disease losses. Indeed, it’s difficult to see who is coordinating such data and even asking for such information. FAO? World Bank? Good data do exist on the impact of plant diseases, but it is widely dispersed and difficult to find. Which makes a study we carried out in Bolivia, led by Jeff Bentley, of unusual interest.

If you want to see how to monitor disease impact, go to the US. All hats off to the University of Georgia, Cooperative Extension (UGCE) for publishing detailed estimates of crop losses. Their annual reports make for fascinating reading. Here’s the first paragraph from the 2008 report: “It is estimated that losses due to plant diseases in Georgia in 2008 amounted to $612 million. These losses include actual losses in yield and quality as well as costs of disease control measures. The value of these crops was approximately $4,846 million, which resulted in a 12% total disease loss for crops grown in 2008.”

Just to repeat: in one year, in one US state, the plant diseases resulted in over half a billion US dollars of damage. It’s a powerful statement on impact that highlights the need for continuing research and public investment in extension services. Plant pathologists have used models to predict production losses. A landmark review by Oerke in 2006 on ‘Crop losses to pests’ and is widely quoted (over 800 citations). Yet we are still missing good data on the costs and therefore true impact of plant diseases.

One of the reasons for the review’s popularity, is that it provides an easy way to justify initiatives on ‘food security’, despite the caveats on data interpretation made clear in the main text. Call it the ‘curse of the abstract’, for I suspect that few who quote Oerke to justify 40% losses across the board have actually read the paper. Such a figure sounds both too much (for production losses) and inadequate to explain the true impact of plant diseases in terms of lost income and control costs.

If Georgia can estimate economic losses then so can others. The impact of plant diseases is something that the BSPP might look at more carefully, holding joint meetings with health and agricultural economists for example. How about summer internships and fellowships? Apply here!