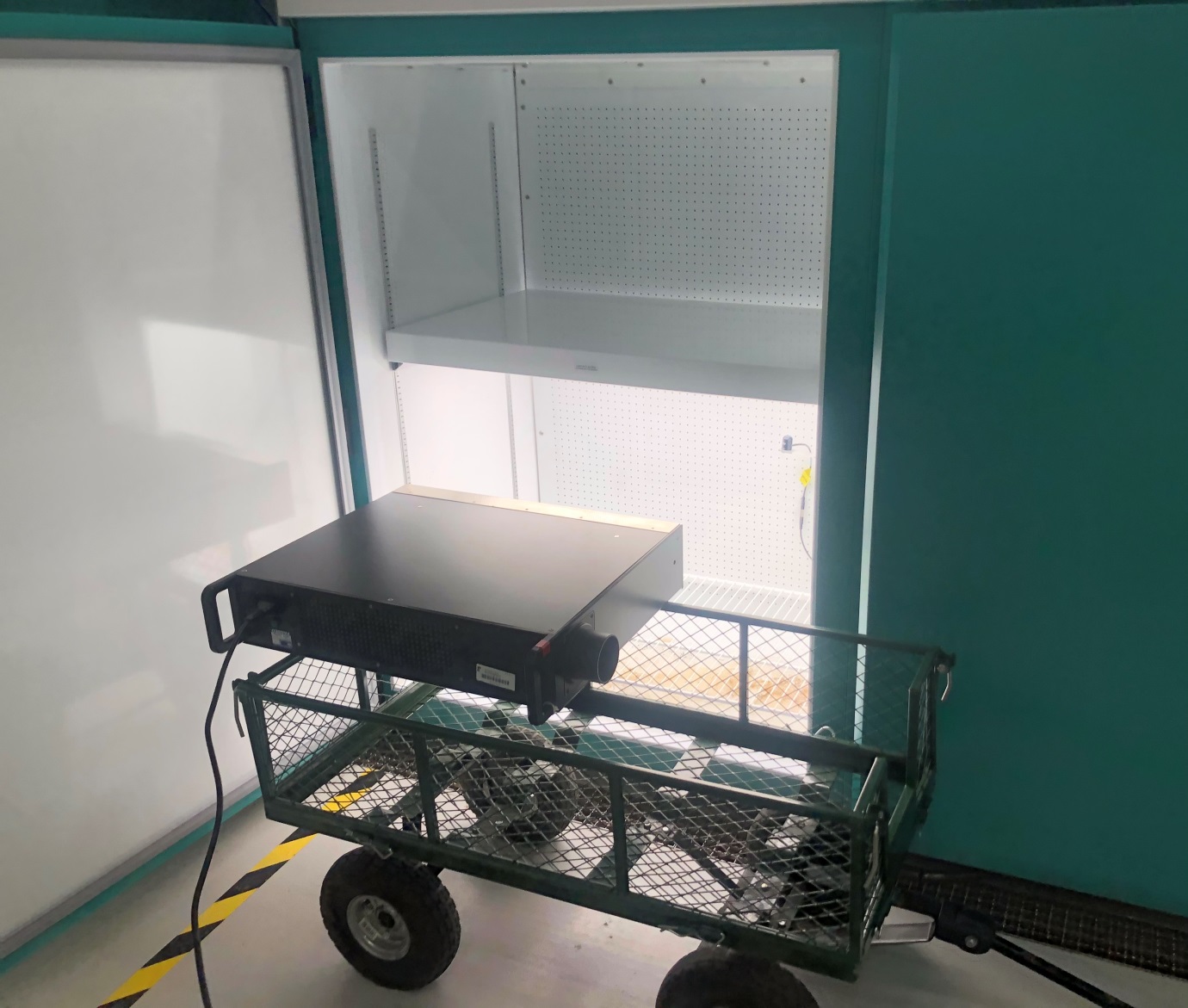 UV-C irradiation has spiked up a lot of interest recently, especially in regards to how this system can be used to solve issues that arise with conventional decontamination methods without exposing personnel to the UV-C irradiation. UV-C can also be used to control plant pathogens by hormesis which is the induction of defence responses within the plant, while also controlling plant responses via direct anti microbial action. This is potentially done by pulses of high-intensity polychromatic light and low-intensity UV-C treatments, which could be employed to control fungal pathogens such as Botrytis and others that target crop plants. Spaces like growth rooms and glasshouse compartments require regular decontamination, and conventional techniques are not always efficient or successful due to factors like human error. This downfall in conventional decontamination techniques has occasionally caused issues at the University of Nottingham when healthy cereal crop plants have been placed into the growth rooms, previously contaminated with the fungus powdery mildew, and become infected via residual inoculum left behind. This is why there is need for more efficient and reliable decontamination methods that can be used easily and safely.

I investigated this issue during my summer studentship working alongside Professor Matthew Dickinson at the University of Nottingham. We mainly looked at the fungal pathogen Botrytis cinerea as a model system with which to infect tomato plants that would then be placed into growth room compartments in order to build up levels of fungal inoculum. This ensured contamination of the compartment for detection of Botrytis DNA, and allowed for testing to take place with the UV-C light irradiation treatment. This would be performed to determine whether UV-C irradiation can successfully be used to decontaminate growth rooms, therefore eliminating any inoculum present. This will allow healthy seedlings to be placed within the growth rooms without becoming infected. In the early stages of the experiment infected plants were monitored in growth rooms for a period of two weeks during which we took swabs and analysed them using LAMP (loop mediated isothermal amplification), in order to test for the presence of inoculum. The UV-C treatment would then be used in order to test its decontamination potential. Later on in the experiment after UV-C treatment a number of swabs were taken again, as well using LAMP, to determine whether UV-C decontamination procedures were successful. This was achieved by testing for the presence of specific fungal DNA by using Botrytis-specific primers in the LAMP and real time fluorescence, to determine the effects of UV-C on spore germination. The data collected would confirm the efficacy of the UV-C in reducing the viability of fungal spores.

The data collected before UV-C treatment showed positive results for the presence of Botrytis DNA, showing that efforts to contaminate the growth cabinets were successful. The UV-C irradiation was conducted on one growth cabinet, leaving the second as a control to allow for comparison between the two. After conducting UV-C irradiation treatment, swabs were taken over a duration of three days. Analysis of the data recovered from these swabs was carried out in LAMP and revealed that cabinet one, which had received the treatment, was no longer showing signs of Botrytis inoculum contamination. However, interestingly the data also showed that the levels of Botrytis DNA detected in cabinet two, which had not received treatment, was becoming less and less with each time data was collected from that cabinet. This may be due to the conditions within the cabinets not being optimal for fungal growth, the effectiveness of the swabs, or the gradual loss of spore viability due to the continuous exposure of the spores to white light in the cabinets. The data does however suggest that UV-C irradiation did provide a rapid element of decontamination to cabinet one with the immediate elimination of detectable fungal DNA. However, more testing should be conducted on this possible method of decontamination to further understand the effectiveness of UV-C to halt the growth of Botrytis, to test the methods on other species of fungi, and to ensure that it is a safe and reliable method to use.

Overall, I would like to say that I am grateful to the BSPP for funding this experience and also I would like to thank Professor Matthew Dickinson for allowing me to assist him in this investigation as it has enabled me to gain valuable scientific experience and knowledge. Gaining this experience has sparked my interest in plants and plant pathology and has inspired me to potentially pursue a career in plant and crop sciences in the future.

Figure above: the UV-C treatment equipment set up to treat a growth room