The most visible first line of penetration defence between plants and fungi are cell wall appositions (CWAs), which are produced in response by the plant immune system. Despite an unclear spatial and temporal relationship between secretion systems and growth of the cytoskeleton to form these CWAs, the Deeks-lab has been able to show that Formin 4 is delivered to immune response sites and can contribute to local cytoskeletal dynamics. A triple mutant of Formin 4 and its homologues previously developed by Dr Michael Deeks has been able to reveal a pathogen defence phenotype which we believe to be an intermediate in severity to a complete loss of physical defence. My summer project was to target genes with functions in molecular pattern perception. We are hoping this will either amplify or suppress the severity of the phenotype in the triple mutant and allow us to discern a greater understanding of the signalling cascade leading to the formation of CWAs.

Due to the technical challenge of introducing a fourth mutation into a triple mutant by simply crossing and screening amongst a segregating population, we opted to utilise the CRISPR/Cas9 technology which previously has not been used in the Deeks-lab. We were fortunate enough to be given newly developed vectors from the Gutierrez-Marcos-lab at the University of Warwick that allowed us to not only knock out gene function but excise the gene completely. Following and expanding on protocols recommended, four distinct protospacer sequences were chosen for use in developing six separate cassettes to guide the CRISPR/Cas9 gene editing technology, three for total excision of all functional domains and the other three for single-site disruption of gene function as a backup.

The three cassettes designed to guide CRISPR to two distinct locations for excision of the gene were successfully cloned into the pUbi-Cas9 RED binary vector and readied for protoplast transfection to check efficiency. Once this is confirmed they will also be cloned into the pEci-Cas9 RED binary vector which is expressed exclusively in germline cells. Unfortunately I was not able to personally complete the transfection into Arabidopsis of our triple mutant due to timing of plant growth. However, when completed by the lab, selecting for successful and stable mutations should be much easier than it once was for the previous mutations. Once a stable line is selected the group will be able to continue their research on the Fomin 4 pathological response and investigate the relationship between Formin 4 and molecular pattern perception in signal transduction and pathogen response.

I would like to thank Dr Michael Deeks for going above and beyond with his guidance and support in helping me acquire vital skills for research, Anja Nenninger for teaching me valuable laboratory skills that I will continue to use in my future, and a special thanks to the BSPP for awarding me the undergraduate vacation bursary and granting me the opportunity to gain real experience in a laboratory environment. I thoroughly enjoyed my time at the University of Exeter and without the support provided I would not have been able to accomplish what I have. I certainly would not have had the amazing opportunity to work with the relatively new CRISPR/Cas9 system as despite this being taught about at an undergraduate level, I do not know of any undergrads that have had this chance to explore its function practically during their courses. So thank you again for this unique and invaluable experience.

The University of Exeter

Ashley working in the lab 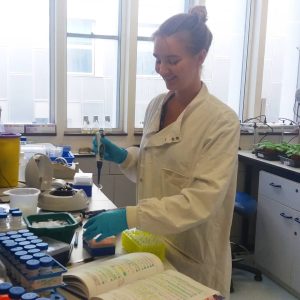