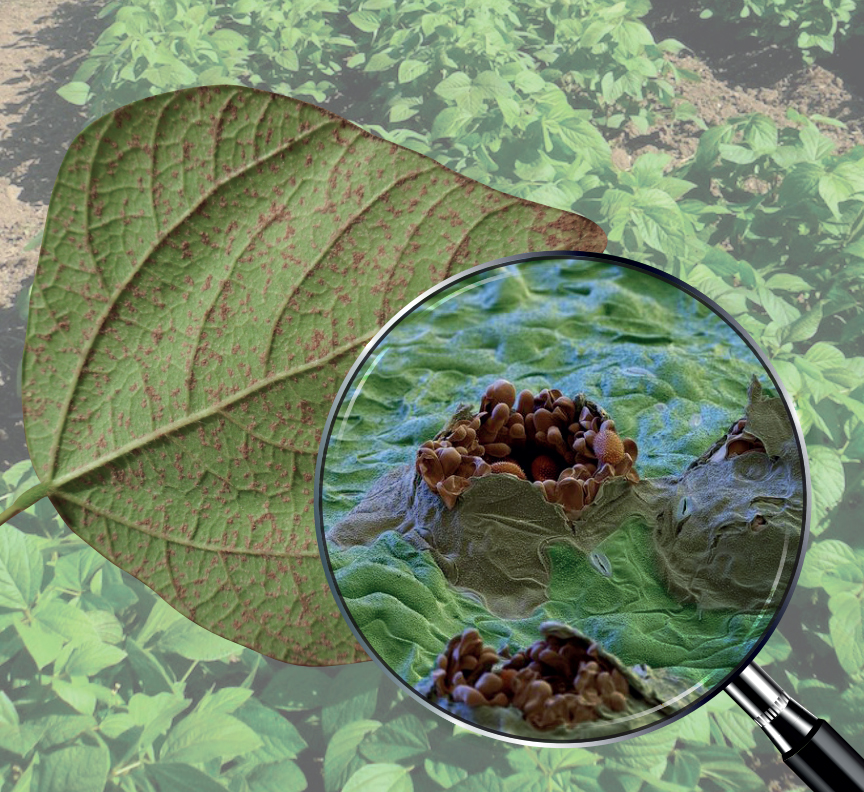 “Rust never sleeps”, so goes the song. Yet, it is actually true that Phakopsora pachyrhizi, a biotrophic fungus that causes rust on soybean, does not sleep. P. pachyrhizi has been recognized as one of the most important fungal pathogens worldwide, because of its spread across soybean-growing regions and its potential to nullify soybean yield. Genes conferring resistance to P. pachyrhizi have been identified, but pathotypes of the rust fungus overcoming these resistance genes have been found as well.

Soybean yields in Africa are generally low and this is partly due to the impact of diseases. Losses from soybean rust infection range from 10% to 80% worldwide, raising concerns about its impact on the rapidly growing soybean sector in Africa. In sub-Saharan Africa, about 6.8 million households grow soybean and the production is predicted to increase at a rate of 2%–3% per year.

Soybean rust is difficult to control, due to the existence of different pathotypes of the pathogen in a given region. Due to selection pressure, novel pathotypes arise as the pathogen evolves to overcome the resistance of the currently used soybean cultivars. Deployment of cultivars with durable resistance requires a comprehensive understanding of the prevalent pathotypes that occur in a particular region, due to the race-specificity of the available resistance genes in these cultivars. However, the diversity of the P. pachyrhizi populations in East Africa is not known.

The study also identified soybean cultivars with the Rpp1b, Rpp2, or Rpp3 resistance genes and cultivar NO6-12 (carrying Rpp2, Rpp4, and Rpp5), as the most suitable plant material for deployment in the African soybean resistance breeding programme. Results from this study form the basis for guiding the deployment of the available resistance genes in the management of P. pachyrhizi in the East Africa and underscores the need to screen for novel sources of resistance.

In a further study by the same authors, a collection of 71 soybean genotypes was screened at multiple locations in the 2016 and 2017 cropping seasons in Tanzania and Uganda, with the aim to identify novel soybean genotypes that are resistant to P. pachyrhizi. Seven genotypes that were the most resistant to rust in most locations over the two years, were identified. These genotypes will be useful for further studies and, ultimately, for rust management as they show broad resistance to various pathotypes of the rust fungus.

TITLE IMAGE: Credit to Harun M. Murithi. Image created in defence of his thesis, “Unravelling the diversity and distribution of the soybean rust fungus Phakopsora pachyrhizi  in East Africa”. All images used with permission of the author.