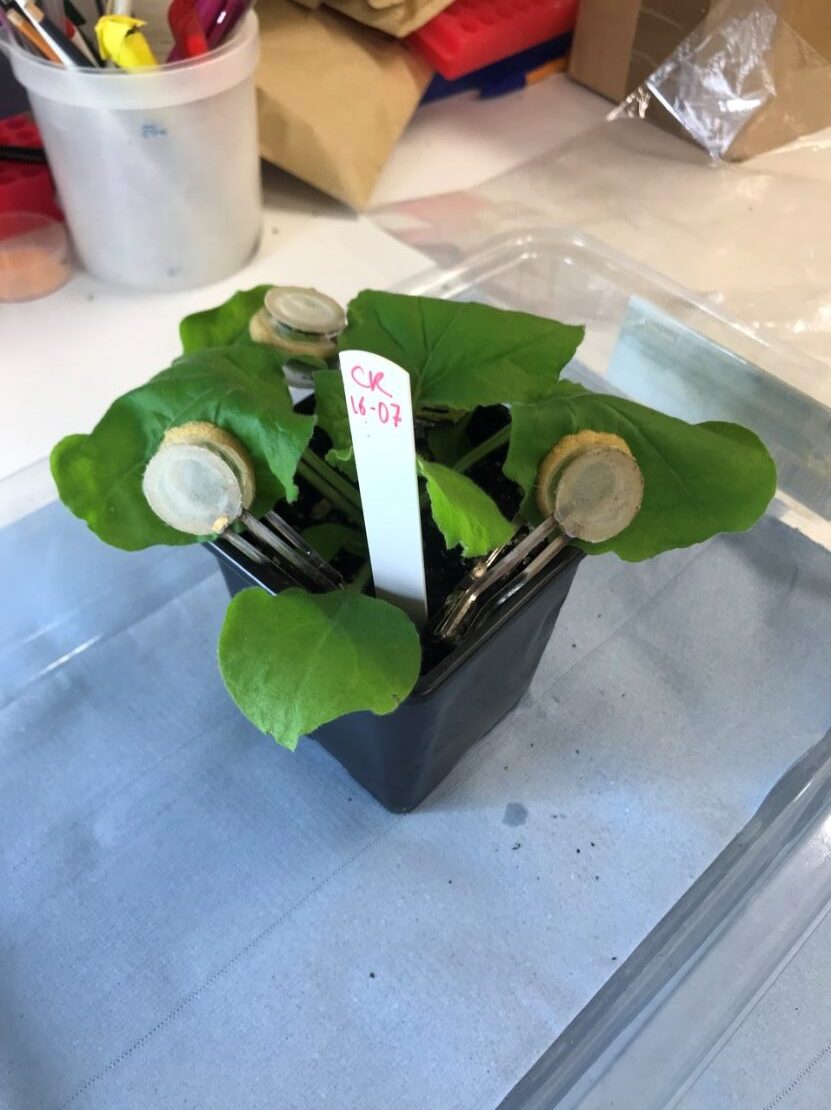 Aphids are small sap-sucking insects of the Aphidoidea superfamily. They have evolved to feed on the phloem of vascular plants including agronomically important crops. Aphids pose a dual threat to agriculture: the damage and depletion of photo-assimilates associated with feeding and the transmission of numerous infectious agents. A greater understanding of plant-aphid interactions is necessary to the development of better protection strategies. At the molecular level, a key aspect of plant defences is the recognition of proteins secreted by pests and pathogens by nucleotide-binding leucine rich repeat (NLR) proteins. These are encoded by resistance genes (R genes) many of which act as immune receptors triggering an array of defensive mechanisms. Many NLRs are thought to function in pairs (‘sensor’ NLRs for recognition and ‘helper’ NLRs for execution of cell death) and even networks (helpers working as ‘hubs’ for several sensor NLRs). My summer research project at Imperial College London, supervised by Tolga Bozkurt and Colin Turnbull, focused on the role of some of these NLRs in the immune response as well as basal and non-host defence against aphids. Due to COVID-19 restrictions, this project was split into two mini projects: the first a bioinformatics-based project focusing on the study of the RAP1 R genes and the second a lab-based project on the role of helper NLRs in aphid/non-host interactions.

RAP1a and RAP1b are two R genes found in Medicago truncatula A17 and responsible for resistance to the pea aphid (Acyrthosiphon pisum) PS01. This resistance is highly specific and only found in some M. truncatula genotypes, for example absent in DZA315.16 – DZA315.16 has a different RAP1 locus organisation and lacks RAP1a and RAP1b replaced instead by a single non-functional RAP1s gene. The aim was to study the link between RAP1 genes sequences and functionality as R genes using a range of bioinformatics tools. RAP1 genes have a classic NLR protein architecture: a coil-coil domain, a nucleotide-binding ARC domain and a leucine rich repeat (LRR) domain. The coil-coil domain is highly conserved between all versions of RAP1 (functional RAP1a and b of PS01, non-functional RAP1s of DA315.16 and other variants found and identified in 21 other M. truncatula genotypes) but does not match any previously classified NLR coil-coil domain motifs and importantly does not harbour the MADA domain thought to distinguish helper NLRs and to be necessary for the execution of cell death. This suggests that functional RAP1a and RAP1b act as sensor NLRs in the detection of pea aphid effectors. The highest sequence diversity was seen in the LRR domain, site of interaction between the R gene and the recognised effector. Using an LRR predictor, the sequences were studied as whole domains and by individual LRR motif to identify conserved and divergence patterns that may explain changes in recognition and so functionality. These domain specific studies were followed by whole sequence searches for integrated domains, transmembrane domains and protein fold predictions and together will have helped us gain a better understanding of how RAP1 resistance genes contribute to the defence against aphids in M. truncatula.

Aphids are for the most part highly specialised pests that can only infect and feed on a restricted number of hosts. The extent to which helper NLRs contribute to basal and non-host immunity against aphids is unknow. Recent work in Nicotiana benthamiana, a non-host to the pea aphid, identified two NLR networks centred around helper NLRs NCR2, NRC3 and NRC4 and around RPW8-like helper NLRs ADR1 and NRG1. Using NRC2/3/4 knockout plants combined with dual silencing of ADR1 and NRG1 using agrobacterium infiltration, I monitored pea aphid survival over 5 days on these ‘helper-less’ plants. However, this did not significantly improve aphid survival compared to wild type N. benthamiana: by day 3 over 70% of aphids had died and all but 3.33% by day 5 regardless of the gene silencing combination. Aphids can survive 4 days without feeding suggesting here that N. benthamiana defences are actively causing aphid death not just repelling aphids and that this is unaffected by NRC2/3/4 and ADR1-NRG1 network silencing: these helper NLRs and the sensor NLRs linked to them are not essential to N. benthamiana non-host resistance to aphids. Interestingly NRC2/3/4 knockout plants infiltrated with a GUS control vector allowed for a slightly better aphid survival in the first few days than non-infiltrated NRC2/3/4 knockout plants. This phenomenon was also seen in controls using generalist aphid Myzus persicae suggesting the method of agroinfiltration itself may impact plant-aphid interactions. Finally, I monitored the effect of CERK1 gene silencing, a chitin receptor essential to basal immunity and thought to link into the NLR networks. High survival was maintained for the first two days (>85% compared to <50% for other plants) before dropping down to 17% Day 3 and 0% Day 4. This points towards basal immunity as a first line of defence against aphids that is then supported by the rest of the immune system. An interesting next step would be to combine ‘helper-less’ silencing with that of receptors essential to basal immunity such as CERK1 or BAK1.

This project has not only been a great opportunity for me to develop a number of laboratory skills but has also allowed me to gain confidence and independence in my work as a future scientist and researcher. I would like to thank my supervisors Tolga Bozkurt and Colin Turnbull for their support and guidance during this project as well as the BSPP for providing the bursary that made this project possible. 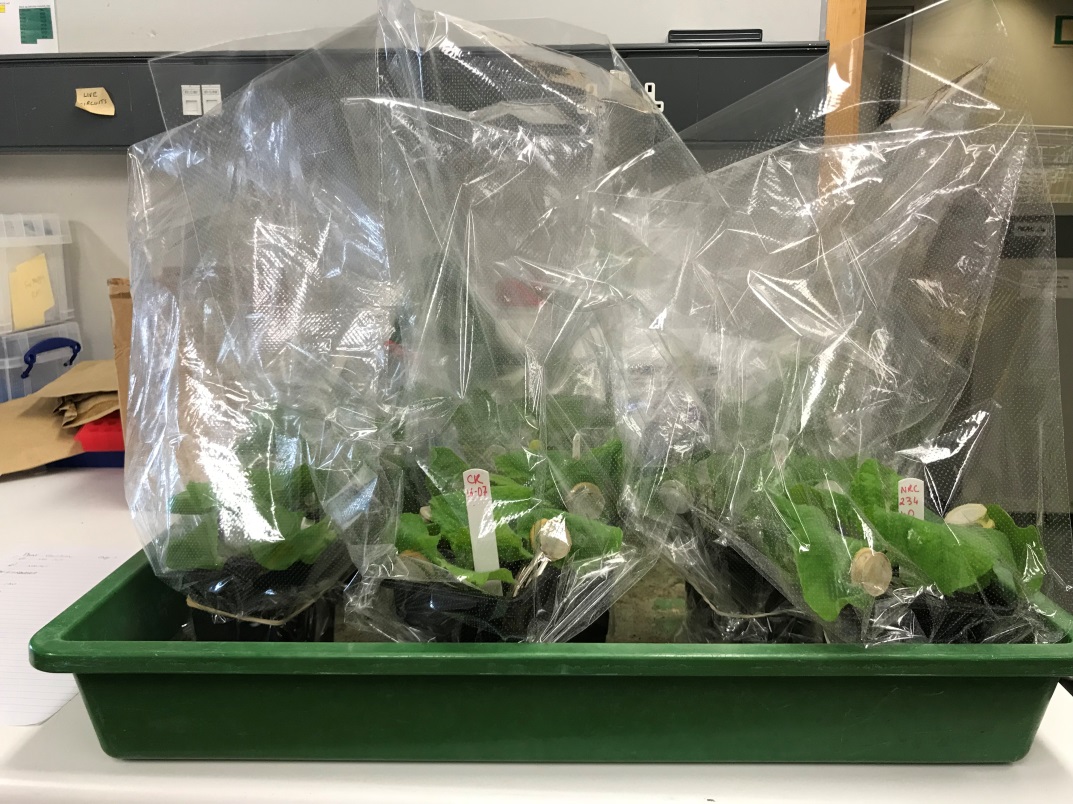