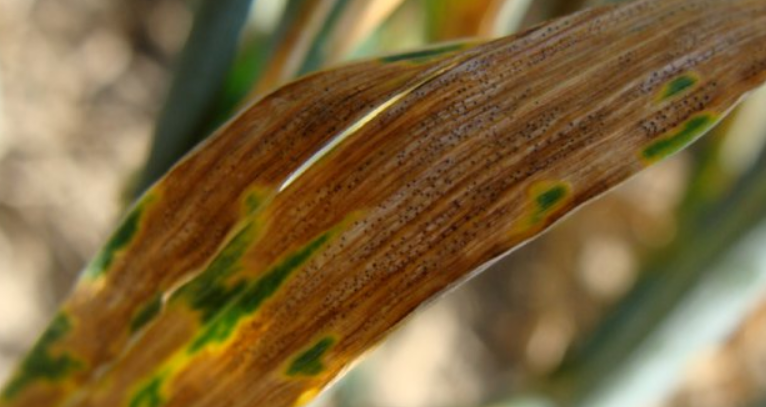 The fungus Zymoseptoria tritici is one of the most genetically diverse and devastating wheat pathogens in the world. An important step has been taken in the fight against this fungus: an international consortium that includes WUR has succeeded in cloning the resistant Stb16q-gene and successfully introducing it in wheat. The gene is now relatively easy to incorporate in commercial wheat varieties via breeding. This means that growers will have less loss of harvest and less need to apply chemical plant protection products in the future.

Wheat is the most cultivated cereal in the world, and is used in numerous products such as bread, couscous, pasta, pancakes, etc. Without proper protection against pathogens, the yields of wheat can be seriously affected. Due to climate change, extreme weather conditions are becoming more frequent, including longer periods of dry or rainy weather. The latter is the ideal breeding ground for Zymoseptoria tritici. which causes the notorious leaf spot disease Septoria tritici blotch. 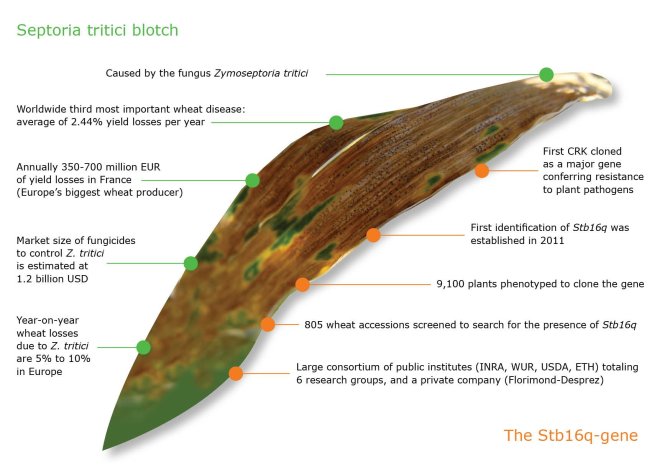 It is therefore encouraging news that a team of researchers from INRAE, Wageningen University & Research (WUR), USDA, ETH-Zurich and the breeding company Florimond Desprez has succeeded for the first time in cloning the Stb16q resistance-gene (which was discovered by WUR researchers in a wild ancestor of wheat in 2011) and introducing it into wheat.

“The inserted gene is effective against the great majority of Z. tritici variants tested so far and therefore offers a unique broad-spectrum resistance, including slowing down the penetration and intercellular growth of the fungus. In addition, the original source of Stb16q has not been affected by any strain of the fungus,” says WUR-researcher Gert Kema. A publication on this subject is published today in Nature Communications.

Many of these have been characterized. But so far Stb16q is the only cysteine rich receptor-like kinase gene. These genes are commonly known as CRK’s, and have an important role in the immune system of plants. Only once before, researchers have succeeded in cloning a gene resistant to Z. tritici in wheat. This was Stb6, a gene found in many wheat cultivars but which – contrary to Stb16 – only protects against a very narrow spectrum of Z. tritici strains. “Having both genes now enable us to identify and compare mechanisms involved in pathogen growth arrest”, says researcher Cyrille Saintenac of INRAE, the French National Research Institute for Agriculture, Food and Environment.

“This may be the prelude to an important new step in protecting wheat against pathogens and reducing the use of pesticides. Especially as these CRKs appear to be involved in disease resistance in other crops as well,” says Kema. “By identifying, cloning and introducing the resistance gene in a wheat crop that is vulnerable to Z. tritici, we have now received concrete confirmation that Stb16q offers good protection against the various Z. tritici variants. The gene is now relatively easy to incorporate in commercial wheat varieties via breeding, which means that growers will have less loss of harvest and less need to apply chemical plant protection products in the future”.