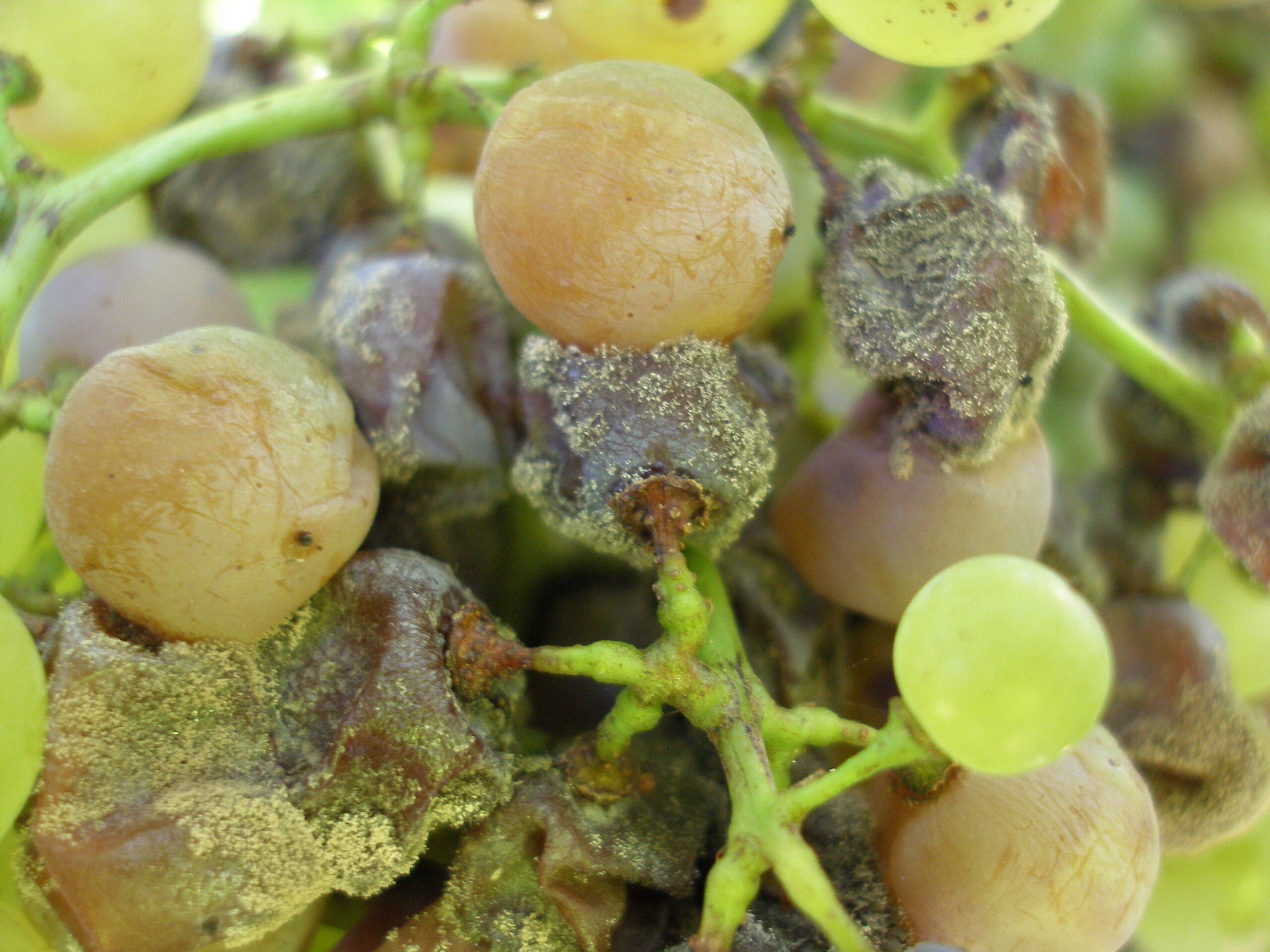 Written by Chris Steel in Professor Sarah Gurr’s lab in the Department of Plant Sciences at Oxford University. This is the report from a BSPP Senior Fellowship. Click here to read more/apply for one yourself.

Whilst bunch rot of grapes is most commonly associated with Botrytis cinerea or grey mould, it can be caused by a range of microorganisms, including a number of other pathogenic fungi.

These include species of Alternaria, Aspergillus, Pencillium and Rhizopus (frequently associated with warm dry viticulture regions), Colletotrichum and Greeneria uvicola (associated with sub-tropical climates). Disease management practices are not always successful and wine makers are faced with the prospect of processing grapes of less than perfect quality which can result in wine faults and off flavours and aromas. As a result of a BSPP Senior Fellowship, I had the opportunity to work with Dr Molly Dewey in Professor Sarah Gurr’s lab in the Department of Plant Sciences at Oxford University in order to pursue my research interests in this area further.

Detection of the fungi responsible for the bunch rot is hampered by the fact that many of the organisms result in diseases of a similar visual appearance. For example, Alternaria, Aspergillus, Greeneria and Phomposis spp produce black moulds which are often indistinguishable by the naked eye when they infect grape berries. Furthermore, bunch rot fungi are frequently found as mixed infections within a single bunch or berry. While advances have been made in the development of rapid molecular methods for fungal detection these are generally not suitable for field situations and their usefulness for detection of fungal contaminants in fermented grape juice is yet to be demonstrated. Rapid, user friendly-immunodiagnostic Lateral Flow kits that employ a Botrytis-specific monoclonal antibody previously raised at Oxford are now commercially available for the detection of B. cinerea in both grape juice and wine samples. At Oxford University I pursued this avenue of pathogen detection further. The project essentially had two parts; the first involved comparing two commercial Lateral Flow Devices (LFD) for the determination of Botrytis antigens in desert wines while the second involved the screening of monoclonal antibodies for the potential detection of some of the other fungi associated with bunch rot of grapes.

B. cinerea infection of grapes is largely regarded as detrimental to wine quality; however under certain climatic conditions when infection of white-skinned varieties occurs late in the growing season, growth of the fungus on the berry surface (noble rot) is desirable for the production of sweet dessert wines. The type of mould that occurs under these conditions is termed Noble Rot, the berries slowly dehydrate resulting in higher Brix values and the fungus produces glycerol which adds to the sticky sweet sensation of wines produced from these grapes. Occurrence of noble rot is variable and is dependent upon environmental conditions. Climatic conditions associated with noble rot occurrence include cool nights alternated with warm days and low relative humidity. Production of dessert wines is often more labour intensive, and these wines generally command a higher price point than table wines. As part of an on-going research project to characterise the sensory properties of dessert wines 25 dessert wines from Australia and France were used to compare two Lateral Flow devices, one produced by EnviroLogix, USA and the other by Forsite Diagnostics, UK for the detection of Botrytis antigens. Both devices employ the same Botrytis-specific antibody and use a sandwich assay format but differ in the nature of the particles used to bind the Botrytis antibody and the control line antibodies. EnviroLogix use immune gold particles and anti-mouse antibodies whilst Forsite Diagnostics using blue latex particles and anti-rabbit antibodies. The LFD device produced by Forsite Diagnostics is encased in plastic and is consequently more robust for field use.

There was a good correlation between the results obtained with both devices and tests done on a standard wine indicated that there was little variation between replicate bottles of the same vintage. As expected significant differences were found between the different wines analysed and this could be attributed to seasonal differences in noble rot incidence in the vineyard. On-going work will examine both the chemical and sensory properties of these wines to determine if a set of sensory characteristics can be correlated with the amount of B. cinerea present in the wine.

Although B. cinerea is often the predominant fungal pathogen associated with the rotting of grapes, other fungi equally capable of rotting mature grape berries are often isolated from vineyards. The second aspect of this project involved an examination of experimental wines made with bunch rot grapes affected with grey mould rather than noble rot.

The preliminary work for this aspect of the project commenced several months prior to the commencement of the Fellowship. During February 2011 (summer in the Southern Hemisphere) wine grapes (cultivar Semillon) from a commercial vineyard in Southern NSW were selectively harvested based on the degree of B. cinerea grey mould infection and small batches of wine were made from the grapes. Unfermented juice samples and finished wine samples were then analysed at Oxford University. Two further sets of experimental wines were also used in this project, a chardonnay wine made in 2002 with different levels of bitter rot (Greenaria uvicola) from the Hunter Valley, NSW and a cabernet sauvignon wine made in 2003 with different levels of ripe rot (Colletotrichum acutatum) from the Hastings Valley NSW. Both of these regions characteristically experience warm temperatures and high rainfall during the summer months making these areas a paradise for a plant pathologist!

A series of monoclonal antibodies previously raised by Molly Dewey and co-workers were screened using an ELISA assay for their potential to detect and quantify other fungi found in mixed bunch rot infections that could potentially be present in these experimental wines. While no monoclonal antibodies were found that were specific for either C. acutatum or G. uvicola, screening of the experimental wines suggested that other fungi such as Aspergillus and Alternaria were also present. Platting out of grape berries from the wine made from the fruit harvested in February 2011 confirmed the presence of these two bunch rot fungi in addition to B. cinerea. Furthermore the degree of grey mould infection in the vineyard correlated with the amount of Botrytis detected in the wine.

The results obtained in this project will form the basis of further research in this area, and the LFD technology has wide applicability for the wine industry.

Finally I would like to thank Sarah Gurr for giving me the opportunity to work in her laboratory and Molly Dewey for her collaboration and facilitating my time at Oxford. I’d also like to thank the staff and students at Oxford for making me feel most welcome and the many research discussions we had. Aside from my work on the monoclonal antibodies my time at Oxford was also an opportunity to learn more about Magnaporthe oryzae and the exciting research being conducted by Sarah Gurr’s laboratory.