Take-all is a root disease of wheat caused by the ascomycete fungus Gaeumannomyces tritici (Gt). Take-all is one of the most important root diseases of cereals world-wide and severe infection carries significant financial implications; Gt colonises the roots of wheat, invading through the root cortex and colonising the stele, then causing necrosis of the vascular tissue which disrupts nutrient and water uptake. Stunted growth and premature ripening are seen above ground, with up to 60% grain yield losses. Gaeumannomyces hyphopodioides (Gh) is a non-pathogenic relative which also colonises wheat roots, but is unable to penetrate fully through the cortex, leaving the root vasculature undamaged. Gh has been suggested as a biocontrol agent for Take-all though its mechanism of restricting Gt colonisation is not fully understood.

Early Take-all infection is not easily detectable above ground, the characteristic black lesions produced by the disease are localised to the roots, so an effective way of detecting the presence of the fungus without disturbing plants could have significant implications for the control and treatment of the disease. Furthermore, the detection of Gh could help to inform a farmers control strategy. Currently, molecular detection methods are expensive and time-consuming.

Volatile organic compounds (VOCs) are organic exudates produced by an organism that exist as a vapour at room temperature. VOCs can be dissolved in ether to allow analysis. The basis of my research project was to compare the VOC profile of wheat plants colonised by Gt and Gh in order to assess the potential for exploiting any apparent differences for use in the detection or treatment of Take-all disease.

I conducted a pot-test bioassay where I collected the volatile samples from the rhizosphere of 5 treatments with 3 replicates. The following treatments were sampled from: T1= Gt inoculum, T2= Gh inoculum, T3= Mock inoculated control + wheat, T4= Gt inoculum + wheat, T5= Gh inoculum + wheat. In 3 out of 5 treatments, the pots were baited with 9 pre-germinated, surface sterilised Hereward seeds, followed by a layer of horticultural grit. A 1m length of polydimethylsiloxane (PDMS) tubing was looped throughout the substrate. The use of PDMS tubing to collect VOCs within the substrate is a novel approach that mimics natural conditions better than hydroponic or aeroponic systems which are more commonly employed in VOC research.

Pots were removed from the growth room and ether was forced through the lumen of the PDMS tubing and collected in a vial to elute any VOCs held by the PDMS; the same was done with methanol to collect any non-volatile exudates. The roots of the seedlings from the pots extracted were washed and imaged using a stereo microscope and assessed for severity of take-all disease and extent of Gh colonisation.

The ether samples were analysed using gas chromatograph mass spectrometry (GC-MS) using a 10m column, and the methanol samples were run on an HPLC. I identified two Gh specific volatiles in the ether samples, one of which was present in all Gh treatments, the other was only produced in the presence of Gh and wheat. A non-volatile chemical exudate specific to Gh was identified from the methanol samples and found in the cumulative water run-off from each plant.

To aid in the process of isolating the source of the volatiles produced I carried out a fungal air entrainment experiment to extract and analyse the volatiles produced by the two fungi in vitro. PDA plates inoculated with 2 plugs in a series of combinations of control Potato Dextrose Agar media, Gh and Gt were entrained for 20 hours, with air flowing across the surface of the plate channelled through a glass tube containing an absorbent material called Porapak. The VOCs were eluted from the Porapak using ether, which was run on a GC-MS, which showed the presence of another Gh specific volatile, which appears to be a distinct compound from those produced in planta. Further work is required to identify these volatiles in order to utilise them as markers for Gh identification in the field.

The 10 weeks I spent at Rothamsted, made possible by the BSPP, provided me with invaluable life and lab experience and introduced me to a huge range of new techniques and technologies that will serve me throughout the rest of my degree and research career. 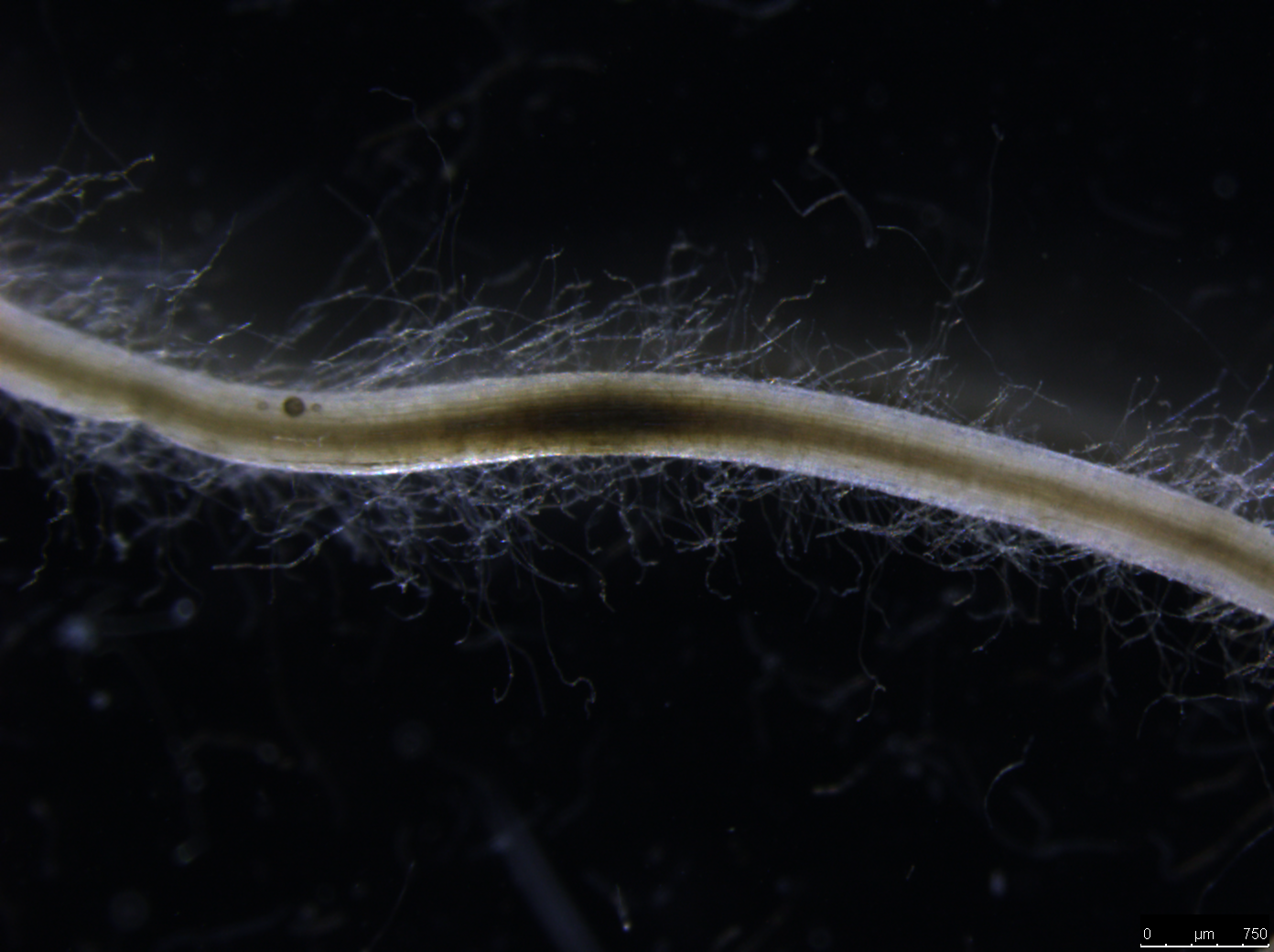 Gaeumannomyces hyphopodioides (Gh) viewed at 39x magnification using a stereo microscope. This image shows the dark runner hyphae on the root surface and the formation of sub-epidermal vesicles. Note the lack of root stele colonisation. 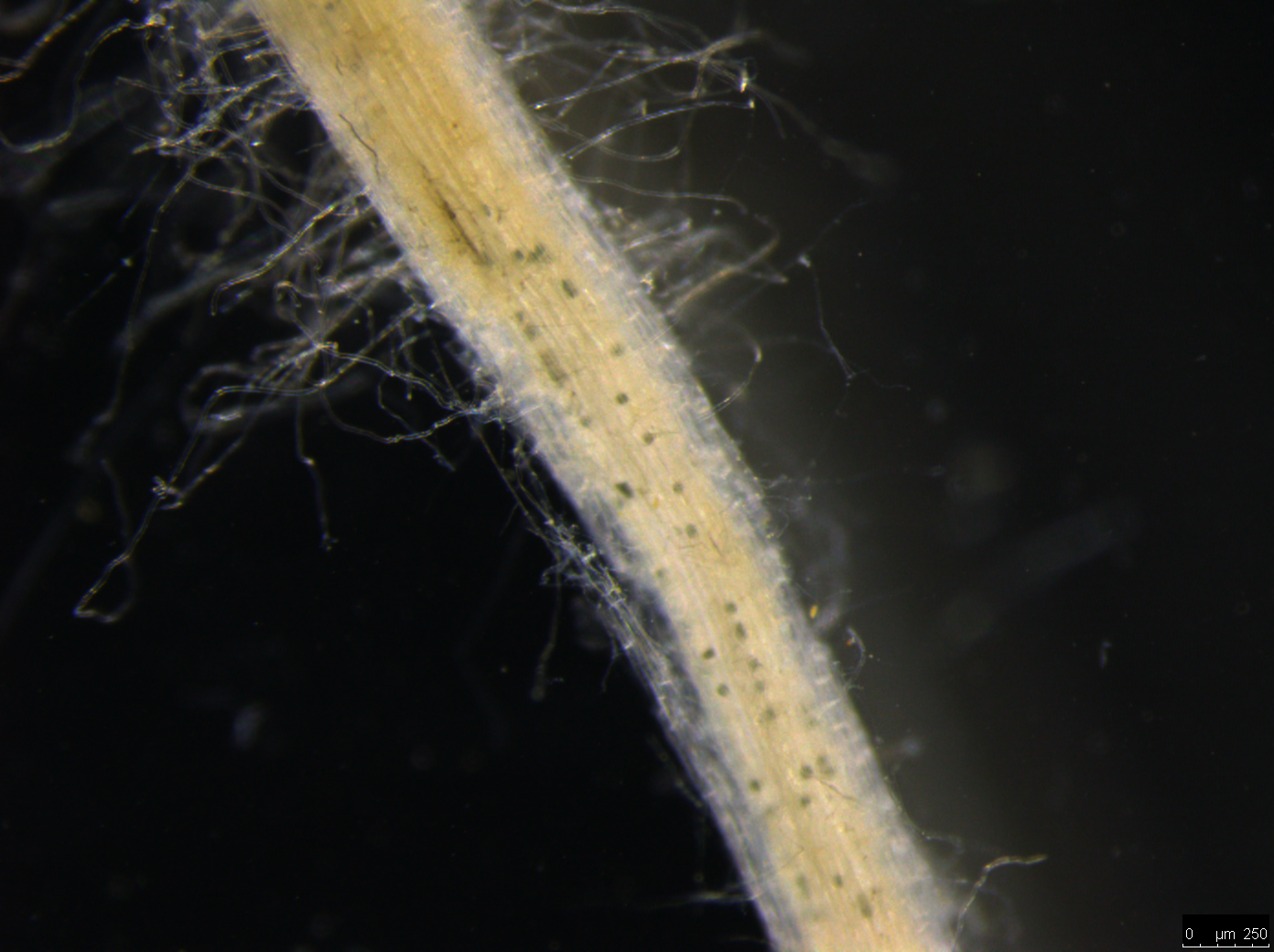