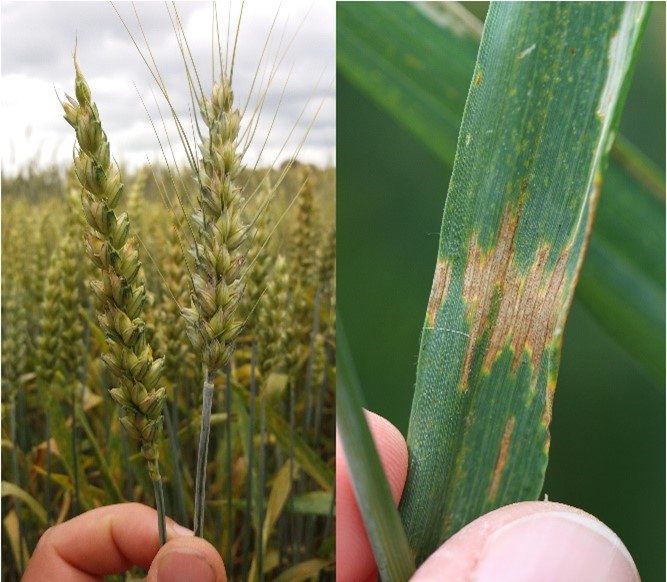 Septoria tritici blotch (STB), caused by Zymoseptoria tritici, is one of the most destructive foliar fungal diseases of wheat. For her PhD, Carolina Orellana-Torrejon investigated the effects of mixing different wheat varieties within a field on the evolution of the local pathogen population. She explored the question of the trade-off between the efficacy and the durability of the resistance deployed in mixtures.

In conventional wheat crop systems, most fields are sown with a single variety (cultivar), in which effective resistance to diseases usually depends on the use of one ‘qualitative’ resistance gene, carried by one variety rather than diversified genetic sources. This type of disease resistance can be “broken” as adapted fungal strains, called ‘virulent’, emerge and spread within the pathogen population. Growing several cultivars in the same field, a practice known as ‘cultivar mixtures’, reduces the intensity of pathogen epidemics. This practice could also help to control the evolution of a pathogen population, as it is more difficult for it to adapt to different resistance genes carried by several cultivars. However, until now it was not known whether crop mixtures can affect this evolution at field scale, and, if this occurs, the epidemiological mechanisms that drive these effects.

In a field experiment over two annual epidemics, we investigated changes in Z. tritici population features related to the adaptation to a resistance gene in three binary cultivar mixtures (in proportions of 0.25, 0.5, and 0.75) and in plots of each cultivar grown alone (‘pure stands’). One cultivar was susceptible to STB (Apache or ‘susceptible cultivar’) and the second one carried the recently broken-down Stb16q gene (Cellule or ‘resistant cultivar’). We characterized fungal populations at the early (t1) and the late (t2) stage of a wheat growing season and after, during the interseason period, when sexual reproduction takes place in wheat residues (t3). To do so, we assessed population ‘size’ by measuring diseased surface on leaves (t1 and t2) or by estimating the number of spores discharged from wheat residues (t3). We assessed population ‘composition’ based on changes in the number of virulent strains against Stb16q (frequency of virulence) in each cultivar and mixture by phenotyping more than 4,400 strains in seedling assays under greenhouse conditions.

Our findings highlight two epidemiological processes affecting the adaptation to resistance of Z. tritici populations in mixtures. First, the asexual selection of virulent strains within the fungal population between t1 and t2 driven by rain-splash transfers of spores between cultivars during the growing season. Secondly, the existence of sexual crosses between avirulent and virulent strains between t2 and t3 driven by changes in the probabilities of physical encounters of spores. We proposed potential compromises that could be taken into account when deploying a resistance gene in cultivar mixtures: between the dual objectives of efficacy and lifespan of the resistance gene, and between the ‘size’ and ‘frequency’ of the virulent part of the pathogen population. Mixtures therefore appear to be a promising practice for using resistances genes, not only to limit the intensity of STB epidemics, but also to reduce the risk of breakdown of resistances by managing evolution of the pathogen population at a pluriannual scale.

TITLE IMAGE: Wheat (Triticum aestivum) cultivars Apache and Cellule (left) collected in the mixture plots in the left photo. Lesions of septoria tritici blotch (STB) developing on the leaf of wheat cultivar Apache in the right photo. All images used with permission of the author.