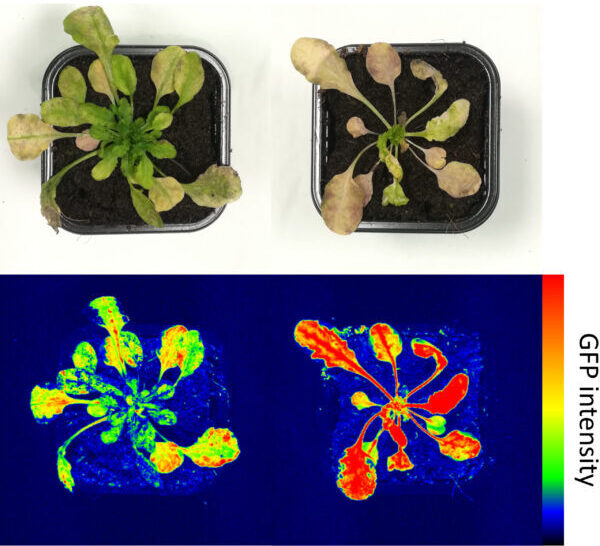 When a knockout is an Achilles’ heel: resistance and susceptibility to potyviruses – Molecular Plant Pathology highlight.

Genetic resistances to pathogens can be engineered in plants, but can they have side-effects? A study on resistance to a major group of viruses in Arabidopsis points to some potential drawbacks associated with ‘knocking-out’ susceptibility factors and suggests using genome editing as a safer approach to mimic natural resistances.

For the breeder, developing genetic disease resistance in crops is a major challenge to ensure plant health, while limiting the use of pesticides. Among the strategies used, resistance by loss-of-susceptibility can be a successful approach. It consists of suppressing or modifying a host factor (a ‘susceptibility factor’) that is necessary for the pathogen. Once modified, the host factor can no longer be recruited by the pathogen, and this results in plant disease resistance.

Potyviruses impact many important crop plants and cause symptoms in ‘susceptible’ plants such as yellowing (chlorosis), deformed growth, stunting and death (senescence). For potyviruses, the eIF4E genes are a major source of natural resistance in host plants. This potyvirus resistance is caused by changes in the eIF4E genetic code which result in amino acid changes in the encoded proteins (non-synonymous mutations). As a result, the encoded eIF4E proteins can no longer be recruited by the virus.

But some crops, also targeted by potyvirus, have no such resistance. This study tackled the question: how could eIF4E-based resistance could be introduced? Could the answer be the straightforward biotechnological approach of knocking out the eIF4E? No susceptibility factor, no virus!

eIF4E are both susceptibility factors and essential proteins for plant development

The challenge is that eIF4E proteins play a key role in plants: they initiate translation of messenger RNA into proteins. They are therefore very important for the plant and inactivating eIF4E factors can have unexpected outcomes, resulting in deformed plant growth (see inset image, right) or lethality. Luckily, there are several genes encoding those 4E factors in plants, so de-activating a single gene does not necessarily kill the plant. Finally, many ‘natural’ mutations in eIF4E genes alter the code subtly without disrupting their functionality. Established plant breeding methods can select plants that contain those ‘resistant’ eIF4E genes.

To understand how eIF4E genes can be used to create virus-resistant plants, experiments have been conducted in the model plant Arabidopsis thaliana (see inset box at end of article). From an applied point of view, this study adds to previous findings in Tomato and Pepper which suggest that knocking out eIF4E susceptibility factors should be avoided in plant breeding.

Surprisingly, eIF4E gene knock-outs can potentially affect resistance spectrum and durability to potyviruses. For example, ‘knocking-out’ one eIF4E gene actually exposes the plant to other viruses that target translation initiation factors and cause disease.

Zafirov et al. challenged plants ‘knocked-out’ for eIF4E1 and resistant to clover yellow virus, with another potyvirus (turnip mosaic virus – that requires a slightly different eIF4E protein). The infected mutant plants were MORE affected by the virus than wild-type plants. This unexpected ‘hyper-susceptibility’ was characterized by strong disease symptoms including acceleration in tissue senescence, stoppage of development, and increase in the virus load (see image, right).

Solutions with CRISPR-Cas9 base editing for virus-resistant plants

But solutions exist! Zafirov et al. show how CRISPR-Cas9 base-editing can mimic a ‘natural’ mutation in eIF4E1 (from the unrelated species Pea) to resist viral disease. In the presence of the CRISPR-Cas9 edited eIF4E1 gene, plants do not show any hyper-susceptibility to turnip mosaic virus and they retain resistance to clover yellow vein virus.

The use of naturally-evolved functional eIF4E genes, that resist disease without losing the translation initiation function, is an obvious alternative to gene knockout. Their use could hold the key to safeguarding plants from viruses that, by targeting other eIF4E genes, could severely limit the options for disease control. In the absence of natural disease-resistant gene copies (alleles) in the crop-related diversity, genome editing technologies are likely to emerge as a major tool to supply such alleles, by copying resistance mutations across species.

Delyan Zafirov, Nathalie Giovinazzo, Anna Bastet and  Jean‐Luc Gallois published this study in Molecular Plant Pathology Journal. Kyoka Kuroiwa contributed to the writing of this blog. This work has been conducted at the Plant Breeding station INRAe Avignon GAFL:

When a knockout is an Achilles’ heel: Resistance to one potyvirus species triggers hypersusceptibility to another one in Arabidopsis thaliana.

Arabidopsis thaliana is a very good model to study resistance to potyviruses and to understand mechanisms and breeding strategies that can be translated to crops, with two main genes encoding slightly different 4E proteins: namely eIF4E1 and eIFiso4E. The presence of different 4E proteins offers diversified baits to viruses: some will be able to hijack eIF4E1, some eIFiso4E, and others both. Hence, knocking out eIF4E1 results in resistance to one potyvirus species, such as clover yellow mosaic virus (ClYVV), whereas knocking out eIFiso4E leads to resistance to another one, turnip mosaic virus (TuMV). This image (inset right) displays: 1. The phenotype of wild-type, eIF4E1 gene knock-out and eIF4E1 gene edited TuMV-infected plants (upper row); 2. Imaging of TuMV virus accumulation using GFP imaging, from green to red (middle row); 3. Schematics of the plant eIF4E composition and susceptibility to the two potyviruses, clover yellow vein virus (ClYVV) and turnip mosaic virus (TuMV) (lower row). The wild-type plant (left column) is susceptible to both ClYVV and TuMV, which hijack respectively translation initiation factors eIF4E1 and eIFiso4E. Knocking-out eIF4E1 (middle column) makes the plant resistant to ClYVV, but at the expense of an over-susceptibility to TuMV that over-accumulates in the plant. Mimicking a natural eIF4E1 resistance allele by CRISPR base editing (right column) provides resistance to ClYVV while avoiding the over-susceptibility to TuMV.

TITLE IMAGE: Arabidopsis thaliana plants demonstrating the “Achilles’ Heel Effect”. Knocking-out eIF4E genes as susceptibility factors for one virus causes plants to be hyper-susceptible to others (right). The ‘wild-type’ plant (left) is susceptible to both clover yellow vein virus and turnip mosaic virus.  These plants are infected with GFP-tagged turnip mosaic virus (fluorescence images displayed in lower row) which demonstrates a higher viral load in plants lacking eIF4E1 gene (right).  All images used with permission of the author.