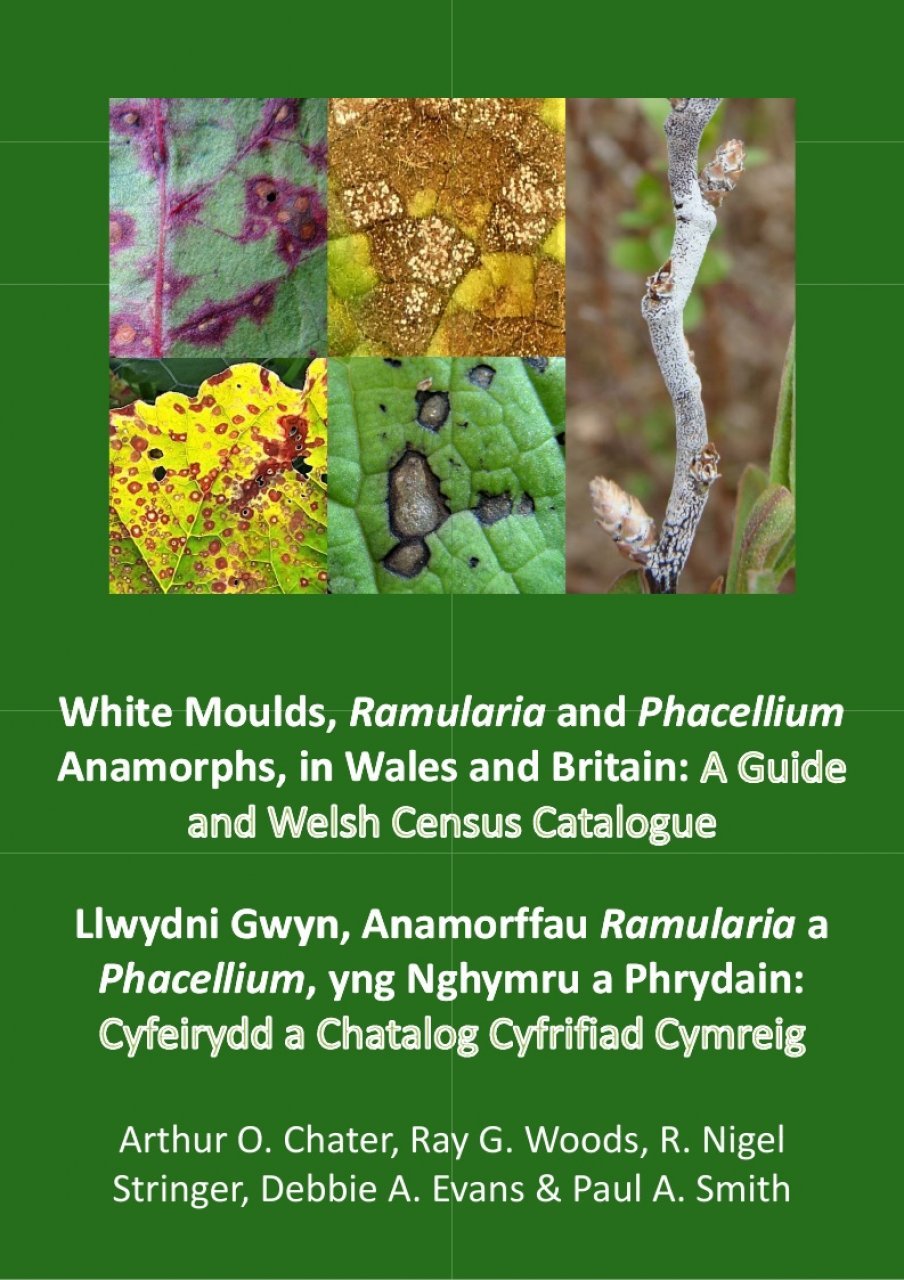 Some ten years ago a group of five of us with mycological interests in phytoparasitic fungi got together to produce a Red List and Census Catalogue of Rusts in Wales. We followed this up with a similar book on Smuts.

Finding that there were insufficient records of Powdery Mildews to safely evaluate threat statuses, we rather altered the focus in this book. We created more of an identification guide to stimulate re cording, giving key characters to help towards identification and covered the extra species in the rest of Britain as well as those in Wales (for which we again provided a Welsh vice-county census catalogue). Our fourth book covered Downy Mildews and White Blis ter-rusts (which are not actually fungi!) and was even more aimed at encourag Our fifth one, which the BSPP is gener ously helping to fund (the cover is pic tured below), continues this trend and aims to raise interest in the genus Ram ularia, White Moulds. We were fortunate in that Braun’s 1995 & 1998 Monograph forms a good taxonomic basis. Our group is fortuitously distributed over the whole of Wales, with Debbie Evans in the north, Arthur Chater in the mid west, Ray Woods in the mid-east, Nigel Stringer in the south- west and Paul Smith formerly in the south-east. The White Moulds are a comparatively ne glected group in comparison with Rusts or Smuts, and are scarcely known to non-mycologists, yet they are common and conspicuous, and a number of them are very significant as crop and horti cultural pathogens. Chief among these in Britain are R. collo-cygni on Barley, R. beticola on Fodder Beet, R. deusta var. alba on Sweet Peas, R. grevilleana on Garden Strawberry, R. onobrychidis on Sainfoin, R. pratensis on Rhubarb and R. vallisumbrosae on Daffodils. Kernaghan et al. (2017), however, pro vide a more positive picture of Ramular ia spp. in contrast to their role as injuri ous parasites. Their study of endophytic fungi in wild and cultivated Grape spe cies in North America demonstrated a significant role for Ramularia spp. as asymptomatic endophytes in wild vines, providing protection against damaging pathogens and a potential role as bio control agents in cultivated vines. Saik konen et al. (1998) review the role of endophytic fungi in general and demon strate the seamless transition in many species to that of pathogen brought on by aging plant tissue or external stress ors of the host plant. We clearly have much to learn about the wider role of these fungi.

The White Moulds we cover in the book are all anamorphs and encompass the hyphomycete gener ntry, most with illustrations of the general appearance as well as the mi croscopic characters, and for British species not in Wales, as well of course as for the Welsh ones, we provide guides to identification. The census cat alogue gives occurrences of the fungus species on all their different host spe cies in the thirteen Welsh vice-counties, and appendices cover fungus/host oc currences in England, Scotland and Ire land. We have chapters on finding the fungi, on collection, preservation and identification, and also discuss the prob lems of the conservation in a group of fungi like this.

Most of the species are host-specific, and recent taxonomic work using mo lecular sequencing tends to confirm and extend this characteristic. Identification is thus becoming easier in theory, as suming correct identification of the host, but we are keen to discourage hasty and superficial naming. The only species on pteridophytes in Wales are R. asplenii on Wall Rue and R. scolopen drii on Hart’s-tongue, but given the abundance of Bracken and Buckler ferns in Western Europe, it seems strange that there appears to be no more than a handful of records of Ram ularia spp. on the dead fronds of these hosts, all the records on these other ferns being from mainland Europe. The only species on the Grass family in Wales are R. collo-cygni on Barley and R. holci-lanati on Yorkshire-fog, but R. pusilla occurs on five other grasses in the rest of Britain. Ramularia species are rare on woody plants, the only such species in Wales being R. rosea on Grey Willow, R. rufibasis on Bog-myrtle and R. sambucina on Elder, although in the rest of Britain species occur on Asian Barberry, Alder, Fatsia and Rowan. In Wales herbaceous perennials and bien nials provide the majority of host spe cies for Ramularia with 57 out of a total of 67 White Mould species occurring on hosts with this life form. There seems little doubt that the most productive habitats for a diversity of Ramularia species are roadside and pathside hedgebanks and verges with over 44 species noted in these habitats in Wales; gardens, churchyards, sand dunes, weedy arable and fallow fields, waste ground and to a lesser extent unimproved pastures and fens are also rich in species. Woodlands, mires and improved pastures are less productive. We do not have enough information about White Moulds in semi-natural or unmodified upland habitats in Wales to comment on the significance of such areas.

The British Mycological Society gave us (as the Welsh Rust Group, now the Welsh Phytoparasitic Microfungi Group) their Field Mycology Award in 2019 for promoting the recording, conservation and taxonomy of parasitic fungi, togeth er with our role in education by holding training sessions, field meetings, giving lectures and publishing articles, scien tific papers and our first three books. All four of our published hard copy books are also available as free downloads from Dr. Gareth Griffith’s website www.aber.ac.uk/waxcap/downloads/ and this Ramularia one will be too when it is published and for sale in hard copy in spring 2021. Hard copies of the last three titles are available from raygwoods@aol.com. We gave free hard copies of them all to the Welsh Record Centres and Field Studies Council cen tres in Wales, as well as to the Botani cal Society of Britain and Ireland’s County Recorders and National Botanic Gardens among others. We are ex tremely grateful to the BSPP for helping us to produce this fifth book and to be able to distribute it both free and at a low cost to mycologists and the more general public.