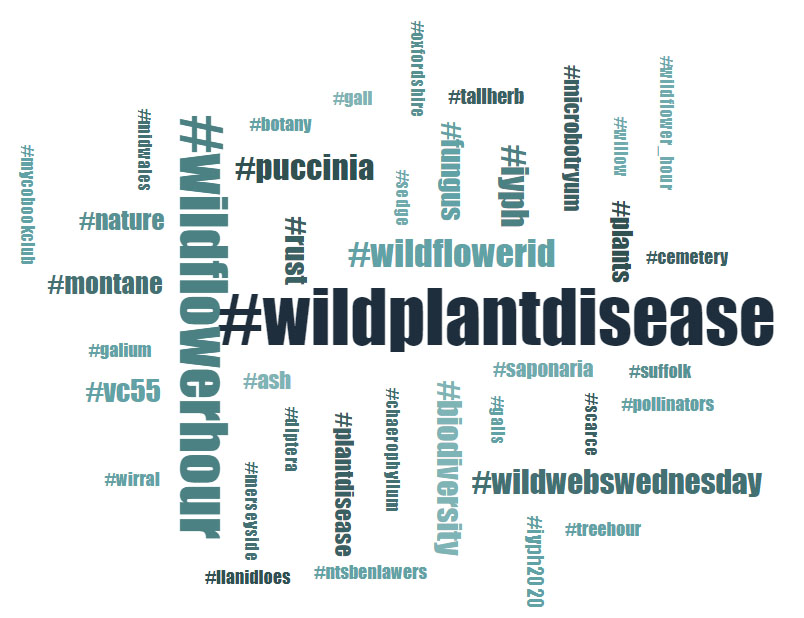 #wildplantdisease – Up to 4 million views on Twitter for plant pathology on ‘wild’ or ‘native’ plants in the UK and abroad.

This blog is part of a series, click here to view all blogs in this series

Look out for rusts, blotches, streaks, mottles, galls & mildews on wild plants, that’s the challenge for #Wildflowerhour this Sunday as we team up with the wonderful British Society for Plant Pathology to explore the amazing world of #WildPlantDisease! https://t.co/jIDjIqvJ5R pic.twitter.com/jlhhWpyPPk

Last week’s challenge (launched 10th August) was in contrast to the usual wildflower spotting challenge, where followers of @wildflower_hour spend an hour posting rare, beautiful and interesting photos of wildflowers taken from across the UK and Ireland.

Over 560 pictures were Tweeted for #wildplantdisease of which a small portion are highlighted: Insects stole the show with their flamboyant galls, for example: the perfectly red and round Rose pea gall on Dog rose as posted by @seed_ball; the subtle Artichoke galls on English Yew caused by gall midge Taxomyia taxi posted by @nervousbotanist and the exotic Robin’s Pincushion on Rose caused by the tiny larvae of a gall wasp posted by @ChicksChange. Not to mention the rare Crimson Harebell aphids shared by @Joshual951. Prolific leafminer infestations, mainly on Horse Chestnut, were posted from multiple tweeters. Thankfully, @Entoprof was on-hand to confirm many infestations and @AndrewSalisbur2 to ensure accurate identifications.

Fungal diseases were perhaps most dominant and Smuts featured highly as floral pathogens, causing black sporulation of the anthers of many wildflowers – particularly White and Red Campion. Rusts and Powdery Mildews were to be found on a range of wildflower plants from Deadnettle and Hogweed to Oak. The aecial galls of rusts were not to be confused with the impressive spangle galls of a number of wasps on the undersides of afflicted leaves. Tar spot was to be found on many tree leaves.

Oomycetes or water moulds – a group of micro-organisms not to be mistaken for fungi – made an appearance mainly through Albugo candida or White blister rust, seen above on ‘Honesty’ seed pods.

@luca_steel of the #PlantDefenders with Girlguiding highlighted her first ever #wildplantdisease find of Phragmidium violaceum or Violet Rust on Bramble and @wheatpath Frederic Suffért featured a number of beautiful wild plant diseases found in France, including symptoms on plants alongside microscopic images of the microorganisms responsible.

Viruses appeared with a range of symptoms from striking vein yellowing to deep red bramble leaves pointed out by @Blisteredcanker and @plantpathdog, with comments from @Prof_GD_Foster. 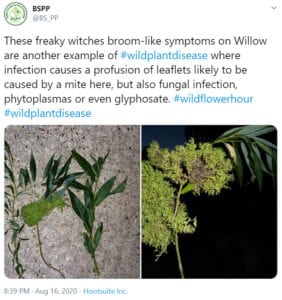 Weird and wonderful plant disease symptoms were spotted including Eric Boa’s Witch’s broom-like symptoms on Willow (tweeted by @BS_PP) and Fay Newbery’s @FayrnHawk spot of Witch’s broom on Hornbeam. There could have been more identification of bacterial diseases…but maybe that is for another time. See @CuongVHan’s tweet from South Korea/Vietnam as a last minute entry. 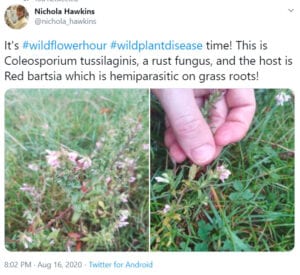 Highlighting biodiversity and the ecological complexity of the #wildplantdisease world, Nichola Hawkins spotted a rust infecting a hemiparasitic plant: Red Bartsia is a plant which grows from the roots of grasses and Coleosporium tussilaginis the rust fungus which infects this plant.

To top the insects and micro-organisms threatening wildflower health during #wildflowerhour @PietroSpanu shared his discovery of the fully parasitic plant Dodder (or Cuscuta) from the banks of the Thames.

Sometimes the plant Is the disease.

In this case dodder (Cuscuta) pic.twitter.com/G4IZRc2Sj7

Wildflowerhour is an initiative based in the UK, supported by the Botanical Society for Britain and Ireland, but #wildplantdisease included tweets from across the globe and across time-zones (hence the hour was extended!).

With thanks to Nichola Hawkins and Joshua Styles as wildflower and plant pathology specialists, and Rebecca Wheeler who runs the @wildflower_hour account.

“I’m Nichola Hawkins. WildFlowerHour followers might know me as a keen amateur botanist and member of the Wild Flower Society. BSPP members, on the other hand, might know me as a postdoc researching plant pathogen evolution and fungicide resistance. I’m really excited about the opportunity to bring together my interests in wild flowers and plant pathology for the #WildPlantDisease challenge!” 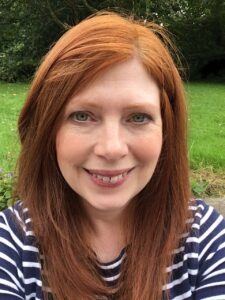 “I am a horticulturist and forest school practitioner and I am very passionate about wildflowers, in particular native orchids. I am completely obsessed with all nature and I am particularly fascinated with how different species are interlinked and dependent upon one another. I am really looking forward to the #wildplantdiseasehealth challenge this Sunday, a very exciting new challenge for #wildflowerhour!!” 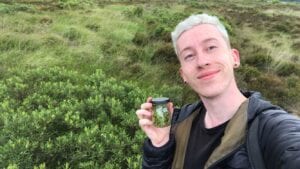 “Hi, I’m Josh Styles and I’m a 25 year old ecologist and general plant obsessive. I’ve had an interest in plants since around the age of 6, and over the past couple of years have developed a keen interest in smuts and rusts” 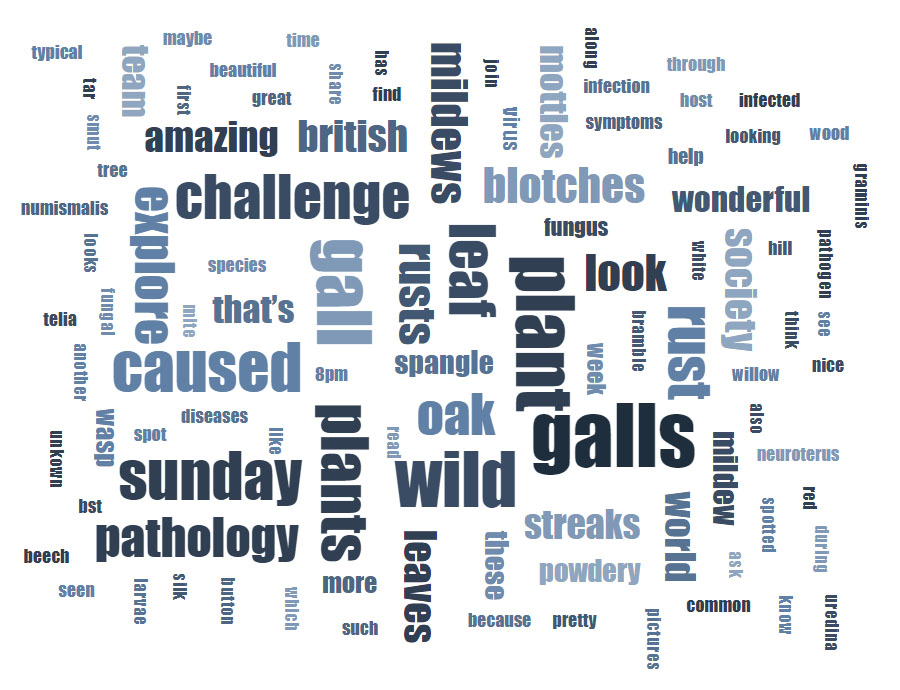 *Estimations of accounts reached and potential views are based on number of followers for each user tweeting or retweeting #wildplantdisease. Data taken from Twitter.com and socialbearing.com.