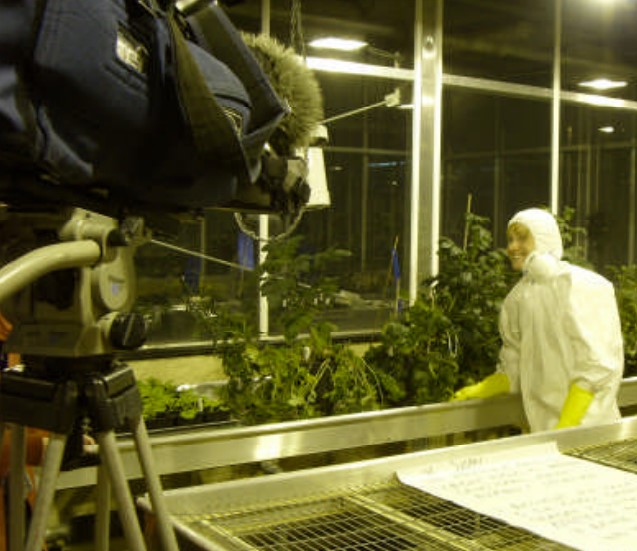 Written by by Eleanor Gilroy at SCRI. This was funded by the BSPP Plant Pathology Promotion Fund, click here to read more about this funding opportunity.

Suddenly, one late November day at work, I was asked by Vivian Blok if I would like to make a science exhibit about my work for a ‘women in STEM’ event at Dundee Sensation Science Museum. I thought it sounded like fun but was disappointed to find out that there was no budget to help make anything. So I racked my brain for some exhibit ideas. I had lots of ideas for topics to cover but not any decent game ideas – I was stuck! I then arranged to visit my good friend Lindsay Hogg from my BSc Genetics days at Edinburgh University who works for the Glasgow Science Centre (GSC). She has been lucky enough to design museum exhibits for years and promised to help me.

When I went to the GSC to meet her and tour some of the biology exhibits I had great fun but most were far too expensive to recreate on a small budget. Then she showed me the Stem Cell “you choose the news” game she had designed. The game involved a mixture of personal interviews, a newsreader, a roving reporter and media clips containing a mixture of positive, negative and neutral science film clips. The aim of the game was to let children choose the string of clips they would like to combine together to make a news reel, ultimately trying to achieve a balanced report. 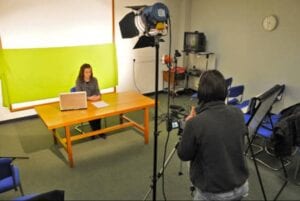 I could instantly see the potential for discussing GM technology in this form as it has had such a biased coverage in the press and I have always felt the yearning to have a go at teaching the public about it. There wasn’t much time and budget was a big issue. Lindsay had said “all you need is a camera crew, a programmer, a touch screen monitor and some willing volunteers”. I knew this was something I could have a go at finding.
Firstly, I discovered that SCRI owned two touch screen monitors and that the GSC programmer agreed to help me if I found some money to pay him, which made me very happy. Later that December I was at a SCUBA-diving Christmas party. As soon as my friend Jenny Ross, a TV camera operator by profession, walked into the room a light bulb went of in my head and I got chatting to her about the idea. Jen said that she would love to help and could do so for free as her own personal development project. The only thing I15 needed was a significant and recent anniversary or event to have happened recently in the world of GM on which to base the news report. I thought that the pesticide ban going through the EU parliament at the moment was perfect because we could easily bring plant diseases into the story and that would make BSPP the perfect funders for the game. I was so excited by all of this that I wrote the script and the BSPP “Plant Pathology Promotion Fund” application over my Christmas holidays. After Christmas, I managed to persuade members of staff at SCRI to play parts in the game or help behind the scenes – this included the BSPP members, Miles Armstrong, Paul Birch, Vivian Blok, Susan Breen, Ingo Hein, Hazel McLellan, and Amarnath Thirugnana Sambandam. I found out I had the money by the end of January so work had to start right away for the game to have any chance of being ready for the 8 th of March.

So the race against time was on! I spent February finalising scripts with people, designing story boards, picking scenes, persuading innocent scientists at SCRI to test their acting skills and generally organizing everyone to coincide on the same two evenings. We had a great laugh both filming and watching the scenes over again! Jenny took them away for a week of severe editing and then we promptly sent them off to the programmer on the 27th of Feb. A working version of the game was in my hands by the start of the week before the STEM event. Phew! It has been a bit of a mad rush and now I only had to worry about what the public and children would think of it and whether my future life would now be spent receiving hate mail and checking for bombs!!!

Once the game was completed, SCRI agreed to host the game online on their website. http://www.scri.ac.uk/ knowledge/games/youchoosethenews. The Women in STEM event at Dundee Sensations had 360 visitors on Sunday the 8th and 340 on Monday the 9th of March. The game was played at least 30 times by secondary school children and families. Sensation liked the game so much that they may install it as a permanent feature at their museum and there is still a chance that Glasgow Science Centre will do the same. Learning and Teaching Scotland have also been contacted to try and spread the use of the game through schools in Scotland. SCRI are also planning to take the game to other outreach activities such as the Royal Highland Show, the Edinburgh Science Festival, Gardening Scotland and the Dundee Flower and Food Festivals.

All in all, I think the game is a success and I couldn’t have done it without the support of the BSPP- Thank you!! If anyone wants to use the touch screen version of the game at an event please contact me.

This was Eleanor Gilroy, Reporting live from SCRI for the BSPP